﻿
Roger Dicken's skills as a sculptor, designer and fabricator of creature effects were on show in Alien, for which he built the very first Chestburster and Facehugger. They're still scuttling around our nightmares, but weren't the first monsters that he'd made for horror films... 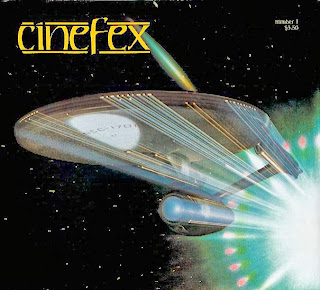 Star Wars and Close Encounters of the Third Kind showcased visual effects that had never seen before. Specialist magazine Cinefex launched in 1979, to describe in detail breakthrough effects work in the latest movies. It devoted issue 1 to Star Trek - The Motion Picture and Alien.

Pictured amongst the genre heavyweights working on Alien, was Roger Dicken, who I recognised from his work on children's films. Here he was, having built the first Facehugger and Chestburster, creatures that immediately lodged in our psyches and grew into long-lasting cultural icons of fantasy fiction.

I'd like to look back at some of the other highlights of his previous ten years of movie work, most of it using similar effects techniques to his work in Alien. Dicken's career is an example of the many who alternately worked on TV series and low-budget British features, as well as 'Hollywood' blockbusters that were filmed in London studios. 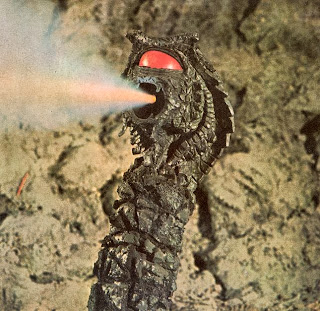 One of my earliest movie memories is this Martian rock snake that loomed up in the cinema and opening one huge red glowing eye before unleashing a torrent of fireballs! It appears halfway through Thunderbirds Are Go (1966), the first of two Thunderbirds feature films that presented the TV characters in widescreen and colour. I've only recently learned that Roger Dicken made these creatures, based on Derek Meddings' design. He seemed to specialise in creatures that appear to be made of rock.

Stanley Kubrick was fully aware that some of the best model makers in the business had worked on Thunderbirds. He employed Roger's sculpting skills for about a year to help build the surface of the Moon seen through the portals of some sets, early in 2001: A Space Odyssey (1968). Dicken also sculpted some glittery, humanoid aliens when Kubrick was still planning to show them at the climax of the film.

He also worked on practical effects in horror films, like the lightning climax in Hammer's Scars of Dracula, for which he also built a large bat (above), capable of 'biting' and licking blood. He'd previously built the moth monster for The Blood Beast Terror (1968). The same year, he worked on practical effects for Witchfinder General (1968) for the hanging and burning scenes, as well as the very effective and subsequently censored 'pricking' tortures. He later sculpted the impressive, evil-looking skeleton for The Creeping Flesh (1973).


Making the models of a variety of dinosaurs, including a plesiosaur and a chasmosaurus, led to an Oscar-nomination on Hammer's When Dinosaurs Ruled The Earth. Superbly detailed models and impressively smooth stop-motion animation by Jim Danforth (above, right) easily rivalled Ray Harryhausen's work at the time. 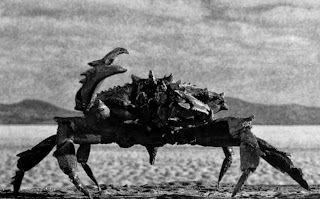 Dicken's love of rocky-looking creatures can be seen in the design of the large crab monsters (above) that hunt cavemen on the beach. 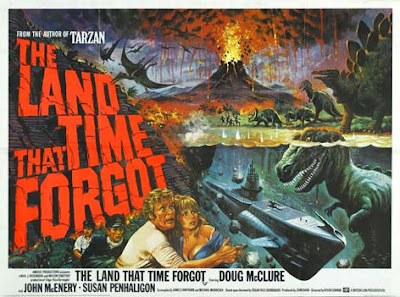 I was first aware of Roger's work when he briefly became a familiar face as a dinosaur-maker for Amicus Films' The Land That Time Forgot. He was photographed with his creations for magazines and newspapers, as well as appearing on children's TV in Clapperboard (I think). While stop-motion animation was still the most convincing way to show huge prehistoric animals, the producers at Amicus couldn't afford the time and expense.


Instead, Roger suggested large, realistic puppets, operated from the inside or by simple rod and line manipulation - methods where there was very little to go wrong that could hold up filming. He didn't even trust remote-control technology. Each model was around four feet long and could be operated from the inside, or underneath.

But once he'd made them all, including two triceratops, and a pair of tyrannosaurs, the effects team decided they would operate the models themselves, annoying Dicken so much that he turned down all work on the follow-ups The People That Time Forgot (which featured far fewer monsters) and At The Earth's Core (which overused men-in-suits). 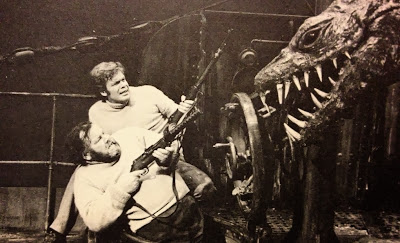 For The Land That Time Forgot, it was James Bond veteran John Richardson who built all of the full-scale animals, like the pterodactyl and plesiosaur (above), which had to interact with the cast. 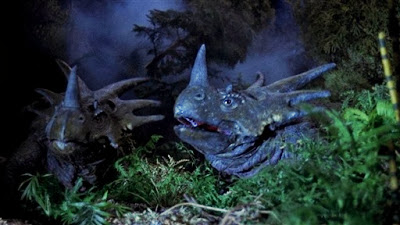 Roger built all the scaled-down creatures, that were then placed among matching-scale table-top jungles, looking especially realistic in the night-time scenes. Above are two styracosaurs caught in the submarine's spotlight. The ensuing mortar attack is quite upsetting, as the animals are blown to pieces.

The Land That Time Forgot was a 'U' certificate (the equivalent of a 'G' now) but the story is quite downbeat, sticking closely to Edgar Rice Burroughs' novel, with a high body count decimating the characters. 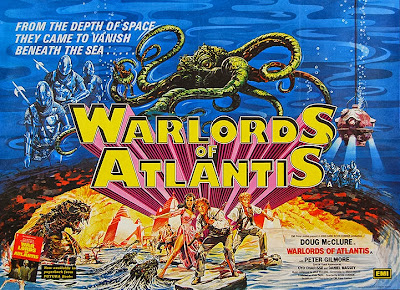 Despite the obviousness of the techniques used, it was fast-paced fun and hugely popular with children. The Land That Time Forgot led to three similar films, Dicken working on the last of them, Warlords of Atlantis (1978), where he designed and built mythical creatures living around the underwater city.

Again, the puppets were manipulated by hand and, again, he wasn't allowed to do it himself. Again, actors mostly interacted with the models using back-projection techniques that were fooling nobody, not even the children.

But Roger's fine detailing made the creatures look exceptionally good in publicity photos, especially this giant octopus that engulfs a ship. 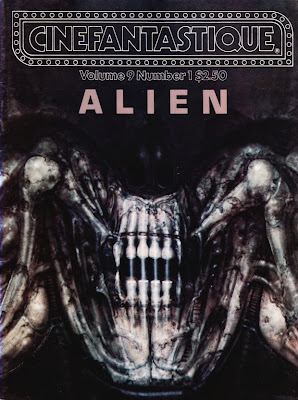 The same year, he started work on Alien, hired to build the Chestburster, Facehugger and humanoid stage of the alien. As is often the case, he was having to make three-dimensional objects from someone else's (two-dimensional) sketches, left to add his own design ideas and how they might function.

Being such a high-profile production, and with director Ridley Scott terrified that he'd get a monster that would get laughs, it was an exceptionally high pressure assignment. Dicken was being supervised by a committee, when he was used to working alone. There was a meeting with writers, producers and the director, where they all fired their ideas at him at once, about what the Facehugger should look like. He was at a loss how to proceed. Dan O'Bannon thankfully combined all the suggestions from the meeting into one drawing, something Dicken could try and work with. 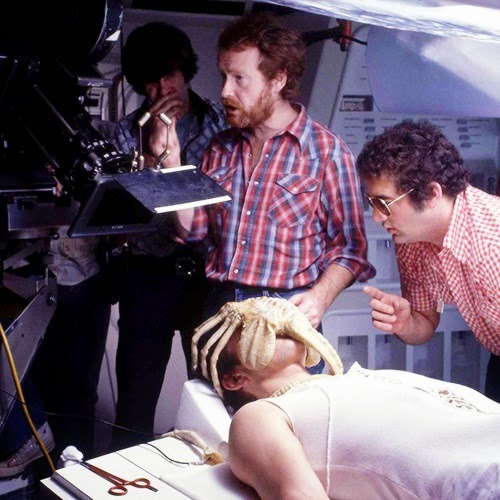 Giger's idea was something much larger, but it was simplified into just hands and a tail. Giger approved O'Bannon's design and Dicken's work. Dicken had wanted to emphasise the creature's knack for self-defence, by adding sharp barbs to the tail, preventing anyone pulling it off. He also had to rig his Facehugger model (above) so that it could 'bleed' acid in this scene.

The Chestburster had originally been envisaged by Giger as something looking like a blind, fat, featherless turkey with teeth. Dicken made something faithful to that design, with the neck wide enough to fit his hand inside, but Ridley felt it could look too comical.

Dicken streamlined it so much that his hand no could longer fit inside, and the necessary mechanisms barely could either. The outside was finally so smooth and organic-looking that it was also very hard to hide any joins. His idea to give it little arms so that it could pull itself out of the chest was rejected. But this time he got to operate his creation for the infamous scene in the film (above). 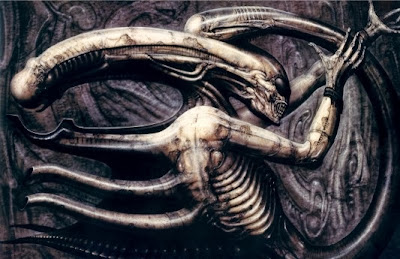 Dicken took the first attempt at building the full-size alien, working with Bolaji Badejo's body-mould to make a faithful representation of the phallic creature that Ridley liked so much in Giger's artbook, 'Necronomicon' (above). But keeping to that same scale, the head was quite enormous.

According to the Cinefex article, owing to the strain of working for a 'committee' as well as building the smaller creatures, Dicken quit his work on the final-stage, humanoid alien. An unpopular move, but he was exonerated when the project finally needed H.R. Giger to come over from Switzerland, plus a whole team working under Carlo Rambaldi, to complete the suit. Rambaldi's expertise provided the immensely complicated jaw mechanism inside the head.

A filmography to be proud of. Dinosaurs, vampire bats, crab monsters, rock snakes and xenomorphs. I've enjoyed his work in many movies, whether I knew it at the time or not.


(I refered to several contemporary magazines; interviews with Roger in Starburst #15, Film Review magazine (September, 1978) and a great pre-Alien career article in Photoplay Film Year Book (1979). As well as the Alien coverage in Cinefex #1, and Cinefantastique volume 9, number 1. Though he's barely mentioned in the original Book of Alien!

Here's also my look at the earliest Alien merchandise and magazine coverage.