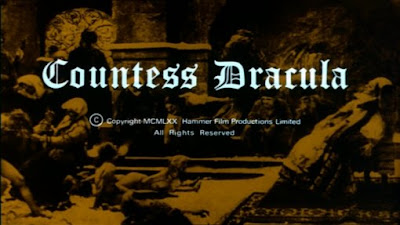 The legend of Countess Dracula has inspired several movies, though I've only seen the Hammer version (soon to be available on blu-ray). Based on the story of Elisabeth Bathory, charged with being a serial killer who bathed in the blood of her female victims in order to retain her youthful looks. Ripe in allegory about the ruling class, it makes a superb story. But like Vlad Tepes, the ruler who inspired Dracula, was she actually a monster? 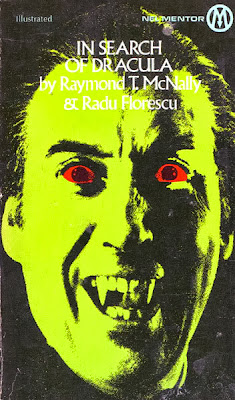 My earliest guides on the roots of vampire legends were 'The Natural History of the Vampire' (Anthony Masters, 1974) and McNally & Florescu's 1972 'In Search Of Dracula' (revised and updated in 1992). These didn't dissuade me that vampires could exist and that Count Dracula was indeed Vlad The Impaler (as depicted in Francis Ford Coppola's Bram Stoker's Dracula). Their popular research meant that any castles that Vlad Tepes once lived, or even (possibly) visited, are now nicknamed 'Castle Dracula' (despite Bram Stoker never having visited the country) and provided a huge boost for tourism in Romania. But holidaymakers are actually getting a disrespectful fantasy about that country's revered warrior-leader, since Vlad orchestrated the defence and uniting of their country.

Raymond McNally later explored the story of Countess Dracula, finding just as many elements of Bram Stoker's character and mythology in her story. Vlad Tepes may have decapitated his enemies and impaled them on stakes, but that's the opposite of what a vampire does. There's more in Elisabeth Bathory's story to inspire the habits of the Count, and McNally finds proof in Stoker's private notes while researching Dracula, that he'd referred to Sabine Baring-Gould's 'The Book of Werewolves' which included an account of her legend as well. This is the crux of his 1983 book 'Dracula Was A Woman'.

The first half recounts the legends of 'Countess Dracula' and the highlights of the transcript of Elisabeth Bathory's trial. Allegations that the countess drank the blood of virgins to retain her youth are mirrored in Stoker's novel, as the Count becomes younger during the story. The stories of her also eating flesh could have been transposed (and diluted) to Renfield's habit of consuming live animals. He scrutinises every aspect of the history books to find parallels in Stoker's novel and other aspects of vampire lore, but was Countess Bathory actually like this?

It's still more even-handed that Valentine Penrose's 1962 'Bloody Countess', which I didn't realise was written so long ago from such an opinionated viewpoint (he refers to lesbians as "perverted"...) 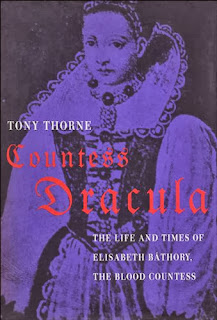 I started into Tony Thorne's book 'Countess Dracula' (also published as 'Blood Countess') expecting the full horrendous tale of medieval ghastliness. But the crimes described are only what was alleged at the trial - that up to 650 girls were tortured, killed, drained of blood and partially eaten. Their bodies were hidden or strewn across the countryside, this being a time of war when it was possible to get away with murder. Her aristocratic position also meant that she was the law in her own estate. Who'd dare challenge her?

Thorne methodically looks at the surviving records, which aren't many. Because of the wars in that part of Europe, many records have been destroyed. The remaining clues point to a mass murderess, or, an innocent woman defrauded by neighbouring countries for her lands and wealth. With a superstitious population, it would be easy to accuse her of witchcraft and vampirism than to disprove it. With painful capital punishment awaiting anyone who didn't cooperate, there were plenty of witnesses around to point the finger of blame away from themselves.


Many famous horror films start with a title or voice announcing that it's "based on a true story". The Texas Chain Saw Massacre, Picnic At Hanging Rock, Wolf Creek... Or their publicity machine says it for them - The Exorcist, The Amityville Horror... But once you get down to the original story, you've not been shown anything that actually happened. Millions read the poster. Thousands see the films. Not many bother with the truth.

In the case of the countess, we don't know what happened, but the accusations and legends make a better story. At the very least, the accusations must be wildly exaggerated. To assume that the gossip and surviving court testimonies are all true is to accept only one side of the story, political subterfuge and ancient superstition.