ON THE BEACH (1959) - post-apocalyptic waiting game 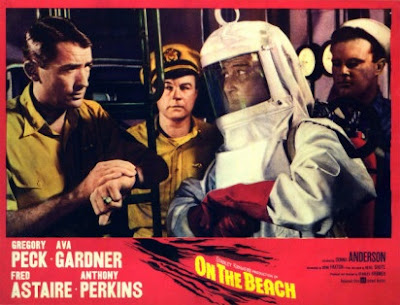 Before 'post-apocalyptic' meant an action movie...

There has just been a nuclear world war. Anyone in the countries involved who didn't get hit by one of the hundreds of direct strikes has succumbed to the deadly radioactive fallout. Most of these were in the northern hemisphere. The winds have yet to carry the invisible danger to Australia, where a lone submarine crew assembles for a mission to check for any remaining life, especially the source of a mysterious radio signal. If nothing can survive on the planet, then there's no hope for anyone...

I'm no scientist, so I don't know whether this scenario is accurate or not. Is there definitely no chance of escape from a release of airborne radiation on that scale? No place to hide while radiation levels drop? Later global catastrophe movies like the biohazard thriller Virus (1980) assume that the North and South poles remain safe. Terminator 3 and Damnation Alley (1977) have faith in nuclear bunkers deep underground, that might enable a few survivors to last out.

In On The Beach, made at the end of the 1950s, the premise is that no-one will escape the fatal levels of radiation that have been released in a nuclear war and it's only a matter of time before the weather circulates it everywhere on Earth. Unlike the atomic mutation movies unleashed throughout that decade, here is an invisible opponent that cannot be blasted with flamethrowers or even more missiles. 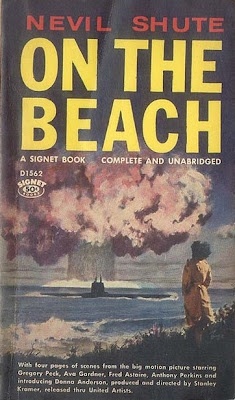 Unusually, it doesn't even begin with a montage of stock footage mushroom clouds. If you don't pay attention to a radio broadcast early in the film (or haven't read Nevil Shute's book), you'll not know that there's been a nuclear war! I remember watching this on TV and being puzzled for a while as to what was going on, it's such a subtle set-up. We're in the same shoes as the characters - they've seen no explosions and are waiting for news, or evidence. 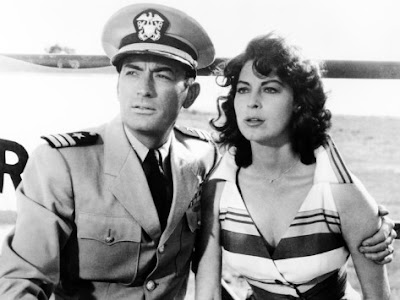 There's little to say that this is set in Australia either. The characters are either American actors or have British accents. The clue to the location is the theme of 'Waltzing Mathilda' in the soundtrack. The calm reaction to the inevitable seems very British. This is in complete contrast to the later post-nuclear movies of Oz, particularly the Mad Max trilogy, which is all about heroism, high adventure and car chases. Examples of where the apocalypse is taken for granted.

There isn't even a breakdown of society, like in The Day The Earth Caught Fire (1961) where the masses get drunk and start killing each other. On The Beach imagines a very resigned, logical mass suicide as the only option. Unless there's any good news from the submarine mission... 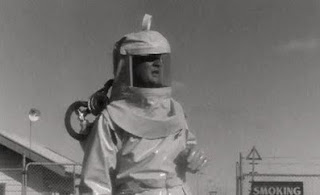 In the meantime, everyone goes about their daily routines, keeping civil to the last. A mass resignation to the inevitable. The terrible implications aren't talked about directly, instead there's an acute double-edge to every conversation. Each scene has an implied ironic or tragic kick. The effect is increasingly terrifying. I found it intensely depressing and, even though I'd seen it before, it's stayed with me since.

At this time, director Stanley Kramer was tackling gigantic social issues in major films every year. Race relations in The Defiant Ones (1958), religion versus science in Inherit the Wind (1960) and Nazi war crimes in Judgement at Nuremberg (1962). No wonder he made a comedy in 1963! 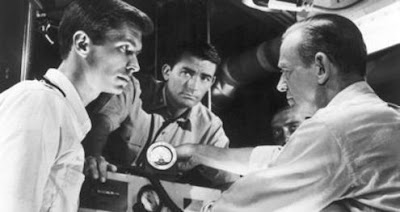 For our last days on Earth, we could do far worse than spend it with Gregory Peck, Ava Gardner, Anthony Perkins (just before he was typecast by Psycho) and Fred Astaire (in an early non-singing, non-dancing role). Pleasant company in an awful situation.

On The Beach an early mainstream film to tackle this unthinkable subject, made over twenty years before the TV movies The Day After and Threads showed what a nuclear war could look like. It was also released five years before Fail Safe and Dr. Strangelove, which described how a world war could start. This was produced when the man-made doomsday scenario first loomed large. Now, the concept of nuclear destruction is, strangely, forgotten. Though thousands of warheads still lurk in America and Russia, enough to destroy life on Earth a hundred times over... 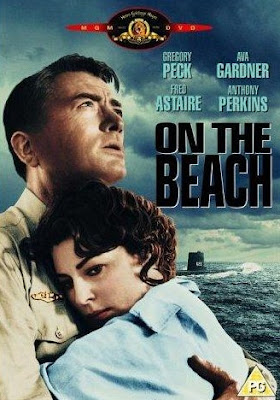 I rented the UK DVD release of On The Beach from LoveFilm. It's presented in black & white, 2.35 widescreen from good-looking film elements. But I believe this has yet to be re-released anywhere anamorphically.


(Written, while listening to Philip Glass' soundtrack to 'The Fog of War' and thinking of Jack, who's just left us.)