An online scrapbook, from the pages of defunct British movie magazines published in 1971... 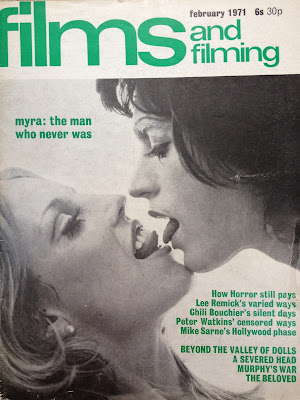 In this issue, Films and Filming interviewed director Mike Sarne about his adventure in Hollywood with Myra Breckinridge, where he talked about his initial plan to cast a male actor to play both Myra and Myron (finally played by Raquel Welch and Rex Reed). In the front cover and in the article there are several photos of one of the unused actors.

Note the price of the magazine is in both shillings and in 'new' pence, just like all pricing throughout the UK, just after decimalisation.


Full page ad for Donald Cammell and Nicolas Roeg's Performance, emphasising Mick Jagger over everyone else in the cast, because The Rolling Stones were huge!


Richard Fleischer directed Compulsion (1959), inspired by the Leopold and Loeb murders and became a natural fit for other true-crime dramatisations like 10 Rillington Place and The Boston Strangler (1968). This full-page advert is more interested in Richard Attenborough playing murderer John Christie than the director. One of John Hurt's many supporting roles before he found fame.

Films about actual crimes are accused of bad taste if they appear too soon to be respectful (for example, The Black Panther was made only three years after the headline-grabbing crimes). Here, twenty years had passed, but this production still attracted criticism for filming on location in the actual 10, Rillington Place before it was demolished.


A couple of double-bills caught my attention in these magazine adverts of 1971 - horror films not being paired with other horror films. Their attraction was surely diluted by offering two completely different genres. Is this a sign that horror movie production was dwindling at the time? I was used to badly-matched double-bills in local cinemas, no doubt determined by what prints were available that week, but to pair up new releases like this seems harmful for business.


I'm glad I found most of Ken Russell's films on late night BBC2, because with posters like this, I wouldn't have bothered. I keep forgetting which one this is, but it's actually another of Russell's classical composer biopics, actually the love life of Tchaikovsky - surely that's a better title?


Now that's what I call a double-bill! The timing of this is so soon after the US premieres, that it looks like they didn't each get solo releases beforehand. Maybe they were twinned because Russ Meyer was unknown to the mainstream and both films had attracted poor (outraged?) reviews.


Another horror classic without a horror B-movie. Amicus famously begged the censor to 'up' the certificate from 'A' to 'X' certificate to make the prospect of The House That Dripped Blood appear more frightening!


Countess Dracula was another horror from Hammer, so why wasn't it teamed with Lust For A Vampire (see January, above). Then Hell's Belles could have teamed up with The Losers. I wasn't old enough to see 'X' films at the time, but if I only wanted to see one of the films on a double-bill, it often put me off going. 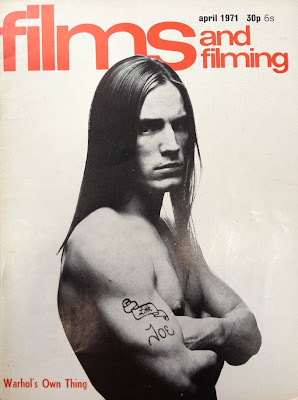 After seeing these magazines and hearing about Andy Warhol's adventures in mainstream movie-making, it was somewhat of a shock to first see them in Scala triple-bills in the late '80s. I guess you had to be there (in the '70s), because I found them quite a trial - technically poor and starring anyone who was a Factory name, rather than actors. My only positive from them was the appearance of Joe Dallesandro. I emphasise his appearance rather than his performance, but he got me through some very long movies.


Another British film for director Richard Fleischer, here filming Blind Terror under the working title Buff (as in 'blind man's buff'). Brian Clemens was a scripting powerhouse, turning out weird wonderful weekly stories for The Avengers then a stream of clever, catch-you-out, murderous thrillers for cinema (And Soon The Darkness) and for TV (Thriller).

This twisty survival chiller transplants the premise of Wait Until Dark (a blind woman in peril) to the English countryside and injects it with energy shots. Mia Farrow was the star of a largely British cast. The film is now circulating on DVD as See No Evil, after it's US retitling which obliterates the original UK title from history, and now confuses it with the recent, unrelated horror film, See No Evil.

My full preview of Blind Terror is here.


The Vampire Lovers gets some explicit publicity here, even though this moment is done tighter and faster in the film's prologue. This moment was also cut when first shown on TV.


Deep End advert relies on a list of review quotes, at odds with its visual style.

Luckily, elsewhere in the same issue, Films and Filming gave Deep End a two-page photo-spread. Co-star John Moulder-Brown is still working now, but at the time lucked into a string of cult films that are also still playing today - La Residencia (1969, aka The House That Screamed), Vampire Circus (1972) and this.


Visual proof of Michael Winner directing Marlon Brando. I wouldn't have believed it otherwise. The Nightcomers is a prequel to 'The Turn of the Screw' (adapted as Brit-classic The Innocents) and stars Stephanie Beacham and Thora Hird. And Brando.


Soldier Blue gets a five-page photo-preview, an indication of Films and Filming championing controversial movies.

A reminder of the original poster campaign for Soldier Blue, which probably damaged the film's fortunes by making it look like soft-porn rather than a socially-conscious Civil War western. Not to mention that the image is so dubiously shocking that recent DVD cover art has had to scrabble together ghastlier alternatives. My preview of Soldier Blue is here. 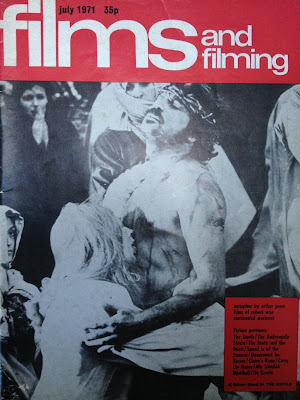 Films and Filming primes the debate on Ken Russell's The Devils with a front cover likely to offend Christians before they even get to any mention of 'naked nuns'.

Inside, a six-page photo-preview fronted by Michael Gothard's groovy exorcist posed before Derek Jarman's gigantic exterior set. While there were anachronisms in the film, these John Lennon steel-rim glasses did apparently exist in the 17th century.


Full page advert with Warner Brothers warning people who might be offended to stay away! This seems more heartfelt than a William Castle pitch. When The Devils hit cinemas across the country, some local councils refused for it to be shown, based on the ensuing controversy.


Meanwhile, subtler horrors were on the way - an early title for The Abominable Dr Phibes appears in print just before its release. The main photo, also used in the poster art, is an example of a publicity photo, rather than a shot of a missing scene. This moment doesn't happen in the film.

Note also, that almost all publicity photos were taken by stills photographers on the sets, rather than any frame blow-ups from the movie's negatives. This explains why they're never quite the same angle as in the film, and often of far better picture quality (usually a 2" x 2" negative, rather than 35mm).

The third of the Planet of the Apes films arrives from the future. These would keep getting re-released together throughout the decade.

I don't remember a poster for Little Big Man, but this doesn't justice to George Roy Hill's epic revisionist western. A similar, parallel premise to Soldier Blue, but by far the more popular.

Richard Burton's character in Villain was a loose portrayal of Ronnie Kray. In the '70s, British gangster movies were finally able to have an edge worthy of the subject matter, with more violence and 'bent' coppers.

This poster demonstrates that there were evil cut-and-paste airbrush monkeys, decades before the present horrors of photoshopped celebrity posters.

M*A*S*H and more Myra Breckinridge from 1970

(These are all magazines that are no longer in print and, to hamper any reproduction for profit, these are all handheld photos rather than scans. M.H.)