A selection from the pages of defunct British movie magazines from 1968... 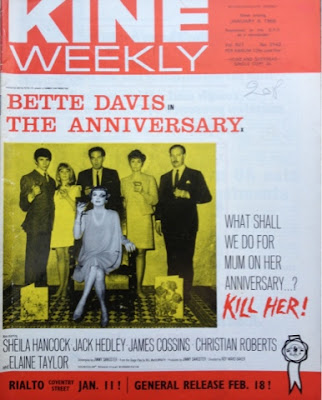 Kino Weekly was a thin, fact-packed glossy trade weekly for cinema owners, enthusing over the latest movies on offer and getting them excited about what's in production. There's news of which studio or overseas location filming is happening. Sometimes films are mentioned under working titles. There are tactful guides to what's making money, premiere photos and publicity gimmicks - all great for research... This issue has Hammer Film's black comedy The Anniversary touted on the cover.

This photo from the filming of Witchfinder General appeared six months before the film was released in the UK.

An insight from Vincent Price into how he played Matthew Hopkins in Witchfinder General. Again, advanced publicity for the film. 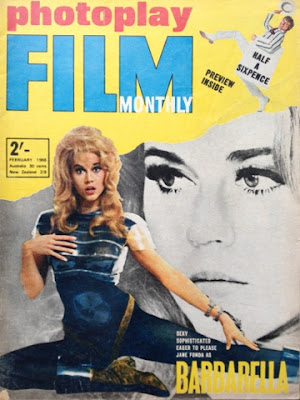 I collect magazines that feature the arrival of the movie Barbarella. So far, the best behind-the-scenes coverage I've seen are in several Playboy magazines from that year. There aren't many publicity photographs of Jane Fonda looking like a cooky sex bunny, but Photoplay found one for their cover.

﻿﻿
Centrespread photographs of young women in 1960s editions of Photoplay Film Monthly were usually of the less well known and less dressed. This double-page of Jane Fonda is fairly restrained, but also deceptively cheeky, with it's supposedly transparent plastic 'windows'.

The third Harry Palmer film was also Ken Russell's first big-budget feature film. Here, the producer gets a bigger credit than Ken because of his Bond films. My review of Billion Dollar Brain is here.

July 1968, a year before Britain got The Wild Bunch, Tigon films made 'the year's most violent film'. This half-page ad crowds out the poster art with quotes from the newspapers. No bad thing, because it's not a great likeness of Vincent Price. Wilfrid Brambell gets a huge billing for appearing in just one shot! My review of Witchfinder General is here.

Behind the scenes shot - filming the opening scene of The Monkees' movie Head. Interesting to see how compact the underwater camera is.

Heist thriller with an even subtler gay subplot (tastefully referred to here as 'perverse'), which again bizarrely boosts this up to an 'X' certificate. Beautiful John Barry score and a tense jewel robbery, this may be too slow-paced for today.
﻿
Intense splash page for Twisted Nerve. This psycho-thriller reteamed Hayley Mills and Hywel Bennett. The Bernard Herrmann score has helped the longevity of this minor horror movie - the whistling theme reappearing in Kill Bill: Vol 1. My review of Twisted Nerve is here. This gets two rare 35mm screenings at the BFI SouthBank on September 17th and 21st - details here.