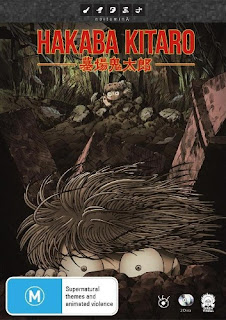 So far, my favourite Miyazaki film is Spirited Away, but for English-speaking countries, any other yokai ghost stories have been thin on the ground. Shigeru Mizuki's GeGeGe No Kitaro manga have provided an almost endless stream of ancient Japanese ghost stories updated to modern times, and depite being aimed at children, are still creepy enough to entrance me without any translations.

So far, the only appearance in the US or UK of the many incarnations of this character has been the DVDs of two recent live-action movies. The stories are more faithfully represented in manga and anime and, despite being nearly fifty years old in Japan, are only just being translated into English. 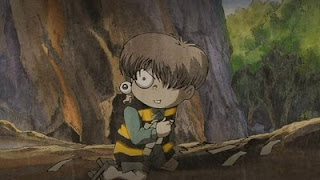 Hakaba Kitaro is a short series aimed at older viewers, and a good starting point for anyone new to the character, as it's the story of Kitaro's origin, in the grislier visual style that he was first drawn in. This 2008 series has just been released on DVD in Australia, before any other Kitaro anime has appeared in the US or UK. 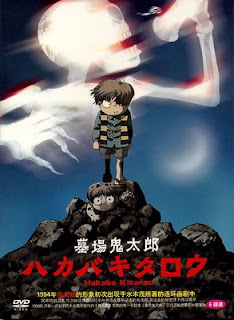 Hakaba Kitaro (Graveyard Kitaro) is a series that I'd recommend. It's bizarre, funny and ghoulish, as well as providing a valuable understanding of a large part of Japanese pop culture. It's been released as a 2-disc DVD boxset - Australia is region 4, PAL system.

Here's the full news story from Twitch with more screengrabs from Hakaba Kitaro.

My preview of Hakaba Kitaro from 2008. 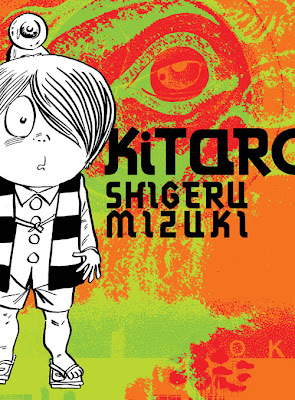 Happily, the first extensive English translation of Mizuki's original manga also arrives this month. A generous selection of classic Kitaro stories have just been published by Drawn & Quarterly. Recommended for any fan of Japanese ghost stories. Here's one of the stories, previewed on CBR. 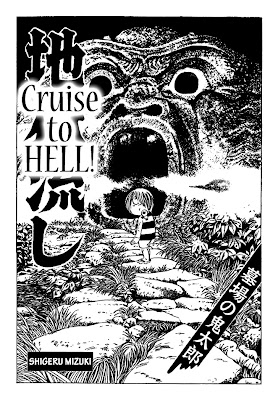 'Kitaro' follows two other recently translated volumes of Mizuki's work, 'Onward Towards Our Noble Deaths' - about Japan during WW2 and Mizuki's own trials in the South Pacific, and 'Nonnonba' - a wonderful account of his childhood and the adopted 'grandmother' who first introduced him to the ancient ghost stories of Japan.

The Black Hole guide to all of Kitaro's other anime series and films.

Email ThisBlogThis!Share to TwitterShare to FacebookShare to Pinterest
Labels: anime