A selection from the pages of defunct British movie magazines from 1969...
This strikes me as a weird, mind-boggling double-bill. But in 1969, would have been a fun afternoon for the kids. But many mums and dads might not have been Toho Studio kaiju fans. Presumably distributors were inviting audiences to just laugh at Japanese monster movies...


While the screens were quickly filling up with sex, violence and counter-culture, I was only eight, and actually found Chitty Chitty Bang Bang to be (fairly) exciting that year. It was fun to see Benny Hill on the big screen and, the Sherman Brothers' songs and Robert Helpmann's performance as the Child-Catcher have certainly haunted me ever since. The children's story was written by Ian Fleming, and produced by the same production team behind the big James Bond movies. Hence, the lavish budget and the wonderful Ken Adam sets (like the slopey-walled dungeon).


After Repulsion, Roman Polanski made another horror film set in the heart of a modern day city - this time in a Manhattan apartment block. For the time, this horror film was about as far from Edgar Allen Poe and Hammer Film gothic as you could get. Polanski had indeed just spoofed the Hammer film style with his rather odd Dance of the Vampires (aka The Fearless Vampire Killers).. 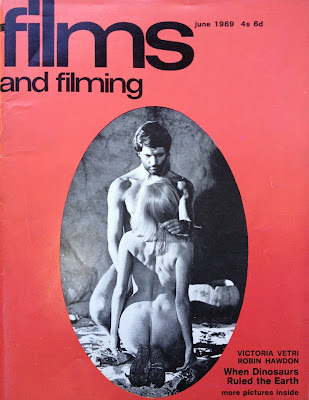 To be fair, Hammer were trying to reinvent themselves. As in, add more nudity. Not just to their vampire films, but to this follow-up to One Million Years B.C.. Despite the carnage and the cleavage, the film still only rated an 'A' certificate (kids allowed in with an adult). So, for an eight year-old, topless cavewomen and rough sex were a bit of a surprise. This would have been the film where I asked, "Mummy, what are they doing?"

The same month, Hammer Films announced a raft of their forthcoming films. But several of the titles listed here never got made. Note that they planned another Dennis Wheatley adaption (The Haunting of Toby Jugg), that would have added to The Devil Rides Out and To The Devil A Daughter. I've seen the poster for When The World Cracked Open, but I'm not sure what The Claw and In The Sun would have been.

My parents didn't take me to many kiddie films, and I also saw this in 1969. The Most Dangerous Man In The World is now called by the US title The Chairman and on DVD under that name. I t features Gregory Peck and a young Zienia Merton getting tangled up in an assassination attempt on Chairman Mao! My full review here.


This double-bill I also saw, but really included it here because of the supporting feature. Disney made a string of adventure films for children at this time, filmed and released in Britain and cut up to make several episodes of Walt Disney's Wonderful World of Color for American TV. Note that a teenaged Kurt Russell was already getting top billing. Diamonds on Wheels was another similar project.

Here's one I didn't see that year, and not for many years - until ITV first showed it as an extremely censored version. At the time, there was a furore about the amount of violence shown. I don't doubt that the Daily Mail was appalled. The film magazines were running defensive articles about increasingly violent movies (Bonnie and Clyde was another offender), while emphasising to their potential patrons just how sexy and violent certain films were. 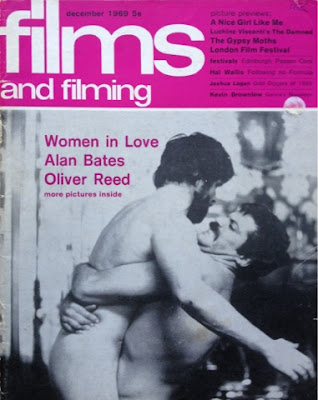 More controversy - perhaps even more infamous than The Wild Bunch. Ken Russell's Women in Love was a very revealing benchmark of public prudity, which erupted over the scene where Alan Bates and Oliver Reed wrestled nude by an open fireplace. Not only did it break the taboo of full frontal male nudity, but their sweaty grappling was too much like gay sex for many reviewers to handle. A stark contrast to the reaction to female nudity onscreen, which had been more warmly welcomed by the establishment, although similarly carefully censored.


Note also, that this first played at The Prince Charles Cinema, just off Leicester Square. It's still rolling today, but with daily repertory screenings.