An online scrapbook selected from the pages of defunct British movie magazines...


Another 'X' film, which now seems very harsh. Like Midnight Cowboy, the adult certification wasn't because of violence or graphic sex but, I'm guessing, for the brief nudity, drug use, and sex outside of marriage? This is what I'd call a mainstream 'X' certificate, gently breaking in audiences to the full excesses of the 'new permissiveness'. The full limits of the 'X' certificate would be fully tested over the next few years.


﻿ A perky publicity shot of Maggie Smith when she starred in The Prime of Miss Jean Brodie. I just wanted it remembered that she hasn't always looked like she does in Harry Potter and Downton Abbey. Maggie won one of her Oscars for this performance, starring opposite her then husband Robert Stephens. Pamela Franklin (the medium in The Legend of Hell House) plays the most vocal of her young students.


Here's a more 'X' worthy movie, that was about to arrive in the UK. Myra Breckinridge still had no nudity, maybe some swearing and a lot of implied outrageousness that you'd probably have to read the book to realise what was going on. The publicity photo gives away more than the scene in the film.

Rex Reed plays Myron who quickly transforms (surgically) into Myra (Raquel Welch), but this isn't a serious look at transitional gender, but rather a satirical revenge comedy drenched in Hollywood back-references. Based on the novel by Gore Vidal, Myra represents a radical assault on the male domination of the world. With musical numbers.


I've not seen Goodbye Gemini yet, but it looks interesting and has been remastered and released in the BFI﻿﻿﻿﻿﻿﻿﻿ 'Flipside' series. Similarly, Girly has only recently resurfaced after a long absence, with an American DVD release. At his last Q&A at the BFI, director Freddie Francis picked this black comedy as his favourite film that he'd directed. Despite the publicity campaign relying on yet another sexy schoolgirl, the character of Girly is part of a seemingly dysfunctional family getting by in it's own unique and violent way. The full title, used in the UK, was Mumsy, Nanny, Sonny & Girly.


I found this advert for Toomorrow shortly after reading about it in Julian Upton's 'Offbeat' (pictured below) and would otherwise have skipped right past. What this advert fails to mention is that one of the young stars is Olivia Newton-John, who also sings several of the songs. Of course she was unknown at the time, and producer Don Kirschner was trying to start up a new version of The Monkees, with another ready-made band again being expected to act in wacky adventures. Olivia, only 21 at the time, is the standout star of the band and a relaxed onscreen presence in Toomorrow, well-prepared after her early TV work in Australia. It's a wacky sci-fi story with Roy Dotrice as a skin-peeling alien in a rather spectacular spaceship. But just as interesting is the nostalgic location work around London - including The Roundhouse in Camden. 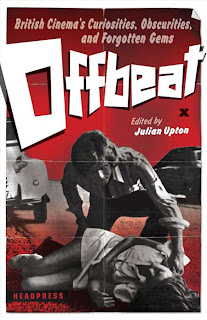 A number of hitherto obscure movies like this are, surprisingly, already available on DVD - Toomorrow is a slightly fuzzy transfer, but watchable enough and available cheaply. The 2.35 widescreen, the modelwork and the psychedelic sets even makes me curious what a blu-ray could look like... The songs are even growing on me, it's not Grease but the vinyl soundtrack is still selling for silly prices.
As 1970 wears on, the UK was still catching up on American releases that we now refer to as '1969', because that's what IMDB says it is. They Shoot Horses, Don't They? shocked me as a teenager when I saw it on TV, on learning that couples actually entered marathon dances (to dance until they dropped from exhaustion - for a chance to win a cash prize) during the depression following the Wall Street crash in 1929.

Only when I read Tod Browning's biography ('Dark Carnival' by David Skal), did I realise that Horace McCoy's novel was written back in 1935, and that Browning had actually bought the rights to it, intending to film it himself. Browning lived near Venice Beach at the time and had attended some of the 'marathon dances' on the pier, which was eventually used as a filming location in Sydney Pollack's impressive, Oscar-winning film. 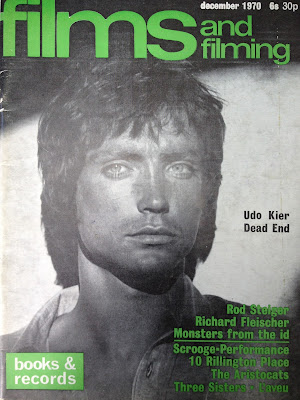 Here's Udo Kier looking like a sexpot, rather than the creepy eccentric of Blood For Dracula, Flesh for Frankenstein and Suspiria. The covers of Films and Filming more often featured sexy male actors than female, aiming to keep gay male readers entertained (an almost complete reversal of the current lads' mags controversy). Gay magazines and newspapers weren't sold at the time by 'respectable' newsagents, for that matter male homosexuality had only been decriminalized in the UK in 1967.

﻿﻿ These snippets of news intrigued me - did Spike Milligan actually shoot scenes for Ken Russell's The Devils? Boris Sagal's The Omega Man was nearly the first version of Richard Matheson﻿'s novel 'I Am Legend' to use that title. And Escape From The Planet Of The Apes nearly had a different title! Yup, I love trivia like this...


(These flashbacks are for reference and for fun's sake. I'm certainly not going to scan in any entire articles - instead, there are enough details of which magazine they're from - most are easily available on eBay. Some of the full-page ads, and of course the covers, are also worthy of framing! These are magazines that are no longer in print and, to hamper any reproduction for profit, these are all handheld photos rather than scans. M.H.)