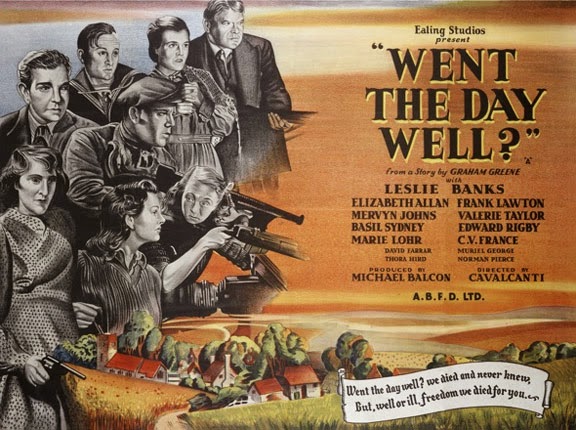 An English village surrounded by countryside. The middle of World War II. A regiment of German troops secretly parachute down, pretending to be British troops. With inside help, they infiltrate the village on a strategic mission to make way for the German invasion. All that can stop them are the local women, old men and children...

The women who run the switchboard at the local post office become crucial. As does anyone with a car, a gun or even a bicycle. Anyone with the means to warn the outside world or the local Home Guard. 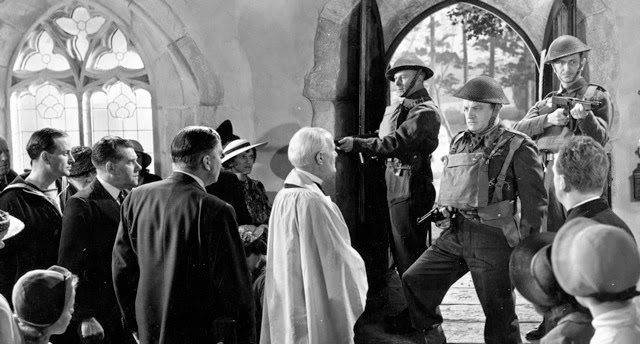 Went the Day Well? isn't like the many British war films or spy thrillers of the time. The heroes aren't the best of the armed forces or dashing secret agents. This isn't armed combat and fistfights. There are no battlefields or rooftop chases. It's not an epic, it's not a comedy. While it has lighter moments, this is the horror of invasion, rather like the Village of the Damned and just as violent.

My first glimpse was of the most shocking the scene, on afternoon TV. I couldn't believe they'd show something that violent during the day. Of course, the rules were different during schooltime, when children weren't supposed to be at home. A modern, colour film wouldn't get away with that level of violence. 'An old black and white war film' is presumed to be harmless. But also the cosy setting of the rural home counties made most of the film seem, at a glance, idyllic. A sixty year-old film achieving shock value instantly impressed me, and I watched out for it to be repeated. 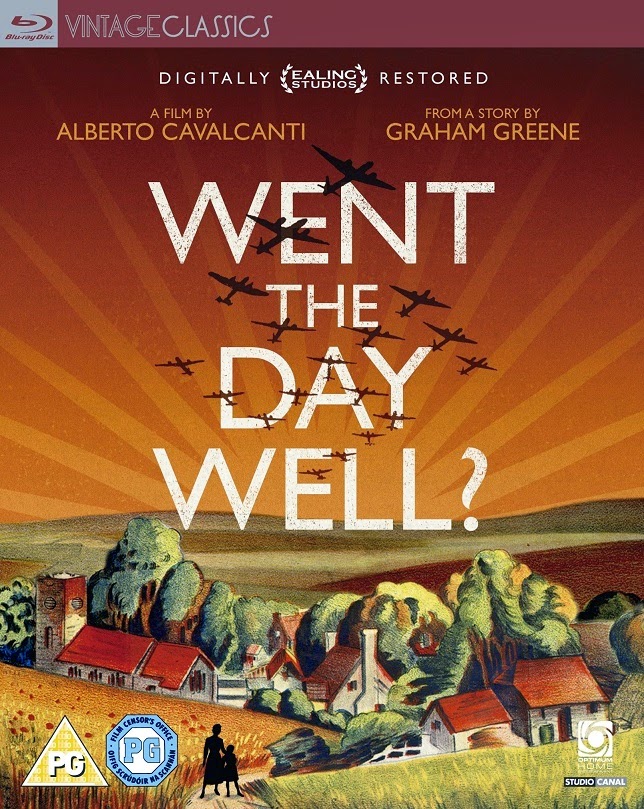 Now, to replace the cramped TV screenings (credits and captions used to be cut off at the edges), there's a blu-ray release in 1.66, presumably an early use of that aspect ratio. Besides the shocks, the continuing pleasures are in the cast, the photography and the uneasy sense of 'what if?'. What would have happened if Germany had invaded the British mainland, a country sapped of fighting fit young men. 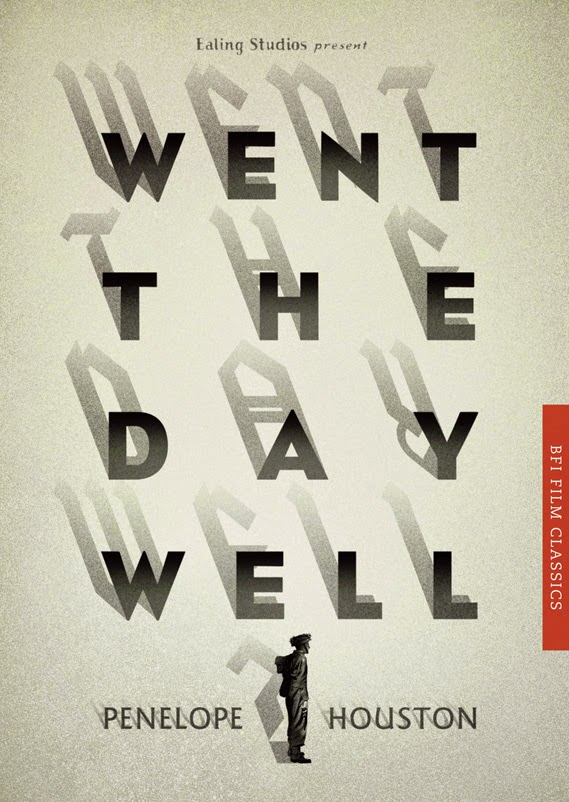 The BFI Classics book by Penelope Houston starts with several rude swipes at Went The Day Well? being a minor film, not having "any striking depth or subtlety" and with "few puzzles of interpretation". What's wrong with a good story that dares to show us a possible yet unthinkable future?

Thankfully she goes on to explore its role as propaganda, one of the only films to visualise a German invasion of Britain that was made during the war. Indeed, in early 1942 invasion was still a real possibility and this would have been the perfect vehicle to demonstrate to a wide audience what ordinary people could do. Though apparently the government weren't nearly as interested in propaganda as Germany. Indeed, the British film industry had had to scale down production enormously, starved of funds, staff and resources. They certainly weren't being used to boost morale or speak for the government. 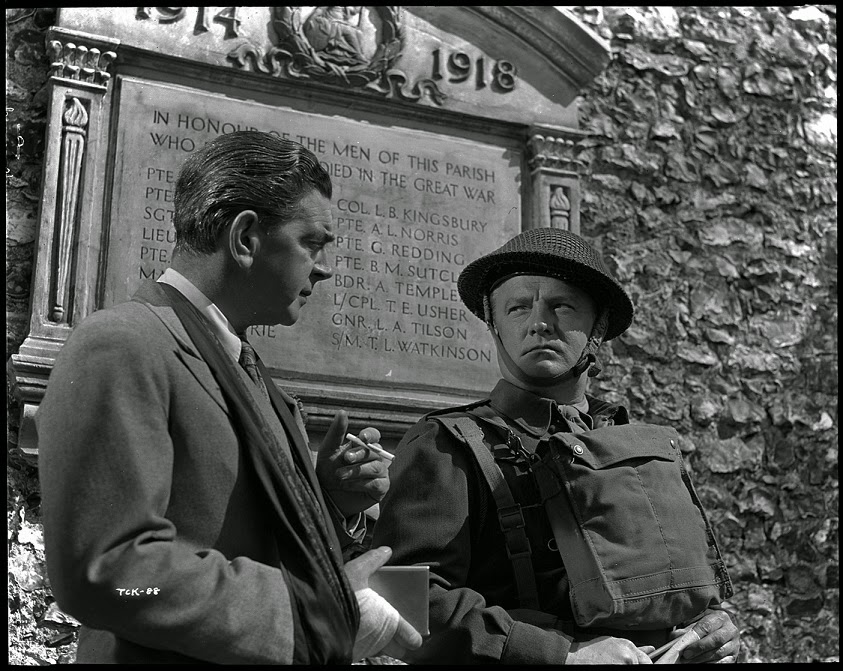 Apparently the story caught the eye of Michael Balcon at Ealing Studios, as well as the Brazilian documentary director Cavalcanti who was friends with Graham Greene, who had written it for a magazine. I think it was basically Balcon, the director and their writers who wanted to answer the difficult questions - what could people do if they came face to face with invaders in their own homes. It suggests a moral stance of selflessness, with scenarios that empower the young and old to make a difference.

An ambitious story, some of the action falls flat because of a lack of stunt performers, soldiers are playing soldiers and simply fall down rather than act at 'being shot'. This lessens some of the drama, but the director also avoids dwelling on all the sacrifices made. Some of the cast complained that he didn't direct them much and this showcases performers who could 'direct themselves'. A particular standout scene is from a young Patricia Hayes (The NeverEnding Story, A Fish Called Wanda). 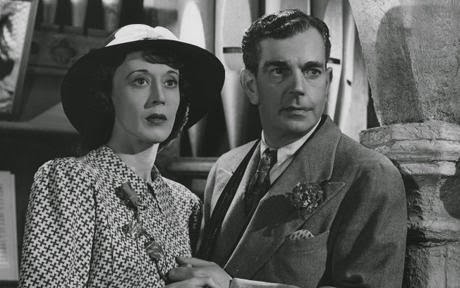 Leslie Banks will always be Count Zaroff in The Most Dangerous Game, but here he's the traitorous town squire. The camera kindly makes little of the facial disfigurement on his left side (from an injury in World War I) though his character is still two-faced. Further down the cast, Thora Hird (below left) became a familiar face in British TV, here uncharacteristically handling a rifle with glee. 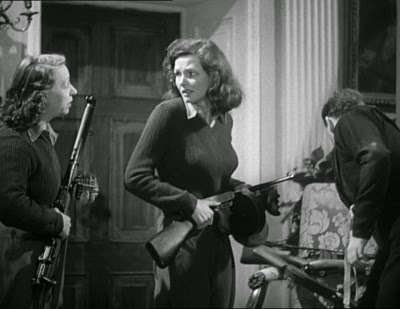 Elizabeth Allan (above centre) is more familiar in flowing dresses in Mark of the Vampire. The accomplished cast make the large number of characters are easy to distinguish. I failed to spot James Donald in the background, or a young Janette Scott (Thora Hird's daughter) as one of the children.

Little is made of the impeccable English accents of the German soldiers, and they don't revert to speaking German when found out. Their true allegiance isn't concreted with dramatically unveiled swastikas or flags. We don't even see them parachute in. The overall impression is that they could be rebel British soldiers. But that's another message from the film. You have to be careful and not go by appearances. 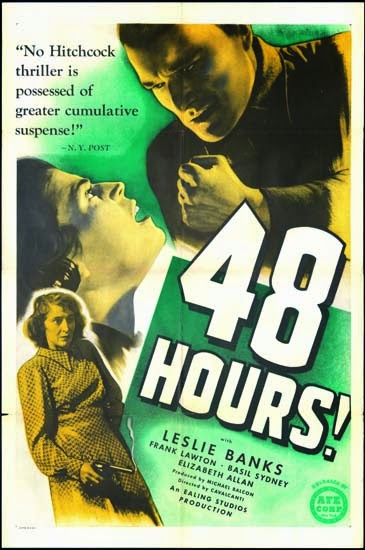 In the US, it was simply retitled 48 Hours. Director Cavalcanti of course went on to direct a segment from the acclaimed portmanteau horror Dead of Night (1945) that also features Mervyn Johns in a pivotal role.

An unusual nightmare from an unusual moment in history. 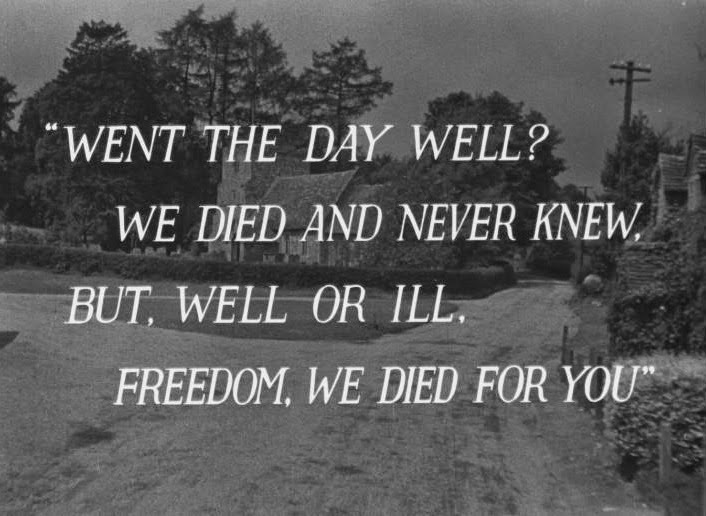