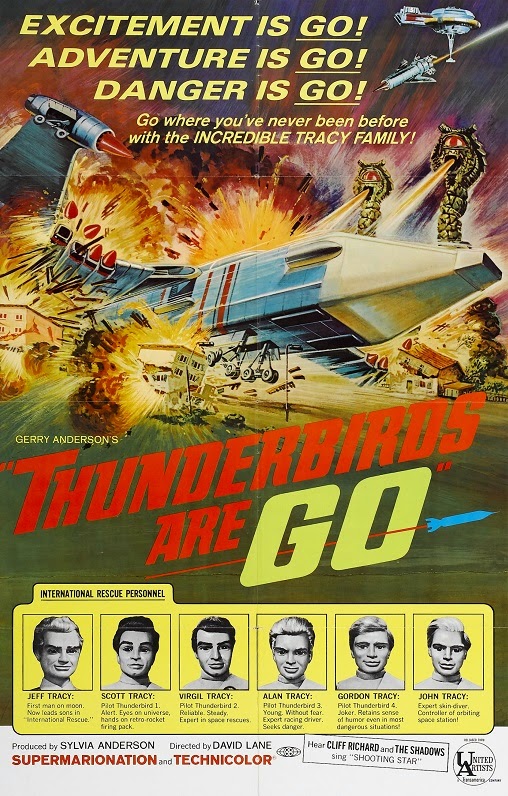 Both on one limited edition blu-ray from Twilight Time

Gerry Anderson's many series have been a lifelong obsession of mine. But of all the times I've seen Thunderbirds Are Go, watching this blu-ray was one of the most thrilling. I could talk about this all day but I'll try and be brief...

The first mission to Mars is under threat from sabotage. International Rescue are called in to ensure the safety of the astronauts lift-off for Mars and their return journey too! Most of the Thunderbirds craft are needed and of course Lady Penelope is called in to tackle the villains, demonstrating a spectacular new feature of her fabulous Fab 1 Rolls Royce. 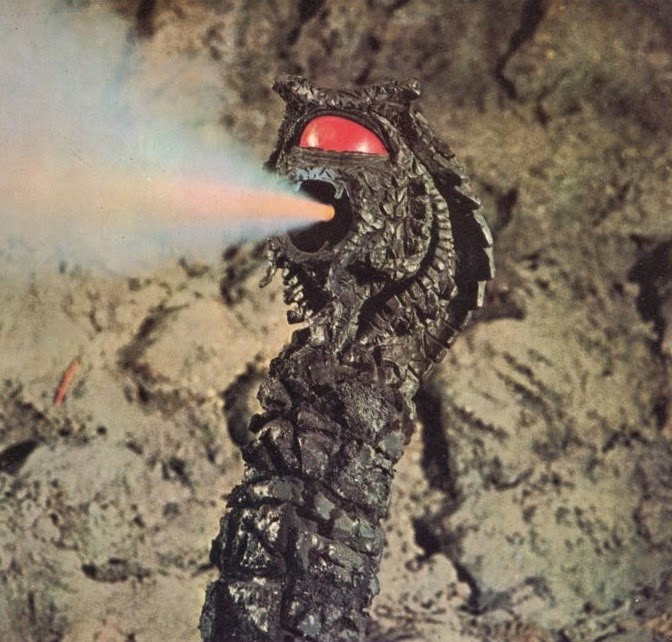 Gerry Anderson's Thunderbirds TV series first aired in the UK in 1965 and really spoiled us as children. A puppet show with intricate models (that looked like the best toys ever), a weekly hour of special effects and explosions. Every set for the puppets had to be built and dressed in 1/6th scale. All the exteriors, every vehicle and aircraft and their surroundings, had to be built on an even smaller scale. As a child, it was a hugely exciting adventure. As an adult, the work that went into these illusions still fascinates, as does the high quality of the writing and the humour and inventiveness of the stories.

Thunderbirds was a huge phenomenon in sixties' Britain, so popular that it immediately spun off weekly comics, books, toys, model kits, records and more - a marketing phenomenon over a decade before Star Wars. As most televisions were still small, squarish screens in black-and white, Thunderbirds then burst into cinemas in two widescreen adventures in colour. The puppets and models were all upgraded for their big screen appearance. Similar to when TV productions had to revamp their sets and make-up for the transition to HD transmission. None of the footage from the Thunderbirds TV shows was re-used - for instance, all the classic launch sequences of the Thunderbird craft had to be rebuilt and re-filmed.

Of course, Barry Gray (who provided the theme tunes and backing music for all of Gerry's shows from The Adventures of Twizzle to the first season of Space: 1999) composed and conducted the movie soundtracks, this time with a big orchestra. 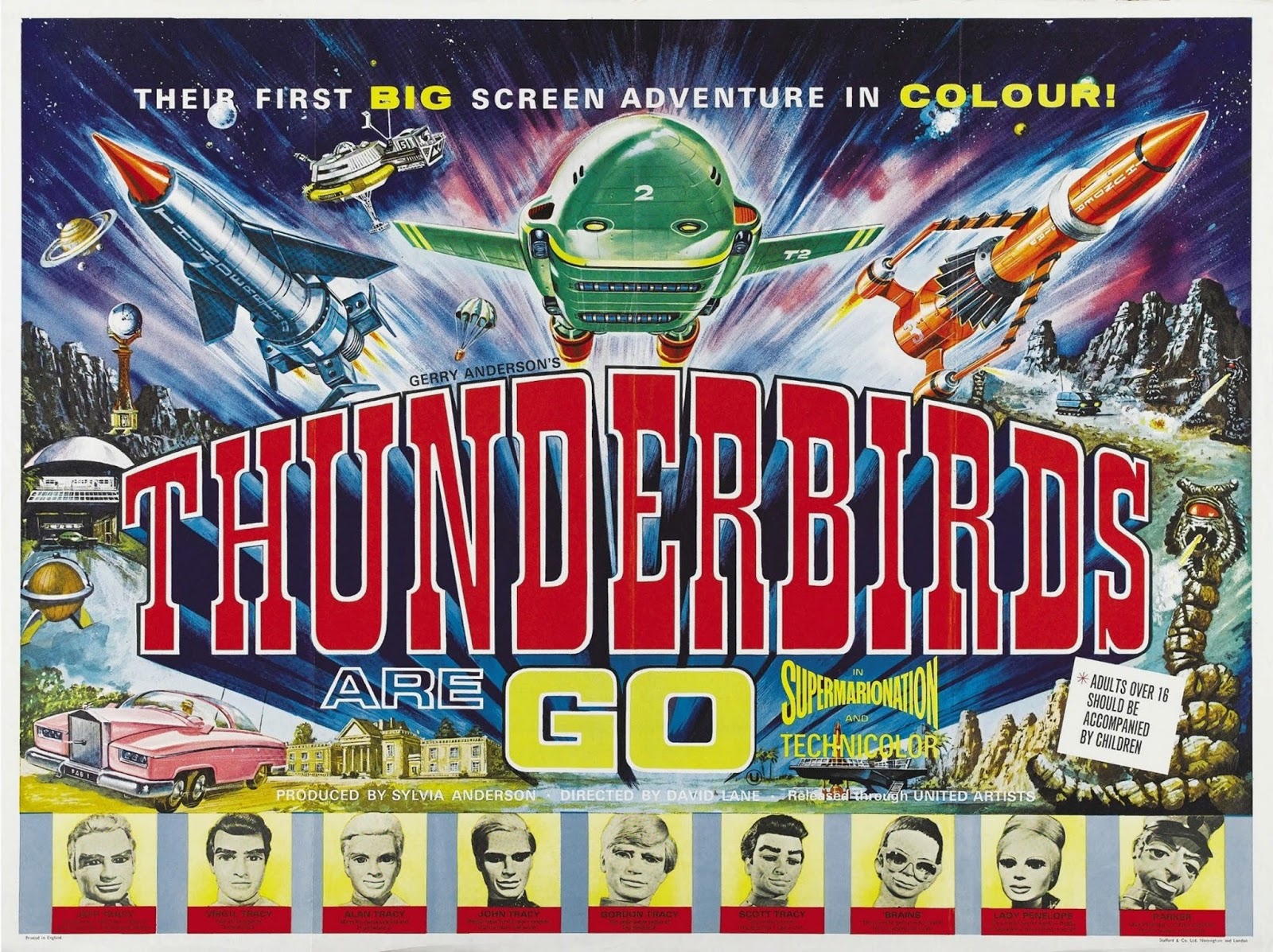 While the two feature films weren't successful at the box office, I had no idea about that as a child. I'd got to see Thunderbirds in colour on a huge screen! The TV series then finished after 32 episodes, but continued to be repeated for many years on ITV. Eventually, there was home video, and then there was a second boom in popularity during the BBC2 repeats in the 1990s. 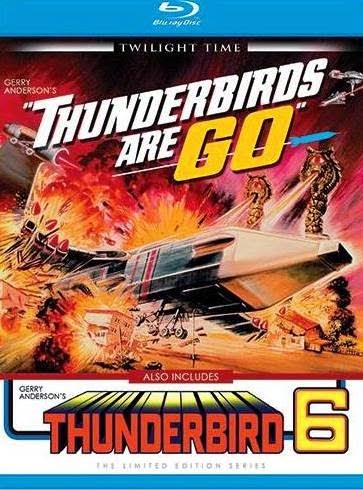 I always double-dipped for the home video releases, through VHS, laserdisc, and DVD. But I think the new blu-ray release from Twilight Time, with both feature films on one disc, is the best presentation we're likely to see in terms of picture quality. Though I've read a few complaints about it...

Both films were shot on 35mm, but for some reason, in Techniscope - a lower budget alternative to anamorphic 2.35, where the widescreen image is squeezed onto four perfs of 35mm film. Techniscope was non-anamorphic, recording the 2.35 image onto two-perfs of 35mm. The result being that the features were filmed at half the visual quality of the TV series!

As a result, any shots that involve 'optical' work, like when the opening titles are added over a moving image, the quality of the image has gone down a generation when the two elements were optically combined and copied onto a new negative - this makes it noticeably more grainy, which is unfortunately how Thunderbirds Are Go begins. After all the Thunderbird craft are introduced, and the assembly of the Zero-X (over which the opening titles appear), the picture quality improves greatly. But the visible grain might be a shock at the start of this blu-ray. It's not how the whole film looks, it's just during the title sequence, which is admittedly very lengthy.

Blu-rays use high-resolution digital scans of film elements, allowing us to see the quality of the original film even clearly than it was possible in the cinema. The puppet scenes look the best, with less grain and saturated colour. The exteriors, with models of spaceships and aircraft are grainier. I've also noticed this difference while watching the UFO blu-rays, where the actors' scenes have a different look than the miniature work. I'm guessing that they used different cameras, maybe even different film stock. The miniatures were usually shot at higher speeds, resulting in a slow motion to make the models appear to look heavy. But this increase in filming speed, and the need for very deep sharp focus so as not to give away the small scale, would demand much more light and wider lens apertures. Basically pushing the film stock it to its limit. The main problem would be more grain.

But I like the fact that I'm watching something that looks like film. After many years, I'm very used to seeing grain. I also know that it's not always welcome when watching a brand new film on blu-ray! But this isn't brand new and it wasn't shot digitally. I'll add that I'm against use of heavy digital grain reduction to amend this texture. It could add extra textural movement that wasn't on the negative and possibly obscure valuable visual detail. On this presentation, it's daunting to finally see (feint) support wires on the Zero-X spaceship. Derek Meddings and his visual effects crew would certainly have reshot those scenes if the wires were visible on a cinema screen. Proof that we're seeing the film at higher quality than ever before. 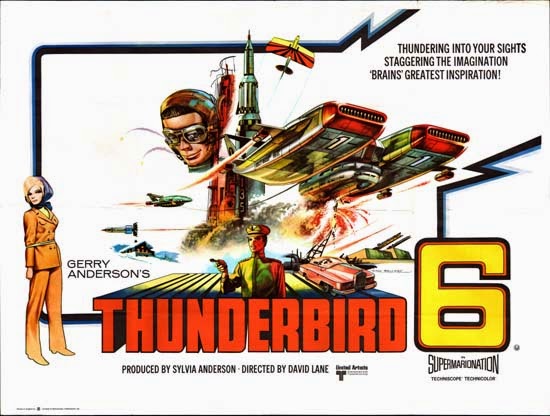 Twilight Time have included previously available DVD extras and added some new ones. Having both films on one disc makes this the best value of all their releases. The new transfers also improve on previous DVD editions with a less cramped aspect, revealing additional picture information on all sides of the frame. For the level of detail and richness of the colours, I couldn't be happier with it!

There are several high definition screengrabs from both films on this blu-ray here on DVD Beaver. 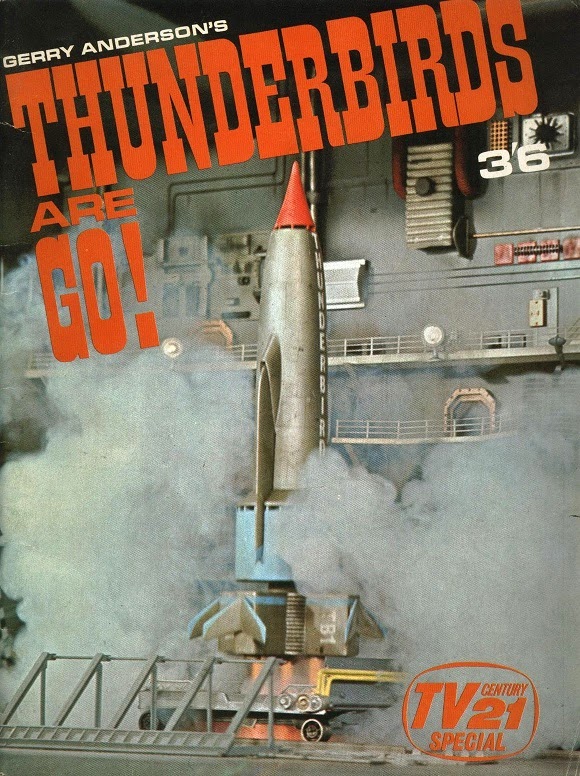 A special 1965 magazine about the story and the making of the film.