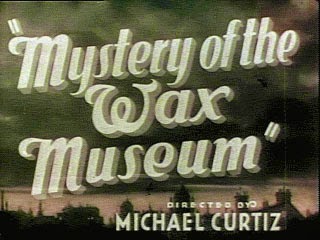 I love Wax Museum because the humour is modern, the colour scheme almost unique and that it can still chill and shock despite being over 80 years old. It bridges the gothic (or German expressionistic) look of early Universal horror with a modern metropolitan setting - eradicating the safety net that horror only happens in far away countries or the distant past. 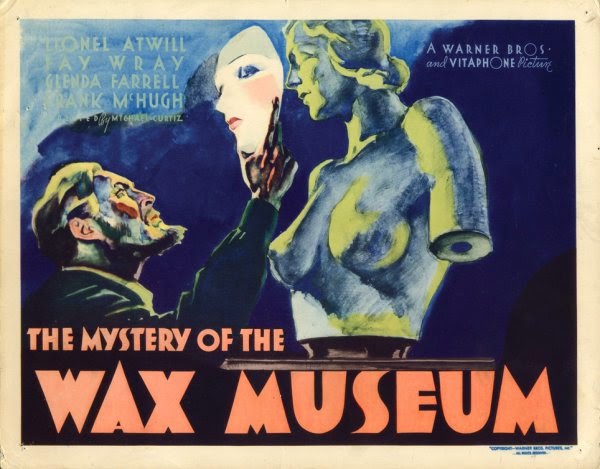 With a twisty plot, racy dialogue (Glenda asks a policeman, "How's your sex life!"), distorted, creepy sets (from production designer Anton Grot), dynamic camerawork, this is a super example of an early ‘talkie’ - the colour helps you forget just how early this is. The problems of unwieldy cameras and the hiding of microphones (spoofed in Singin' In The Rain) have all been surmounted only five years after the first talkie, The Jazz Singer.

Lionel Atwill ruled many movies as a black-hearted villain, but here balances his character with sympathy for the pain of his being crippled in a fire, no longer able to walk or sculpt - his hands burnt so badly that they're no longer useful. 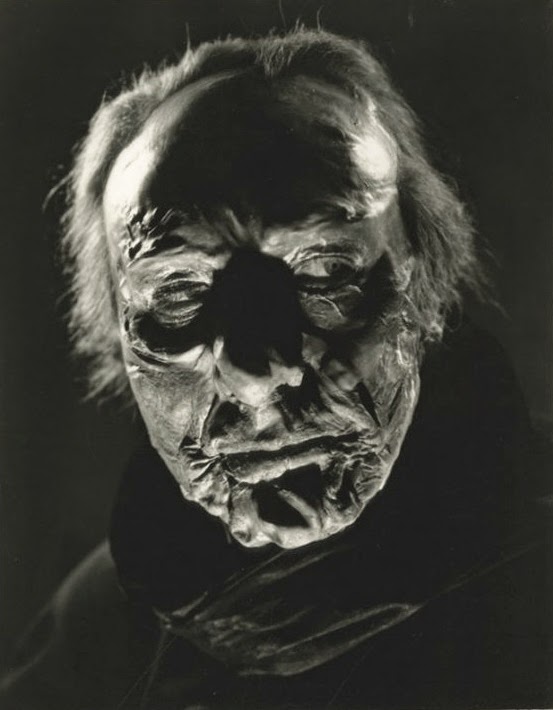 Wax Museum is a classic of 'pre-code' Hollywood, made before the Hayes Code censorship kicked in, that toned down Hollywood for several decades with a huge list of 'don'ts'. Glenda's character starts off nursing a New Year's hangover, a police friend is flaunting a ‘naughty’ magazine and one of the villains is explicitly a cocaine addict, as well as such irreverent immoralities as alcohol during prohibition and marrying for money. Mercy! 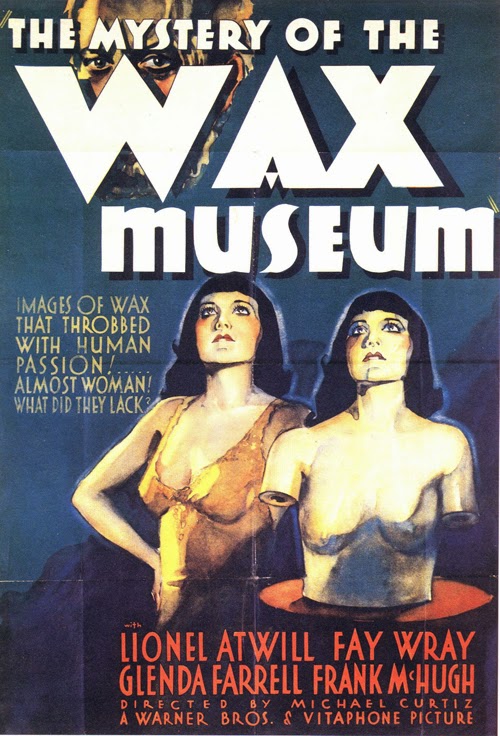 Briefly, films talked about sex and drugs, and horror was that much more horrifying. Allowed to be sadistic, shocking and sexual. So too was the advertising, posters and publicity photos used nudity - substituting naked statues for actual women (see above and below). 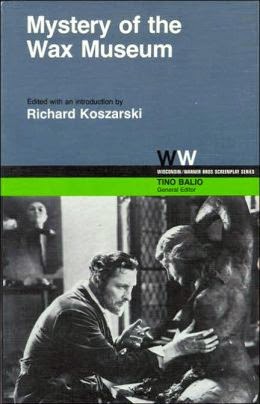 After years of officially being a lost horror film, a single print of Wax Museum was discovered. We're therefore at the mercy of any damage that this only print has ever endured. Any scenes where a few frames are missing also means that snippets of dialogue are also lost. I rewatched the film, comparing it to the scriptbook (above) to discover that, while it reprints the final script, much of the dialogue was then altered during the shoot. No major changes, but perhaps of interest to how director Michael Curtiz improvised or improved dialogue on the day. This book also has an extended look at the origination of the script that inspired so many similar projects and two direct remakes. 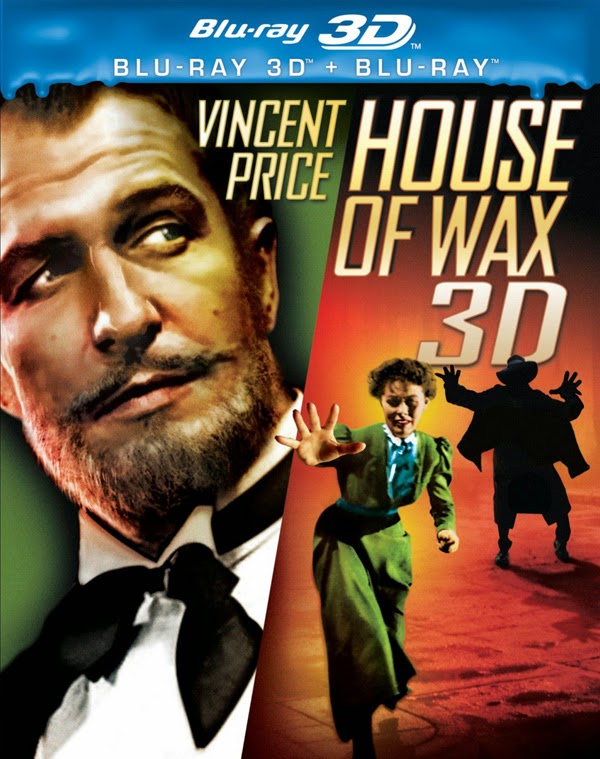 Mystery of the Wax Museum isn't available on its own DVD, but is included on the 1954 House of Wax DVD and blu-ray, as an extra! Unfortunately it's not included in high definition.

Wax Museum was filmed in an experimental colour technique, two-strip Technicolor, where only red and green elements of the colour spectrum could be recorded. It needed twice as much film, but red and green were chosen because they could accurately capture Caucasian flesh tones.

The bad news is, that on the DVD and blu-ray releases, this rare colour process has been electronically tweaked to artificially include blue, as well as the original red and green, resulting in a surreal, over-saturated effect. The original delicate flesh tones are now a surreal, ruddy red.

On DVD, blue has been added (left) to scenes
that should only be red and green (right)

Some sets and costumes are now royal blue, a colour that wouldn't have been seen in the cinema. This technique fails to make the film resemble a normal colour film, and deprives us of seeing how 'two-strip' looked. The only official release to use the original elements was the laserdisc release, of both Doctor X and Wax Museum, both filmed in two-strip. Mystery of the Wax Museum was originally written as a follow-up to Doctor X, making this a very suitable pairing, both starring Lionel Atwill and Fay Wray. 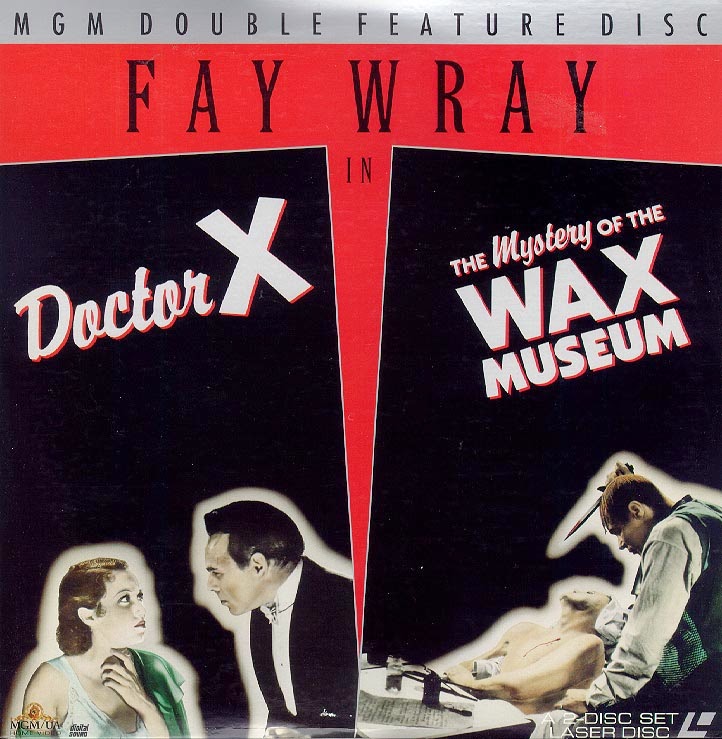 By the way, the two-strip release of Doctor X has been on DVD a couple of times, though the alternate black-and-white version (that uses different camera angles and alternately filmed takes) hasn't hit home video yet. 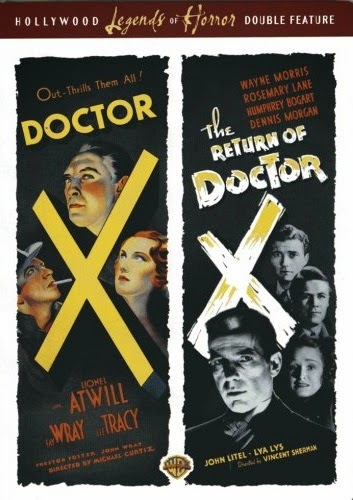 (This is my updated look at the film and its availability. Nine years ago, this article looked like this...)