FRANKENSTEIN MUST BE DESTROYED (1969) - the doctor driven to new depths 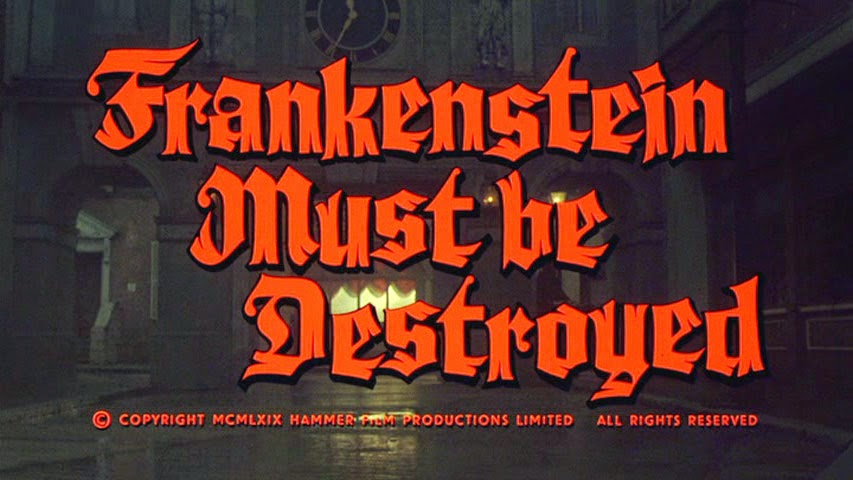 FRANKENSTEIN MUST BE DESTROYED
(1969, UK)

The apex of the Hammer Studios' Frankenstein series...

Baron Frankenstein's latest experiment has been found discovered by the police. He has to leave town quickly and continue his grisly work elsewhere. With a new name and hidden better than ever, the doctor discovers an old colleague is now confined to an lunatic asylum. Frankenstein uses his unorthodox surgical skills to cure this doctor whose knowledge can further his own...

This Hammer horror stands above the rest of its Frankensteins because, this time, the human experiment can reason intelligently and speak their mind. While teenaged me was disappointed that it wasn't about a rampaging disfigured monster, the dramatic consequences proved creepy and haunting. That Frankenstein never hesitates to further his knowledge at the cost of any lives necessary. 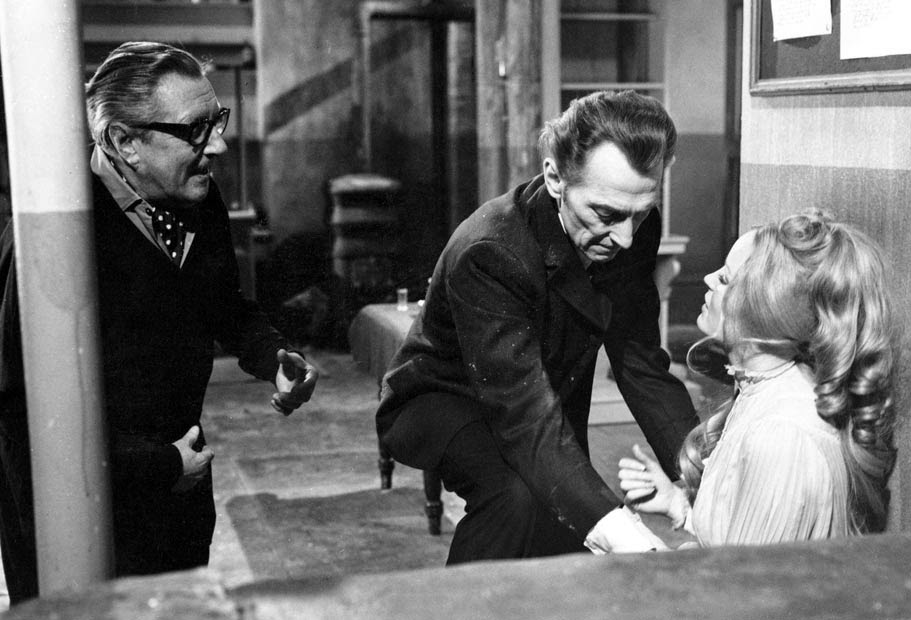 It was The Curse of Frankenstein (1957) that launched Hammer Studios in the new direction of horror for the next twenty years. They continued Baron Frankenstein's medical adventures with Peter Cushing every couple of years for another five sequels. There's no overall 'story arc' - each Dracula, Frankenstein and Mummy film can be enjoyed as stand-alone films. Just as well, back when the only way to see them was when ITV or BBC decided to schedule one, always in a random order. 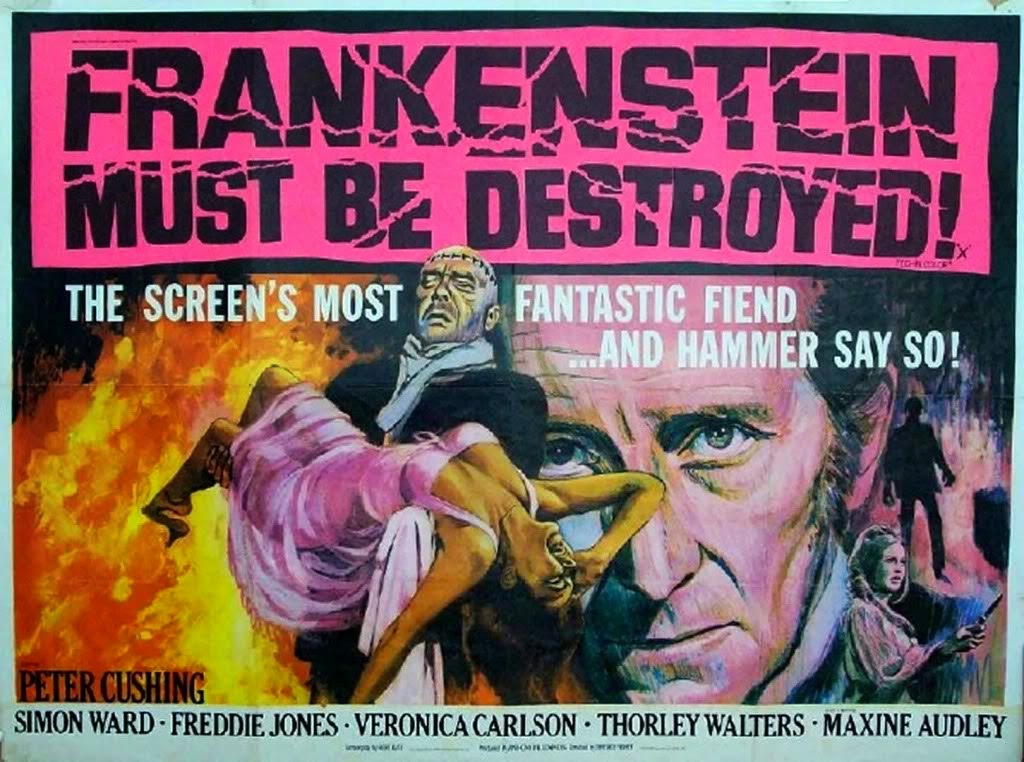 For me, Frankenstein Must Be Destroyed is the most interesting of the Hammer Frankenstein's. It's not set in a castle and there's less emphasis on costume drama. Apart from riding around on a coach and horses, it could even be a modern story. This film also attempts to compete with the emerging violent cinema heralded by Bonnie and Clyde and The Wild Bunch. Not as extreme as either of those, but notably more vicious. 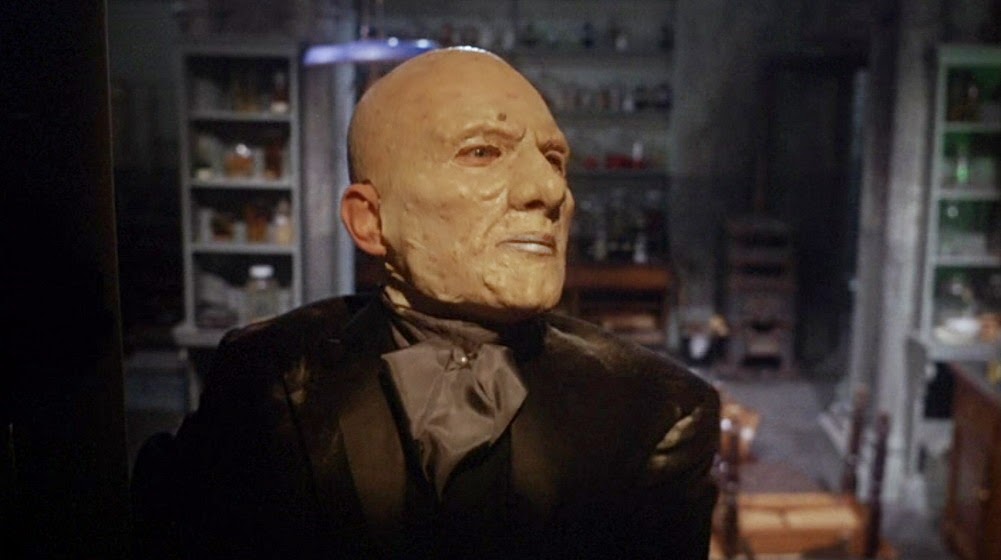 From the very first scene, there's a beautifully executed pre-credits sequence, much like a Bond film, where it apparently begins with a finale from a previous adventure. A wordless, shocking, concise flurry of bloody action that sums up the Doctor's methods, before he has to set off on the run from the police, again. This is director Terence Fisher on top form, even though it was close to his last film. 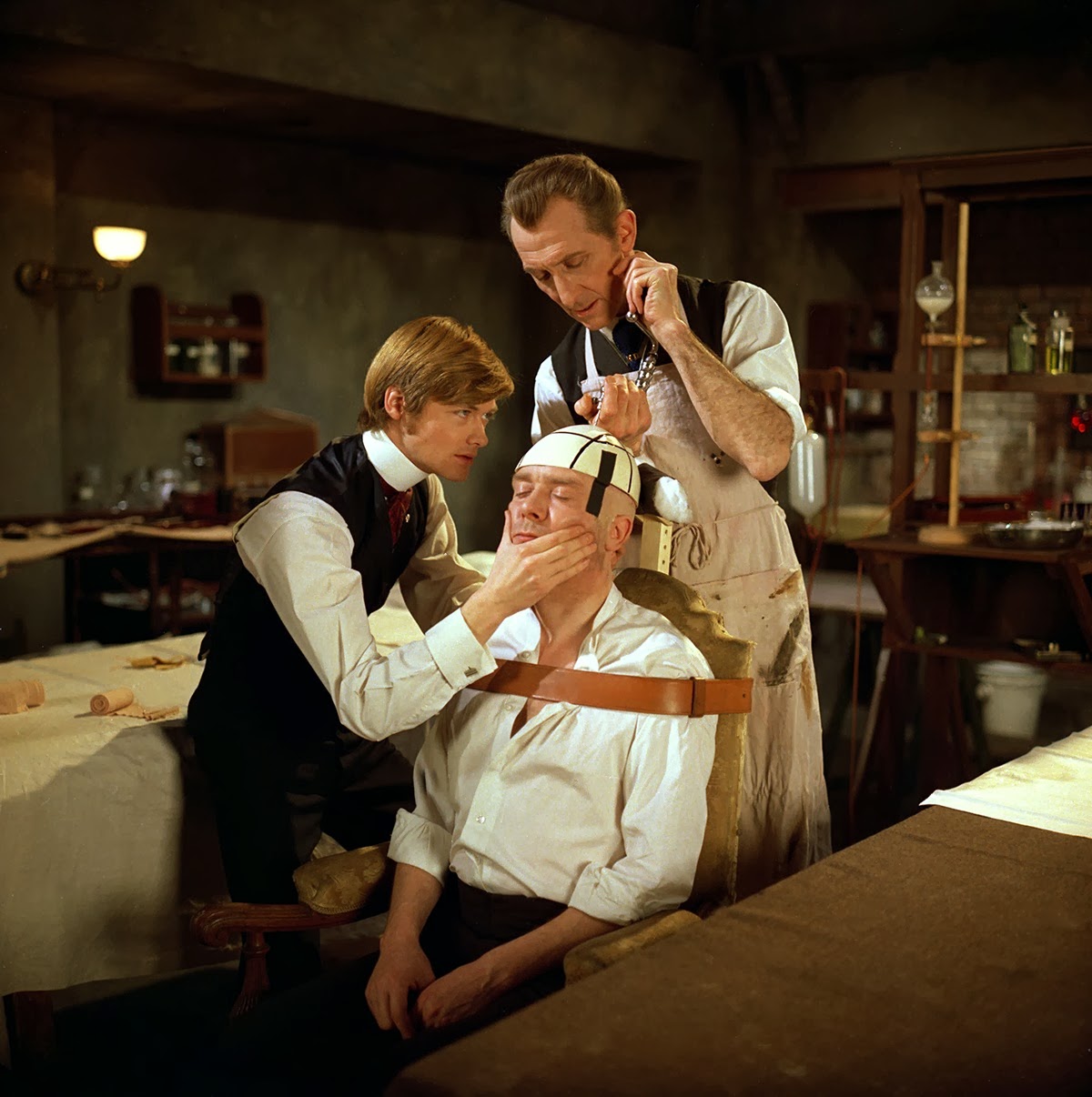 Throughout the Hammer Frankensteins, there are many memorable moments, but this film packs in most of my favourites. Not just the tension of 'how much they'll show' of the surgical operations, but also the suspense of being discovered as the police close in on the Doctor's hideout, and a spectacular problem with a corpse that won't stay buried. 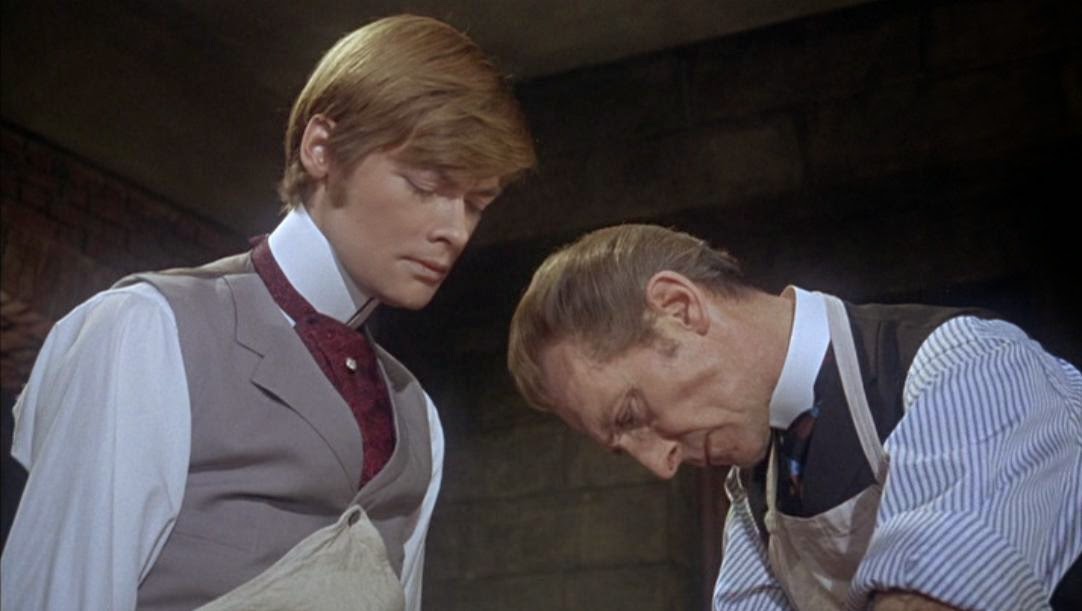 A particularly strong cast has Simon Ward co-opted into assisting the doctor. While he looks angelic, Ward was cast as both heroes (Young Winston) and psychopaths. Here his character gets our sympathy, despite the ambiguities of his character. 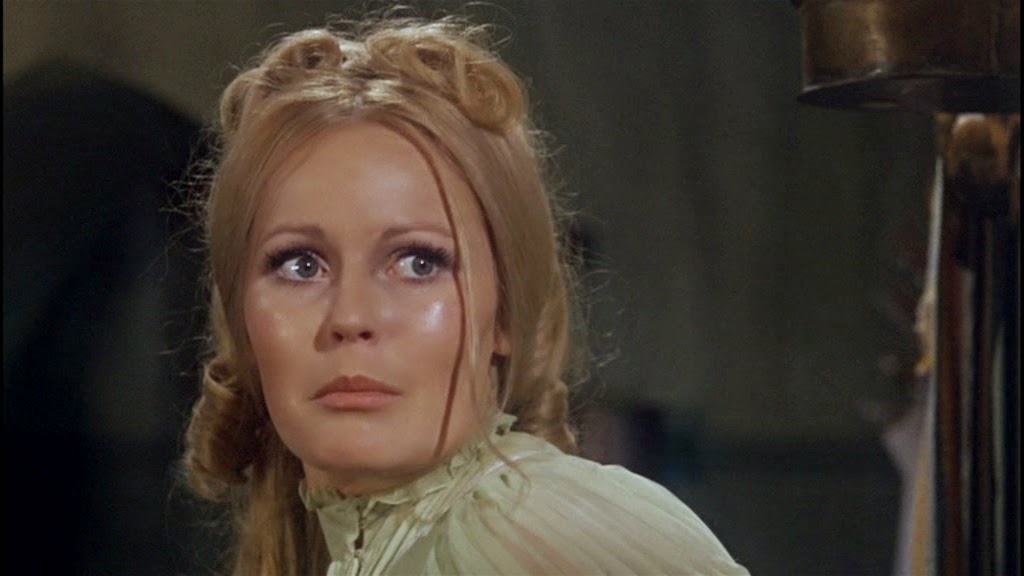 Veronica Carlson gives her best performance as his blackmailed girlfriend, with far better scenes than her usual 'waiting to be bitten' vampire victim.

Peter Cushing is excellent as Dr Frankenstein, surprising fans with his convincing portrayal of a vicious sleaze. This film, along with Corruption (1968) contain the actor's most controversial scenes. 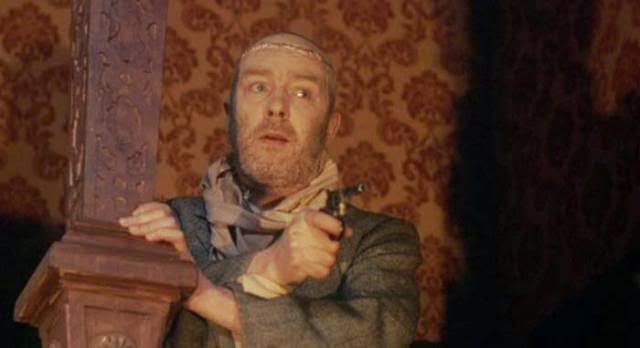 Freddie Jones is the other standout performance. An actor capable of playing extremely eccentric characters or difficult scenarios such as this with invention and conviction. No wonder he became a favourite of David Lynch after being cast in The Elephant Man (and then Dune, Wild At Heart, Hotel Room, On The Air). His faltering voice conveys extreme vulnerability, but also an inner steel that can match Frankenstein's obsession with success. 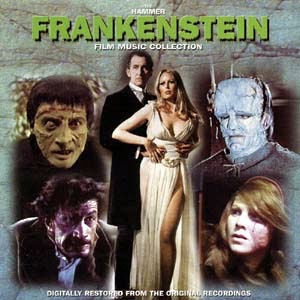 This is a cleverer story than usual, less concerned with pseudo-science, and more interested in the insecurities of all the players. Deeper emotions and higher stakes make this gripping as drama and horror, regularly reaching frenzied highs, particularly the extended climax. Speaking of which, James Bernard's score (available on the above CD) evokes the sadness, suspense and excitement with one of his most memorable scores. 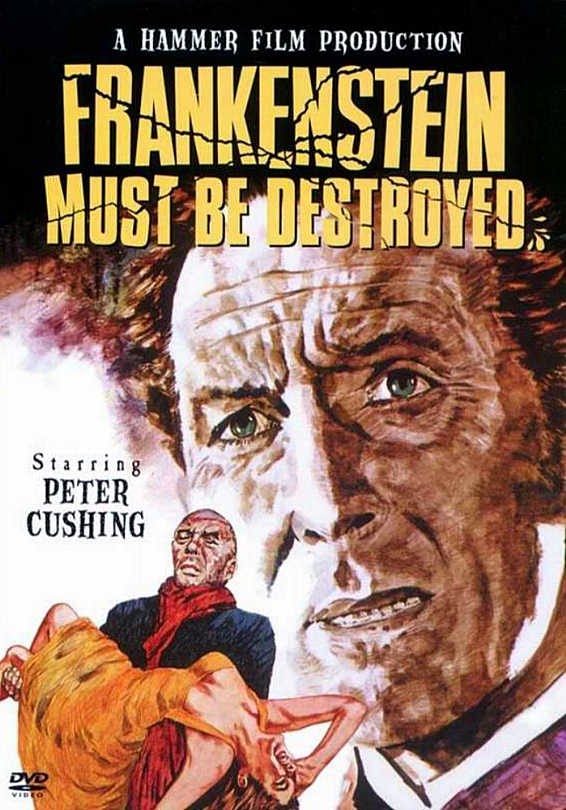 I watched the US region 1 DVD (above) - which is thankfully presented in the original anamorphic 1.85 widescreen. It's now definitely due for a blu...

Currently only available in the UK on a made-on-demand DVD-R from the Warner Archive Collection.