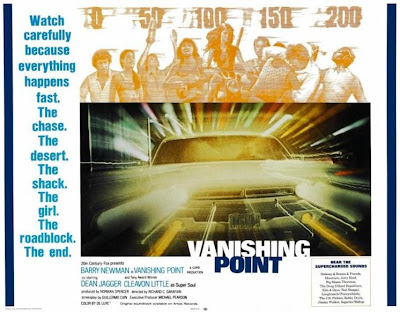 Barry Newman appeared in two very different action movies, both involving extended tyre-ripping car chases.  Fear Is The Key and Vanishing Point kept re-appearing in cinemas throughout the seventies as welcome supporting features and I was lucky enough to catch it on the rebound. Its images lodged in my subconscious, but I wasn't sure whether I'd still enjoy it 25 years later.

As a teenager I accepted many films at face value - either they were entertaining or they weren't. A movie that was one long car chase was certainly entertaining, Kowalski, the guy being chased by the police, was obviously the guy whose side I was on. I wasn't analysing it all for subtexts or reading any of the characters as metaphors for facets of society - a friendly biker, a madman in a sports car, a church of Jesus in the middle of the desert... 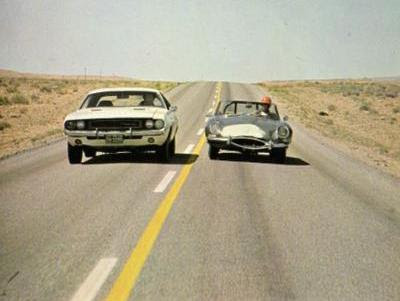 So what on Earth did I, as a young teenager, make of the drugs, the music and the naked girl on a motorbike? As far as I recall, I completely missed the drugs reference, enjoyed the music, and simply assumed that some people in the American deserts ride around naked. This was still a time when peaceful counter-cultures and hippy ideals were frequently presented in mainstream movies. The bikers, the music, and the mind-blown vibe helped teach me more about the anti-establishment than the establishment, and the wilds of Nevada looked like a better place than deepest, darkest suburbia.
But as a result, I didn't want to try drugs, drop out, live in the desert, get a bike or even drive a fast car, but I was certainly open to the laidback attitude and, well, just how friendly everyone could be. That is, except the racist rednecks, the police, and the villainous homosexuals. The positively bizarre gay characters are necessary for a plot point, but they don't need to be gay. They certainly don't need to wear pink shirts, act like nellies or carry handbags (give me a break). The celebrated documentary on gay representation in cinema, The Celluloid Closet, heavily criticised the scene. I can't wait to hear director Richard Sarafian talk about it on the commentary track... 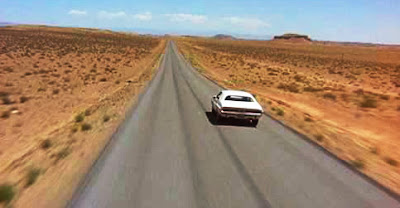 Vanishing Point is an example of an 'arthouse' movie that can be exciting and entertaining. Could you get a wide release of a movie like this today? It's certainly 'of its time', an experimental story - an example of a road movie that you can join for the ride and see what happens.
The other comparable title that springs to my mind is Jack Cardiff's Girl On A Motorcycle, which is more like a travelogue. It also ducks out of the journey into multiple flashbacks to hint at the character's backstory. Vanishing Point improves on it in many ways, making it a high-speed chase rather than just a trip from a to b. It also looks like Barry Newman is actually driving, which Marianne Faithfull never did. It also removes the never-ending prose, as we hear her thoughts spelling out bloody everything. 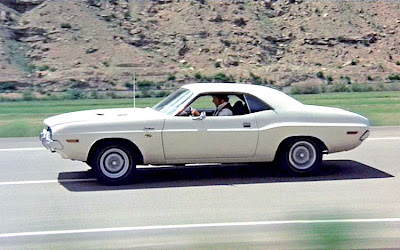 I'm less familiar with Easy Rider, which Girl On A Motorcycle also predated. Easy Rider hasn't got the constant pursuit driving it, and the soundtrack wasn't as appealing to me. While it's easily the most famous of this 'genre', I'm more devoted to Vanishing Point and Electra Guide In Blue, which I'll revisit soon.
The music, the characters, the cinematography make this an experience, and of course there's the driving... 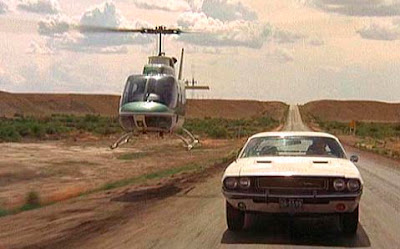 A regular component in car stuntwork in sixties and seventies cinema is Carey Loftin. He worked on this, Bullitt, Duel, The French Connection, Fear Is The Key, Grand Prix, Diamonds Are Forever, The Getaway and even The Love Bug. Wow. His specialty seems to be not just stuntwork, but really high speeds. The cars drive fast, there's no sneaky sped-up filming - what you see is what you get. Blistering handbrake turns, near misses, leaps, side bumping, chopper chases... 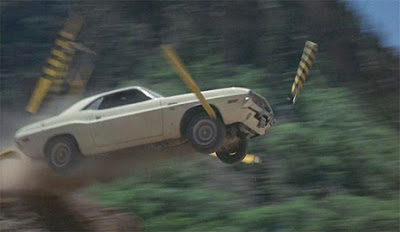 There are some spectacular wipeouts along the way but, A-Team style, there are no casualties. The police don't have much on Kowalski but they chase him to the state border anyway - like Smokey And The Bandit, literally on speed.

Barry Newman is Kowalski, a character sat halfway between straight society and a hippy commune. Strange that the actor should star in two movies then move back to TV for two seasons as a pro-active lawyer in Petrocelli. His blissed-out vacant look from behind the wheel is haunting. Also check him out as a tough guy in the action thriller Fear Is The Key (1972). 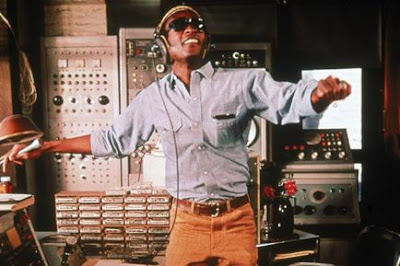 Kowalski is championed and guided by 'Super Soul', a blind DJ (Cleavon Little, before Blazing Saddles) who warns him about 'the blue meanies' over the radio. Theirs is the strongest, almost telepathic relationship in the story. If Little hadn't been an actor, he'd have been a storming DJ. In the rest of the cast, one of the nastier cops is played by Paul Koslo, who was also dependable 'Dutch' in The Omega Man, filmed the same year. In the desert, there's an almost unrecognisable Dean Jagger (the quasi-Quatermass of X-The Unknown). 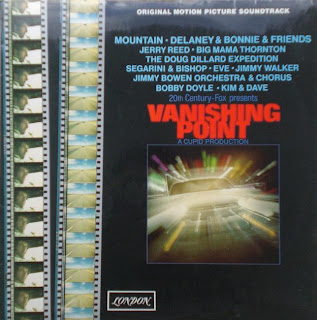 On the soundtrack, among the country music names I didn't know, are Kim Carnes, Rita Coolidge and Burt Reynolds collaborator, the late Jerry Reed. This isn't my kind of music, but I still enjoy the soundtrack. Coincidentally, it's been recently released on CD from Harkit Records. The original vinyl front and back covers are shown above and below. 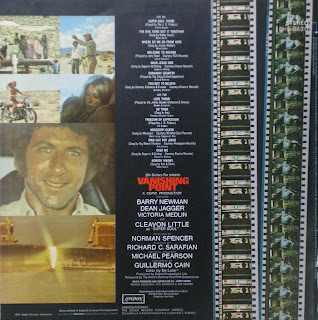 After watching the UK DVD (below), the sights, sounds and stunts have inspired me to upgrade to the blu-ray, which also offers the longer US cut which features Charlotte Rampling in the additional scenes. I'm also looking forward to the making-of documentary, and hearing the director's commentary track on the blu. 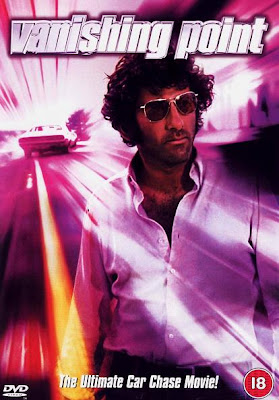 Here's an original trailer on YouTube (the DVD and blu-ray is presented in 1.85 widescreen)...
I'm not even going to mention the 1997 TV movie remake with Viggo Mortensen and Jason Priestley...
Posted by Mark Hodgson at 11:37 am