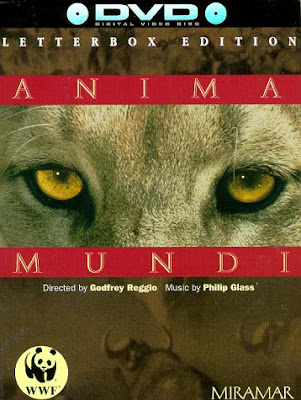 ANIMA MUNDI
(1992, USA)
Like a missing chapter from Koyaanisqaatsi, director Godfrey Reggio assembled this film from stock footage, again commissioning a soundtrack from Philip Glass and again angling for an underlying theme of the natural world against mankind. If you've enjoyed the 'qatsi trilogy', this closely follows their template. 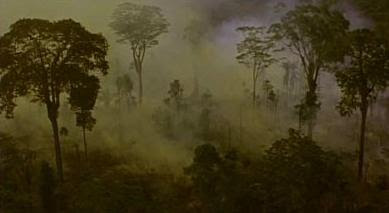 Commissioned by the World Wildlife Fund, (the original WWF), the remit was to present the diversity of animal life - ugly and beautiful, peaceful and aggressive, microscopic and huge. It's an intense montage of spectacular footage without any voiceovers or captions. In turns funny, eerie and astonishing, but with fewer surprises for anyone who watches a lot of animal documentaries, it's the music that makes this a hypnotic experience, despite its relatively short running time. 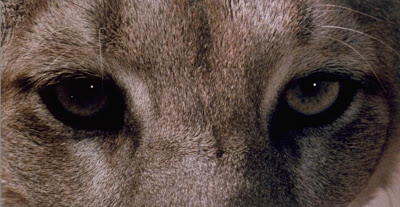 The repeated images of animals in close-up, staring straight at the camera, at the viewer, intercut with decimated rainforests, hits harder than the voiceovers that often wrap-up nature documentaries. After the smouldering levelled forest, we're face to face with a tiger or a chimpanzee. They look intelligent but helpless, weary of the destruction, patiently waiting for it to stop. Anima Mundi may best be watched as a support feature for Koyaanisqatsi.
Apparently this was only once released on DVD in 1998 (pictured at top), an all-region NTSC release with non-anamorphic 1.85:1 letterbox widescreen. The transfer isn't the highest quality, possibly only from an analogue source, and the compression is particularly poor for the first few shots of the film. But after that it's perfectly watchable and good enough to engross. But only 28 minutes long with no extras. 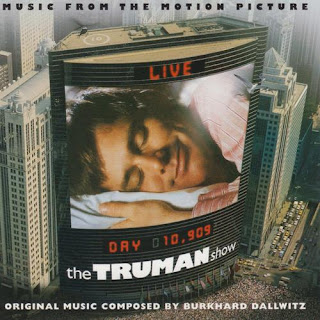 The best-known remnants from this project are two tracks from Philip Glass' score which were repeated in The Truman Show (1998), which also recycled cues from his Mishima (1985) and Powaqqatsi (1988) soundtracks.
My review of Koyaanisqatsi (1983) is here.