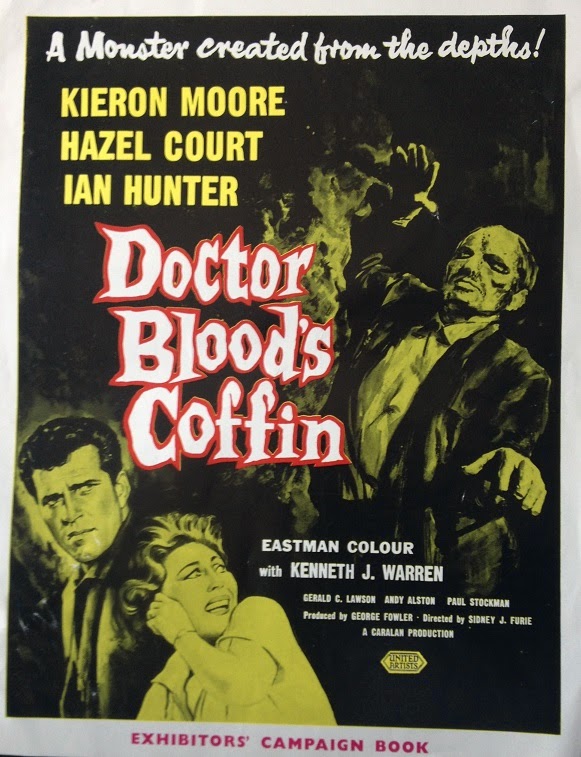 I enjoy this more each time I see it. Originally sought it out after seeing a spooky photo of a man fighting something moulderingly undead in Denis Gifford's Movie Monsters. Seeing it, at first on late-night TV, the story was disappointing in that the punchline doesn't appear sooner. But a recent less-cut version on TV added just enough to make this a low-budget b-movie nasty, with the spectacular Hazel Court sealing the deal for fans of sixties' Brit horror.

A string of disappearances from a small village in Cornwall. The local police are stumped but we can easily guess what's going on, even though the assailant attacks from the shadows, the bloody title completely gives it away. Doctor Blood is up to no good. 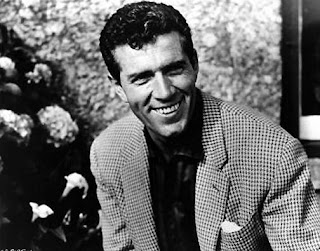 Before even the opening titles, only thirty seconds pass before Kieron starts shouting. This isn't to say I don't find him watchable. This lack of charisma in a leading man is as unintentionally entertaining as it is a mystery. Here he's a serial murderer who radically experiments on his subjects while they're not only alive, but still awake! The clumsy storyline reveals his morally-bankrupt identity before he starts wooing the heroine. How are we supposed enjoy their romantic day out? It's not played as suspense, like Hitchcock would have done, but as a budding new relationship.

There's another amusing mis-step when one of the kidnapped spends a long twenty minutes clawing his way out of a subterranean surgery. The narrative keeps returning to the crawling character like a running gag - nope, still not getting anywhere. In addition, if this had been a Roger Corman flick, the abductees would be the scantily-clad daughters of the village, not a bunch of wheezy old extras. 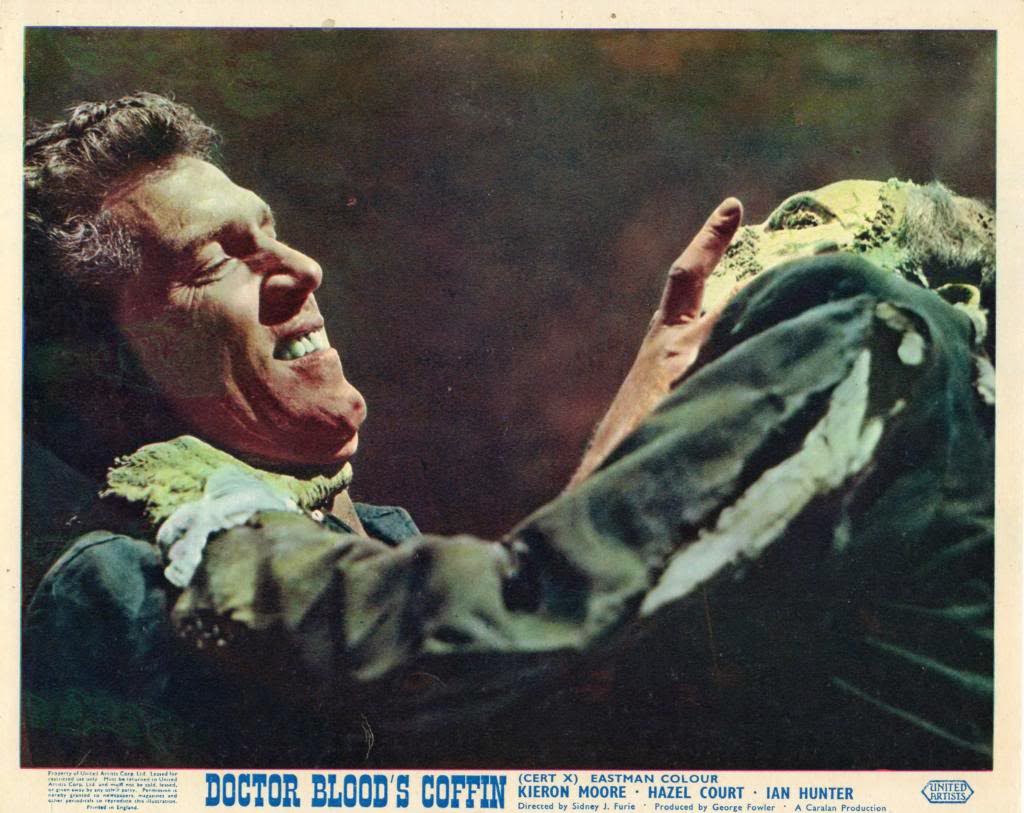 The bad doctor is so focused on his 'work' that he doesn't even widen his hunting ground, leaving the police in a spin as to which kidnap victim they're supposed to be looking for. Also, anyone who gets in his way quickly winds up in Dr. Blood's coffin. He never thinks through the details, like alibis. His trail of clues is clumsy and inefficient, much like his wooing.


The picturesque Cornish locations make a welcome change from Black Park and the suburbs of London and, despite the interiors being shot in a London studio, the sets look authentic and blend in well. 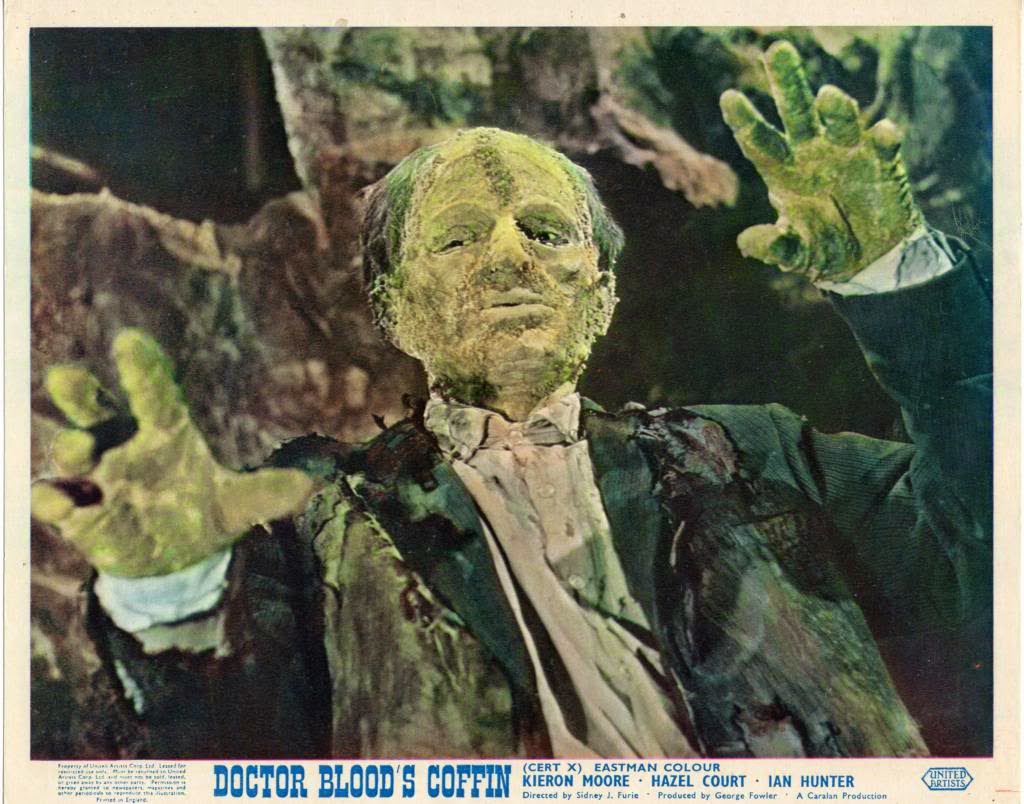 Hand-coloured lobby card - not the colour he is in the film!

There's blood and even a little gore, which would have leapt off the screen in Eastmancolour at the time, presuming it wasn't snipped by the censor. The special make-up for the result of Blood's experiments (above) looks really very good, more convincing than anything that later appeared in Night of the Living Dead, and it was duly splashed across the publicity art. 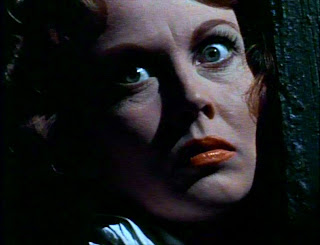 To compensate for Kieron Moore's heartless lack of charisma, Hazel Court amply warms up the screen as Nurse (Nosey) Parker. The late actress is so utterly professional that she can answer the phone with, "Dr. Blood's surgery", without a hint of camp or irony. Court appears here just after starring in Hammer's The Curse of Frankenstein and The Man Who Could Cheat Death, and just before a winning run of American horrors, appearing in three of Roger Corman's Edgar Allan Poe cycle - The Premature Burial, The Raven and The Masque of the Red Death. 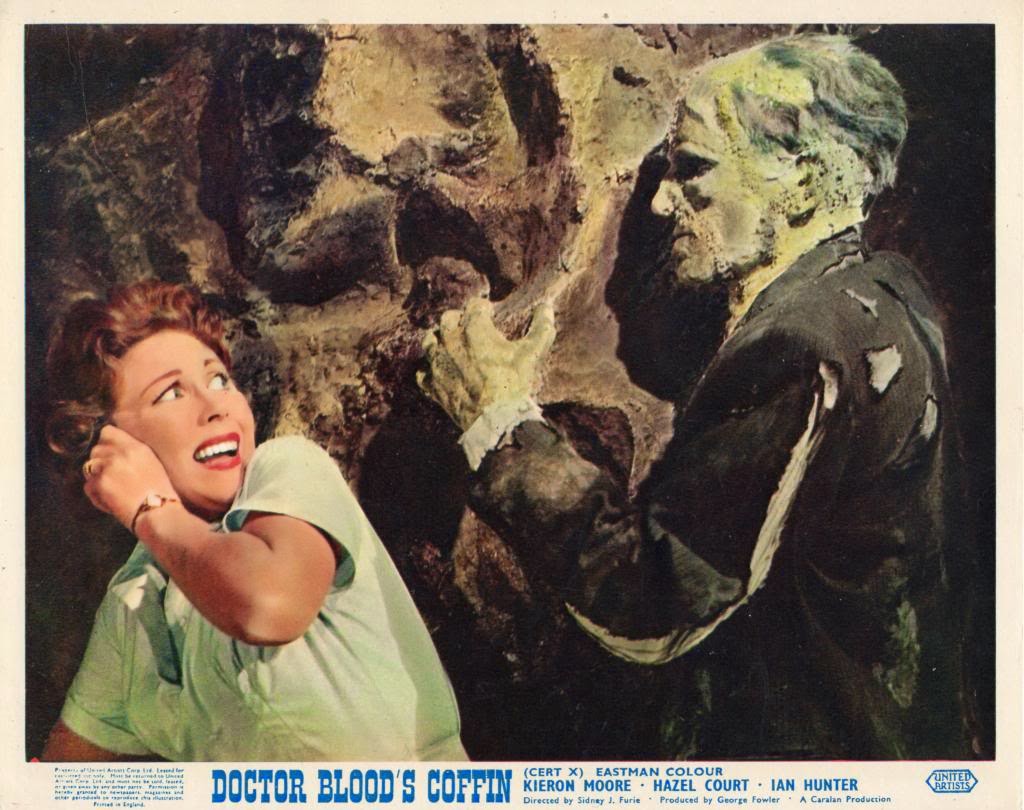 Dr. Blood is one sick little bunny - you don't see everything he gets up to, but he's a sadistic, vengeful, oblivious fan of human experimentation. He's nastier and less likeable than many of the movie Dr Frankensteins. His carelessness indicates he's more psychopathic than calculating. While the direction and script are slack, there's enough here to make it worth a look. 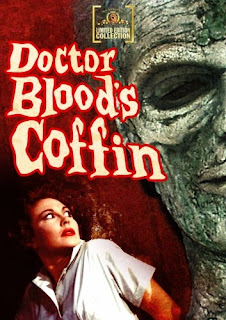 Doctor Blood's Coffin was very late getting an official DVD release anywhere, debuting on MGM's made-on-demand service in November 2011. While the restoration was good, the image was spoilt by being slightly horizontally squeezed. The 1.66 framing within a 16:9 anamorphic presentation, should have been stretched out to a standard 16:9 to correct the appearance of taller, thinner actors. 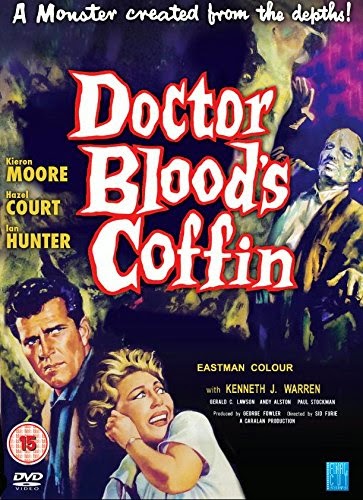 In July 2014, there was a DVD release in the UK, which unfortunately repeats the 'visual squeezing' fault. This is so close to the MGM release that it's even an NTSC picture, but coded for the UK as a region 2 disc. 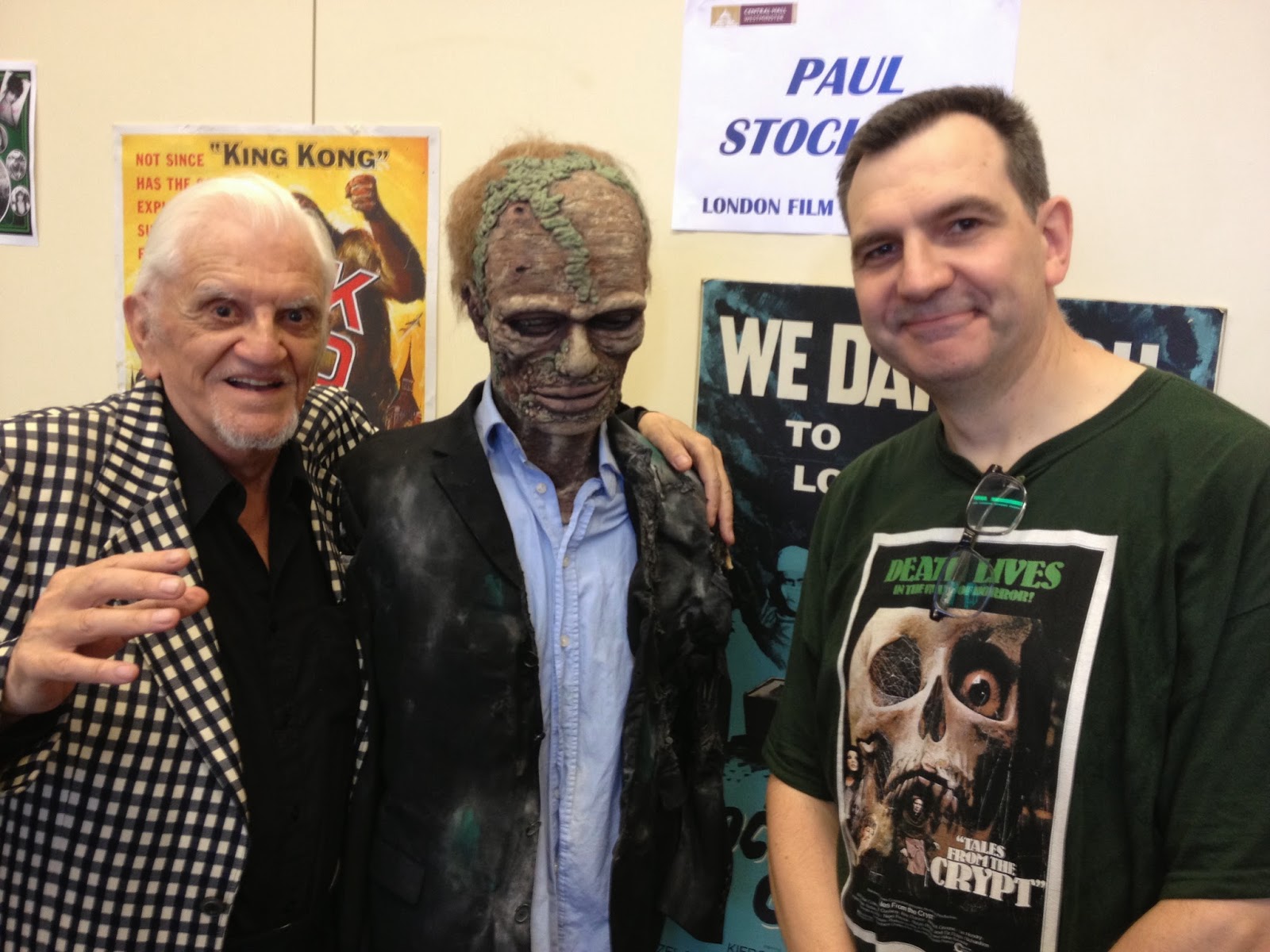 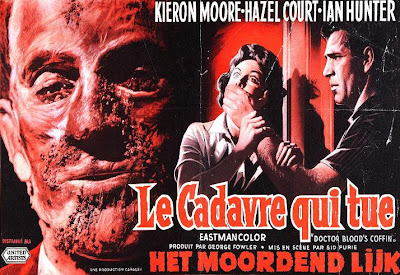 This fantastic French poster is from sci-fi/horror poster site Wrong Side Of The Art.