This is all about The Warriors (1979) and probably not too interesting if you haven't seen it. Here's a taster of the images and characters from the film, if you want to seek it out. If you have seen it, you'll know that Coney Island is the Warriors turf, you dig? The safe home base they're trying to get back to.

Shot over 35 years ago, almost totally on location around New York City, The Warriors has dozens of filming locations that you can still visit because they've changed very little. 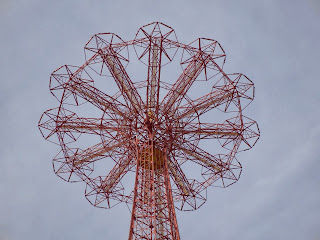 Just after returning from New York in November last year, I found this blog, Nick Carr's Scouting NY, with this guide to every known location used in the film. Just my luck to find this article after I get back, and it also throws up information about the cheats used in the film, stations that didn't play themselves in the movie, even Coney cheated... (more later). A reminder that I should really watch films immediately before visiting their locations, but have you any idea how many films have been filmed in New York? I know I don't. 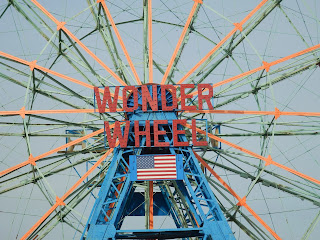 In terms of my own half-assed detective work, I've been to New York twice since seeing the film, and twice I visited Coney Island, in 2000 and 2013, hence my mix of analogue and digital photos. It's also a pleasant place to visit, being a tranquil, seaside break away from busy, busy Manhattan, yet only a subway ride away.

Besides the fun fair, there's the massive boardwalk stretching along the top of the beach, and a pier. The whole area was once ridiculously popular in the summer. Both our visits, the beach was deserted.


A short walk from Coney Island station, just before you hit the beach, is the fun fair. Looking towards the sea, the Cyclone rollercoaster is at the far left of the fair. 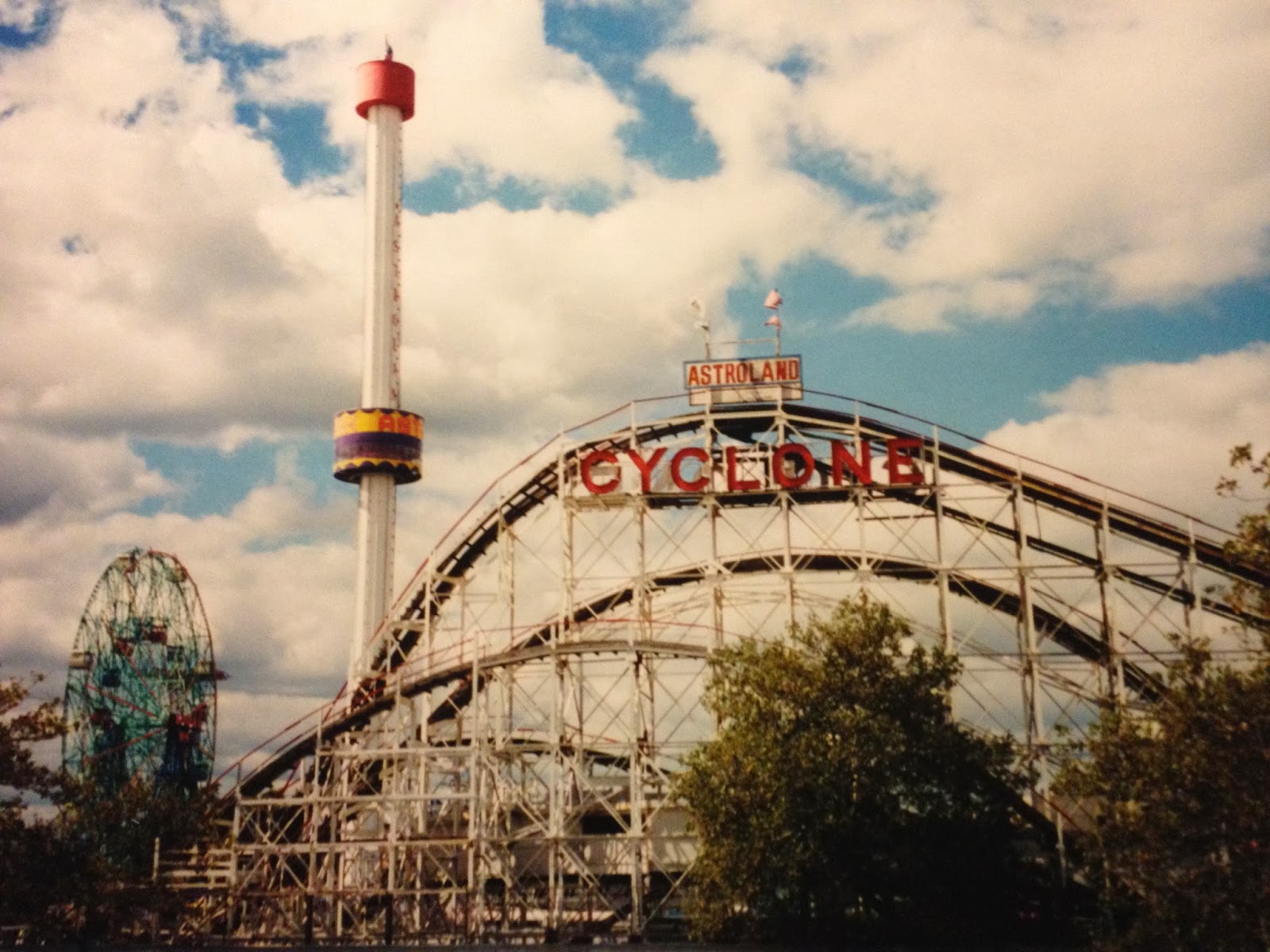 We rode this in 2000. It's rather old but still packs a punch - the element of danger amplified by its ancient-looking wooden structure! (Note that the observation lift was still there, and note the Astroland sign.) 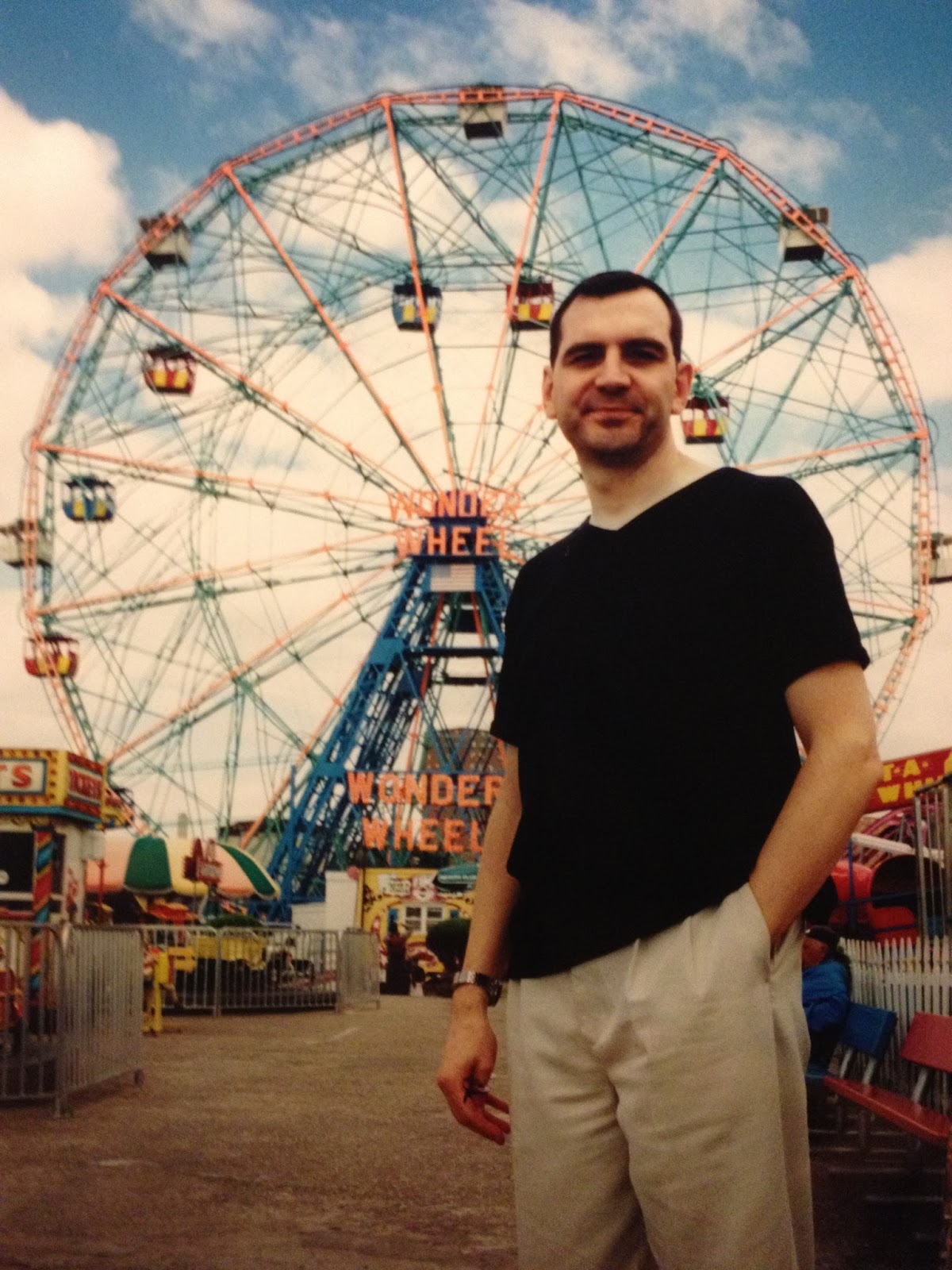 I missed riding the Wonder Wheel in 2000, when the fair was called Astroland. Now it's all called Luna Park and, but was shut for the winter. Maybe I'll ride it next time. The fair took damage from Hurricane Sandy in 2012 (according to Wikipedia).

The Wonder Wheel symbolises Coney Island for the Warriors. The opening shot of the film is the Wonder Wheel at night. Super that it's still there. 2000 was a big year for Coney island. Besides our visiting, it was the location for Requiem For A Dream, directed by Darren Aronofsky who grew up in nearby Manhattan Beach. 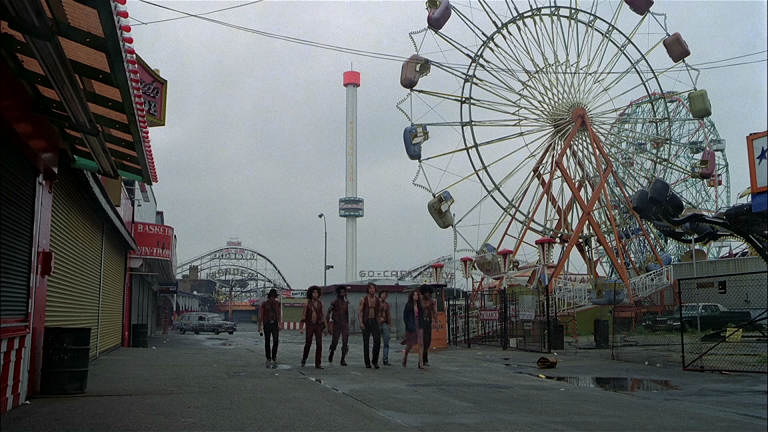 Above, a screengrab from The Warriors: the road, the Cyclone at the end of the street and Wonder Wheel (far right) are still there now, but the orange-tipped observation tower and the foreground ferris wheel are now gone (my 2013 photo below). 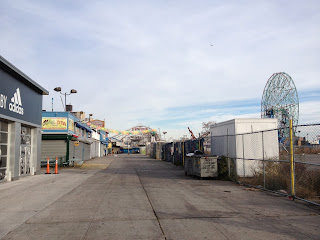 Same angle, but only the Cyclone at the end of the road, and the Wonder Wheel remain. 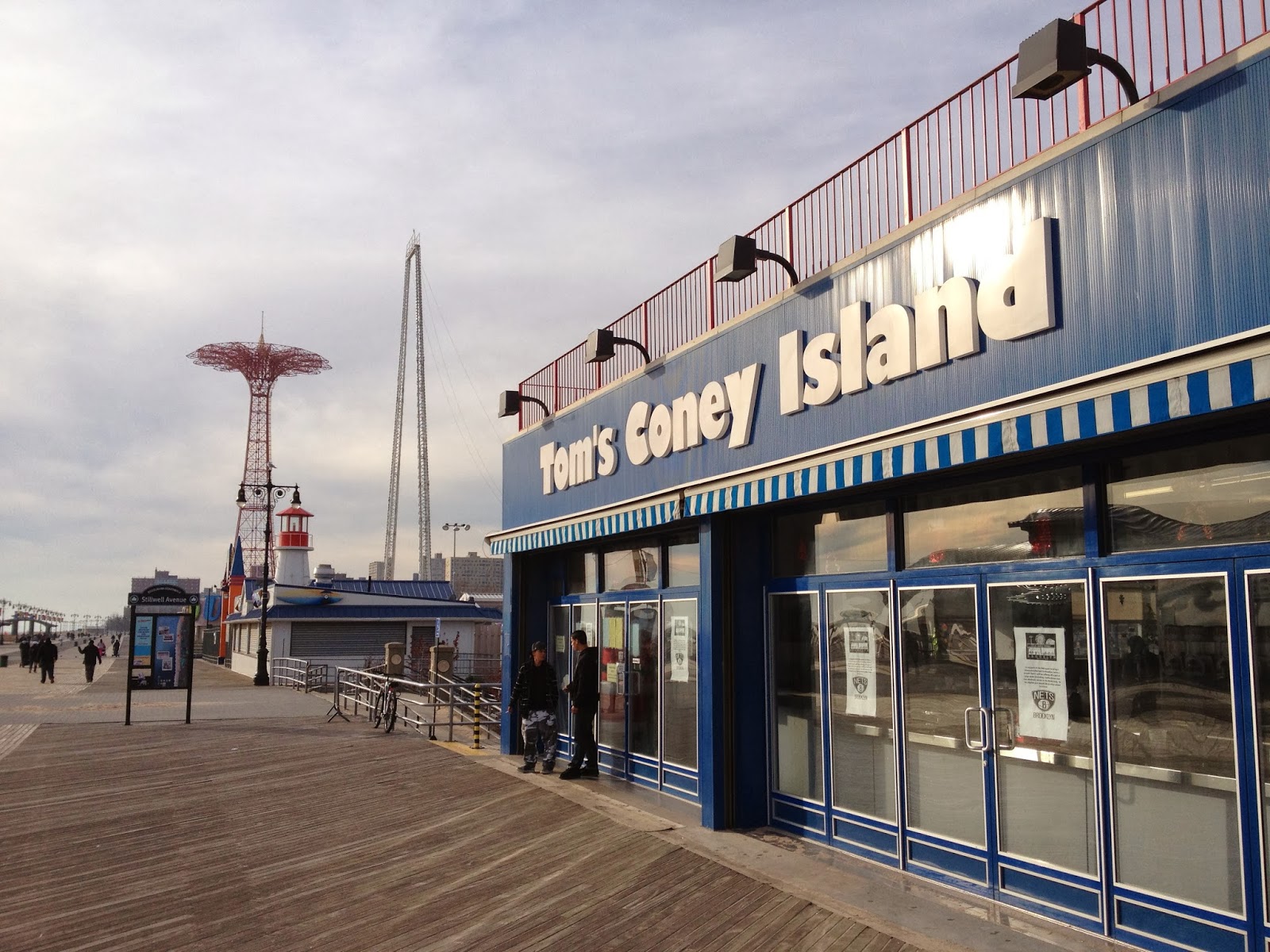 On the boardwalk, this time around there was a cafe and a couple of gift shops - books of photos of how the fun fair used to look, and even a couple of items with The Warriors written on them (pounce). 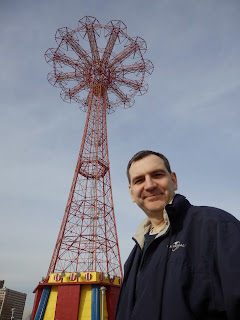 Between our two visits, the Parachute Jump - the huge red tower of girders - had been completely dismantled and rebuilt. I remember Aronofsky saying in an interview that it had been torn down, but didn't hear it had gone back up again! 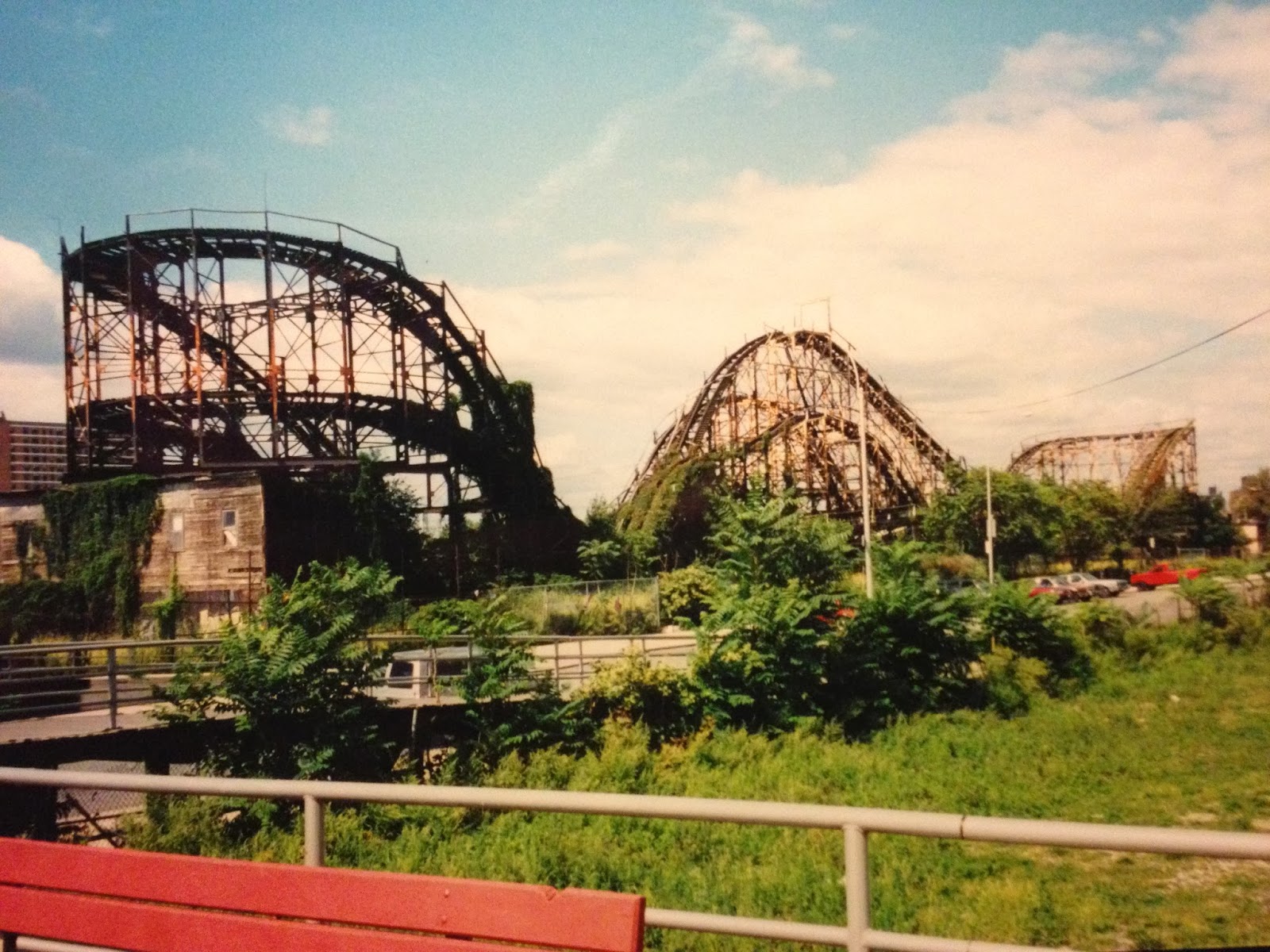 Further along the boardwalk, there is now a parking lot, a lot overgrown with vegetation and then a sports stadium. Back in 2000, one of those lots was a second, larger, wooden rollercoaster - The Thunderbolt. Apparently it was dismantled later that year, so we only just caught it. I'm thinking it stood where the new stadium is now.

I think The Thunderbolt rollercoaster was the setting for the final resting place of The Beast from 20,000 Fathoms. Of course, a friend living in New York has pointed out that while Beast was set in New York, it was all filmed in L.A.! The shots of the rollercoaster would have been visual effect shots (photographs?) and a Ray Harryhausen model. 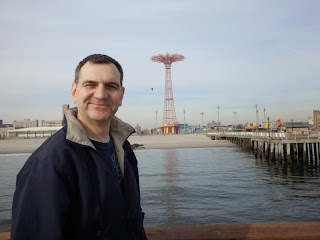 Another wrinkle in treading in The Warriors' footsteps is that, as pointed out in the Scouting NY article, the beach scenes don't match the beach at Coney Island! In the film, the beach is backed with sand dunes. But as you can see below, there are no sand dunes, just a flat, gentle slope right up to the Boardwalk. So where's the beach? 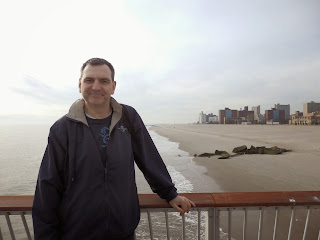 The wonderfully long end credits shot, looking along the beach, where they walk into the distance looks very much like the view you get from the present Coney Island pier. Here's me thinking of a happy ending. 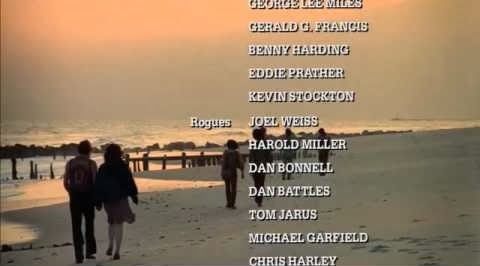 The credits show two lines of rocks heading into the sea, along with a row of wooden stakes. My 2013 shot (below) seems to match pretty well - the wood has gone, but there are very similar lines of rocks. 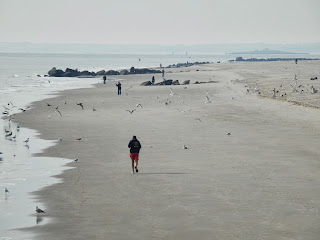 This was taken from the pier, but zoomed in a long way. 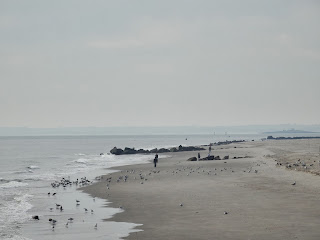 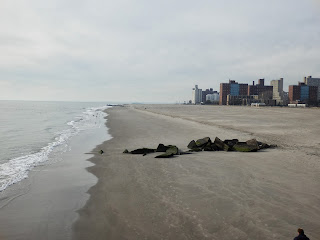 Zoomed out all the way - distant rocks barely visible

Coney Island makes me happy, but next time this blog means we can visit many more locations, like the site of the big gang meeting...

Scouting NY guide to The Warriors filming locations, with dozens of 'then and now' photos.

All photos by Mark Hodgson and David Tarrington