A selection of pages from defunct movie magazines from 1967... 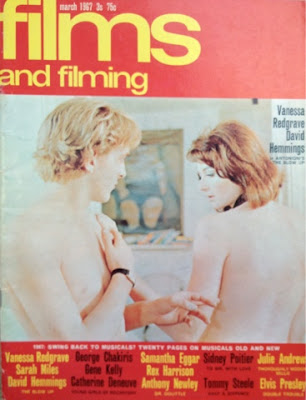 On the front cover, David Hemmings and Vanessa Redgrave in a scene from Antonioni's Blow Up. The sixties were in full swing, but the big budget movies being cranked out include a raft of musicals like Doctor Doolittle, featured inside.
John Frankenheimer's Grand Prix debuts in the ultra-wide format of Cinerama. Many movies shot this way had been historical epics rather than set present day. This incorporated specially shot footage from the previous year's actual Grand Prix races. So much footage was shot that Frankenheimer had enough to devise impressive, multiple, split-screen montages. Note the ticket prices in the advert at bottom left - the best seat in the stalls costs 20 shillings (1 pound).
Only three years after playing the Queen of the Nile in Cleopatra, Elizabeth Taylor drastically changed her image for Who's Afraid of Virginia Woolf? As a middle-aged, overweight, drunken wife of a college professor (Richard Burton), she terrifies two students (George Segal and Sandy Dennis) by airing her relationship problems at an increasingly dramatic, intimate dinner party.


Roger Corman directed this Jack Nicholson script. The Trip starred Peter Fonda, Bruce Dern and Dennis Hopper. The publicity photos taken on set had a tough job in emulating the cinematographic techniques that in turn attempted to visualise the psychedelic experiences of L.S.D. (impossible on this low-budget). The publicity gained from this three-page photo-feature was in vain - The Trip was banned from cinemas and home video in the UK until 2003!


Daughter of revered actor John Mills, Hayley had previously been a child actor in beloved British classics (like Whistle Down The Wind) and Disney films (like The Parent Trap). But once she'd hit twenty, she sought more adult roles starting with the kitchen sink drama The Family Way. A year later, this startling image from Pretty Polly confirmed that her career had grown up!


More magazine Flashbacks:
Lawrence of Arabia and more in 1963.