'Tis the time of year for outdoor cinema and next month the annual season at Somerset House will offer something extra. This spectacular print is artist Peter Strain's representation of Brian De Palma's 1976 Carrie. It's always interesting to see the different posters that were used by different countries, but after a while you get to see all the best ones. Recently, I've noticed more one-off screenings are having new posters produced, especially from repertory cinemas.

But this is something else again, celebrating the movie as art rather than a poster. Images that no longer need a title over them. As well as promoting the film, it also represents the crux of the story by blending two key scenes. Go here for more movie-oriented work from artist Peter Strain.
16 different artists have been specially commissioned to produce art for 16 different films from this year's Film4 Summer Screen at Somerset House. Among the open air screenings this year are Terence Malick's Badlands, the first Predator, the second Gremlins and the grotesque Whatever Happened To Baby Jane. Here's the website for all the screenings, taking place August 8-14.

At the same time, the commissioned art, including Joe Wilson's superb take on Throne of Blood (above), will be on display in the West Wing Galleries in Somerset House August 1-21, and a limited edition (200 of each) of prints will be available for sale at £40 each. The exhibition is curated by Print Club London, which is how I came to hear about it all. More details about all the participating artists here...
I'm looking forward to seeing them all at this preview evening on July 31st, also a chance to grab the prints before they're released for sale online. If you want to go along, just RSVP as described in the flyer below. 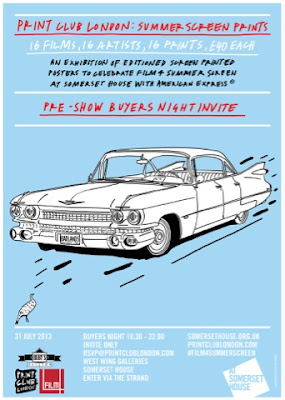 The prints then all go on sale on August 1st, both at the West Wing Gallery and also online here through the Print Club website.