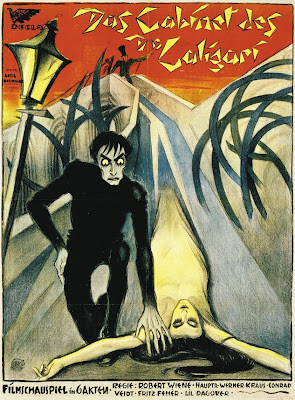 A man in black with murder in his eyes creeps into a beautiful woman's bedroom at night. A mad doctor uses his expertise for his own evil ends. A serial killer has a town in panic. 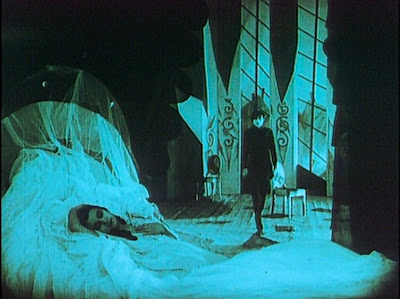 These are all regular elements of horror films, but in 1920 feature-length horror films were rare (I can only think of The Student of Prague, 1913, before it). The Cabinet of Dr Caligari heralded the start of a wave of horror films made in Germany for the next few years, including The Golem, Nosferatu and The Hands of Orlac. While they continued on from themes and characters in horror literature and the production designs of stage plays, these were among the very first to present sustained supernatural terror on film.

The influence of these silent movies inspired and influenced much of the far more famous 'golden age of horror' of early 1930s Hollywood, and predate most of the American silent horrors. Many of the key creative talents, actors, directors and production designers, soon moved to America where their ideas and style fed into that pre-code horror boom. Much like today, if something was a success abroad, Hollywood were happy to invite in the talent responsible.

Basically, these are very rewarding films for fans of horror, seeing the genre being born and taking shape. Despite their age, they're also unique nightmares, wildly creative and beautifully crafted. The make-up for the creatures in Nosferatu and The Golem is hugely effective. The set designs for The Cabinet of Dr Caligari are wildly surreal, and bravely presented for almost the whole length of the story. The question is, are these warped surroundings also part of the story... 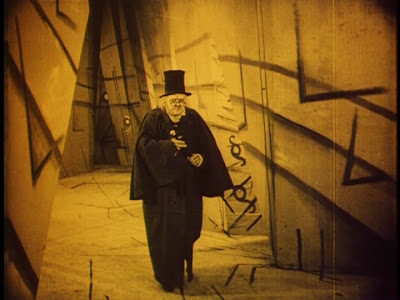 A murder in a small village coincides with the arrival of a new attraction at the local carnival  - Dr Caligari and his mysterious assistant, who sleeps all day and night in a coffin-like cabinet. The murdered man's friend is determined to track down the killer, spurring the police (who spend most of their time at their desks) to make an arrest before it happens again... 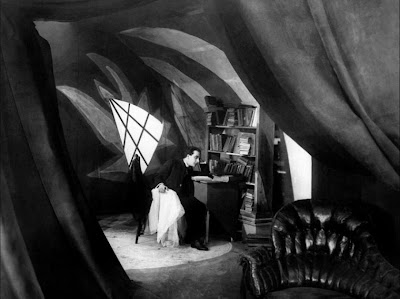 While many of the first horror films were based on classic stories, this has an original script, inspired by a real murder and fuelled by public desperation at the end of the Great War. It has a social message, critical of mental health institutions. The surreal presentation may have disguised their sentiments, but the metaphors were all too clear. A late rewrite (which I thought I had been enforced on them) changed the story's message by means of an added prologue and epilogue. 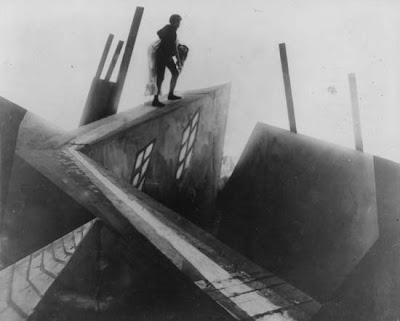 This isn't just a story of murder and madness, everything about it looks psychotic. The whole film takes place on angular expressionistic sets. Like above, instead of a rooftop, the set merely suggests a rooftop - the only recognisable shapes here are two rough windows and a surreal chimney stack. 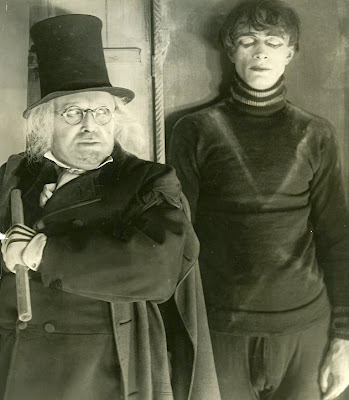 Besides the wild scenery, the acting is also exaggerated. To watch this without seeing other silent films of the time will give the impression that they're acting is wild, but they're trying to convey 'expressionism' in their performances. (For example, compare it to Paul Wegener's naturalistic acting in The Student of Prague, 1913). The benchmark of this style is Dr Caligari himself. Werner Krauss is brilliant - menacing, unhinged, random. In comparison, I could only tink of the head of the family in the dinner scene in David Lynch's Eraserhead - with his unpredictable, extreme emotions. 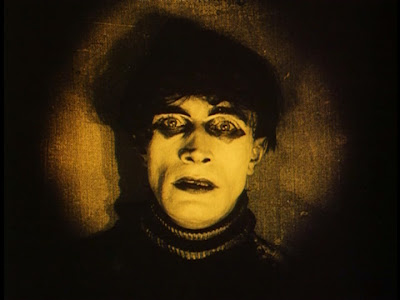 Conrad Veidt is the iconic 'monster' - tall, stealthy, with the ability to look demonic. An excellent and versatile actor, he's an early horror star, with leading roles in Waxworks, The Hands of Orlac, The Man Who Laughed and a remake of The Student of Prague (1926) again opposite Werner Krauss. He then made a fairly smooth transition to roles in 'talkies', appearing in Michael Powell's The Spy In Black and The Thief of Baghdad (as Jaffar!) with one of his last roles being in Michael Curtiz' Casablanca.

For years it was very hard to see these early films on anything but very scratchy prints (often with truncated or missing shots). Bootlegs, videotapes, public domain DVDs and YouTube compression have compounded the film faults making these movies very hard to appreciate. But now that some have been carefully restored and released on DVD, I've finally been able to understand their 'classic' status. 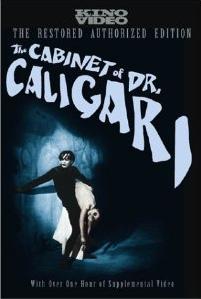 I think the best versions are currently the Kino International restoration on DVD in the US, and in the UK, an earlier restoration from Eureka, which is commended for it's orchestral score and subtle colour tinting. 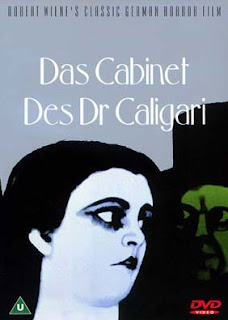 While the Eureka DVD is the best quality I've ever seen, many scenes are spoilt by a dark horizontal 'join' running across the top of frame, often through the actors' faces. The Kino International DVD apparently doesn't have this fault, though the first five minutes are said to be of inferior quality to the Eureka version. The choice is yours. More details in the following link...


DVD Beaver compares the Kino version to the 1996 restoration used by Eureka (illustrated with screengrabs)... 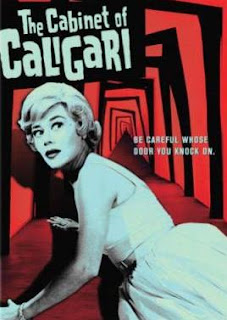 Also, don't get this silent movie confused with the 1962 American remake with a very similar name, The Cabinet of Caligari. This rather straightforward version of one of the subplots amps up the sexual element of Freudian psychiatry (as much as was possible at the time - i.e. not very much). It's always a joy to see and hear Glynis Johns (Vault of Horror, Mary Poppins, Miranda), but this more closely resembles a William Castle film without the gimmicks, than a German expressionistic nightmare.