Over the years, I've seen references to different versions of Barbarella. But while there is little hard evidence, some of these photos provide tasty clues to the Barbarella you don't see in the final film...

The only existing alternate scene that I know of is the other title sequence. Over the same shots of Barbarella's zero-gravity striptease, there were differently animated titles that covered up more of Jane Fonda's nakedness. Originally the US version had less nudity, but the current DVD master uses the more revealing version. 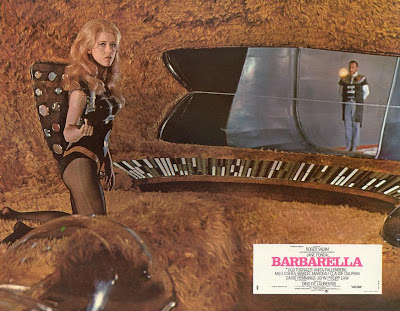 This lobby card presents a puzzle. Barbarella is in the costume she wears at the start of the story, for leaving Earth's orbit and travelling to Planet 16. But through the main window, above her piloting controls, is someone standing outside! This looks like an unknown character, in costume in a specially-built set. This looks too complex to be just a publicity photograph. 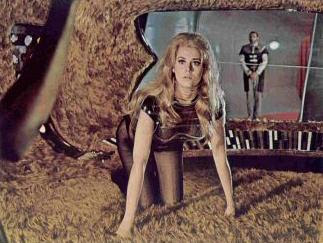 An oxygen atmosphere outside the spaceship infers that Alpha 7 is docked. Certainly the film begins rather abruptly, with no idea of where Barbarella has just come from, or why she needs to enter her spaceship left drifting in space. I'm guessing this isn't on Earth. 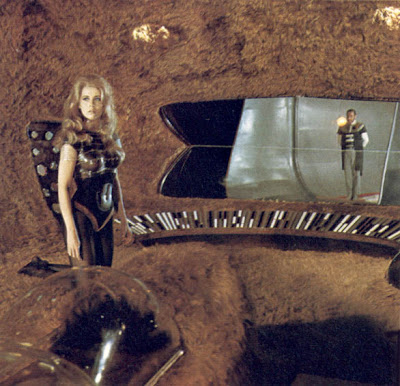 The only other character in this part of the story is a voice on the radio that clears her to leave the solar system. A voice from the 'Base'. My best guess is that Barbarella docks into a space base (to refuel?) before departing. Perhaps the budget wouldn't stretch to the required modelwork. Perhaps the docking was too rude! 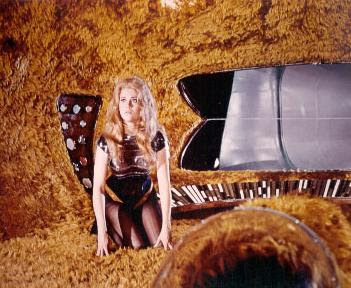 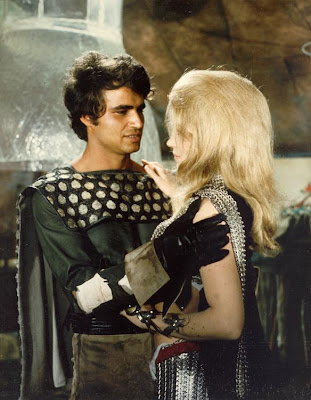 A very funny scene with Dildano, played by a young David Hemmings (below), is memorable for the hand-to-hand sex scene and his secret hideaway full of broken gadgets. But who is this character from the same scene (above)? 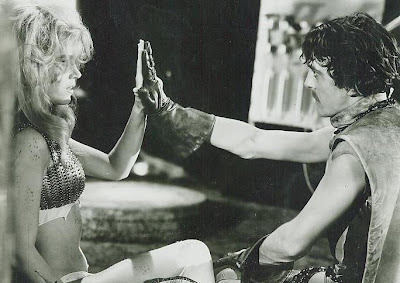 Here are more photos from the same scene, when it was first shot with a different actor. The scene originally had an Italian actor in an entirely different costume. The other notable difference is that Fonda is naked for the hand-to-hand sex scene. 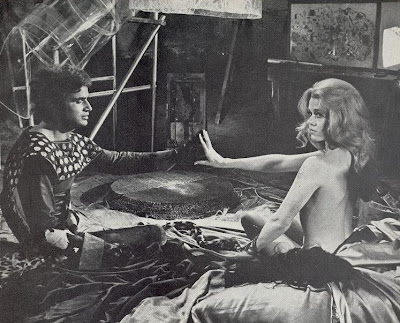 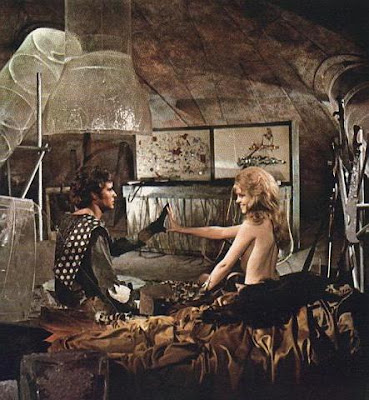 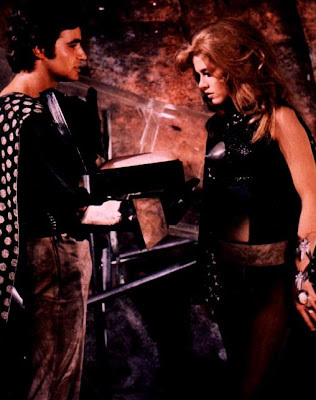 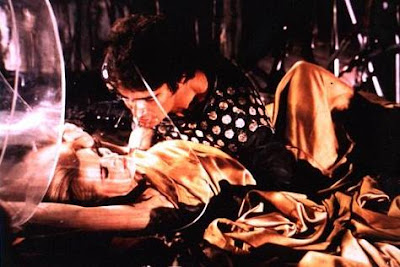 Looks like Dildano got more amorous in this version. 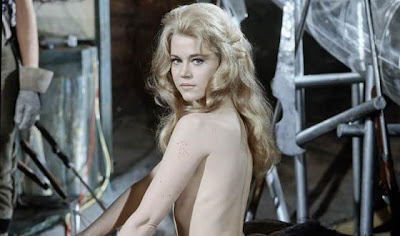 A pair of publicity photographs taken during this alternate scene. 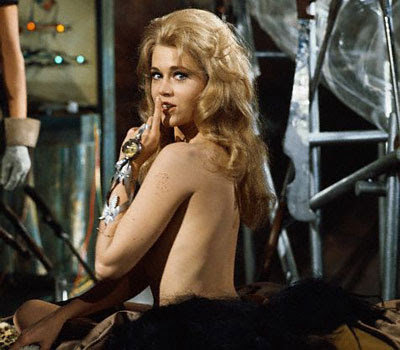 SHARING A BED WITH THE GREAT TYRANT 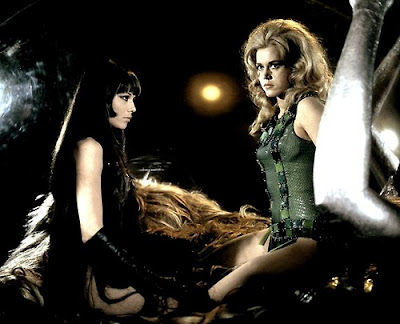 A scene rumoured to have been left in the international version, but too saucy for America, was a love scene with the Black Queen (Anita Pallenberg). The following photos hint at how the scene looked. Despite being used in various lobby cards, I've not confirmed that this ever reached any finished version of the film. 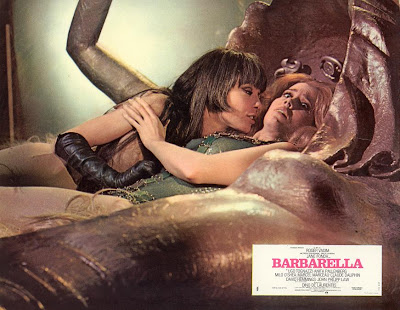 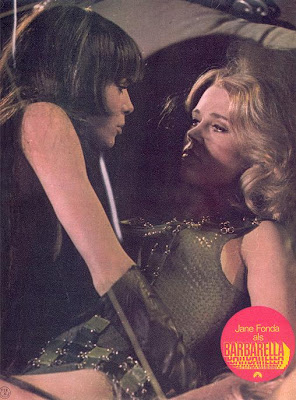 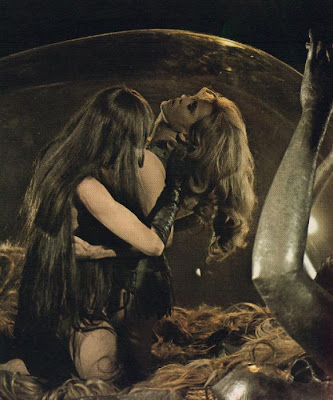 These shots, show the protective bubble has formed around the bed, placing it in the story after the Mathmos has engulfed them. In the film, you can briefly see Barbarella pushing the Queen away from her, on Durand Durand's viewscreen. 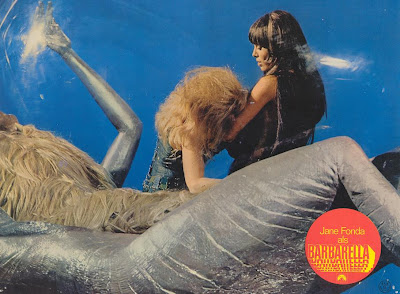 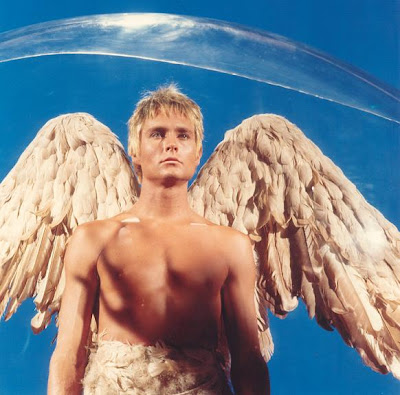 Publicity shots and press photos could be posed on any available set. Often looking nothing like what was actually filmed. But they can also taken while a scene is in progress. All we can do is make an educated guess. 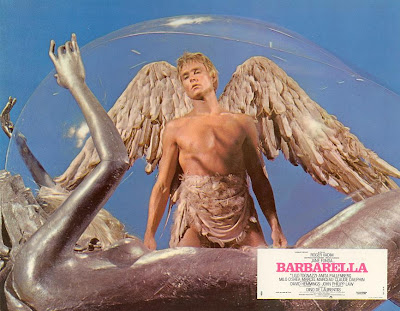 Pygar in the Queen's bed inside the Mathmos? 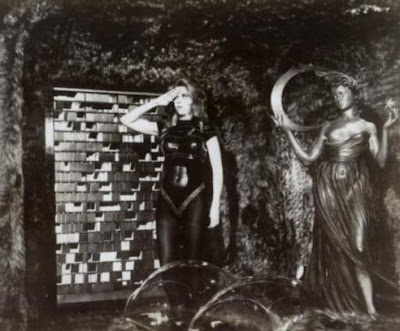 Barbarella saluting. When she salutes the Earth President in the film, Barbarella is naked and facing the President on the viewscreen of the statue, here behind her.
So who is she saluting? Is this just a rehearsal? 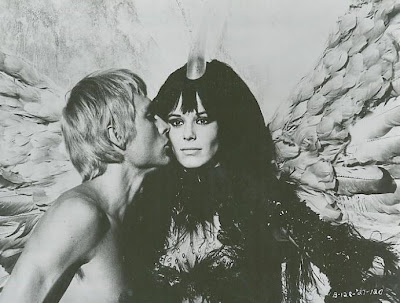 Pygar kissing the Queen - this doesn't happen in the film, and you'll also notice that she is wearing his wings! Presumably an example of using props to stage a publicity shot. 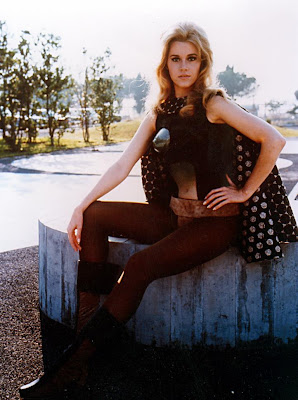 Lastly, a publicity photo that gives us a rare look at Barbarella in the sunlight.
There are no exterior shots in the film.