THE BRIDE FROM HELL (1972) - Hong Kong horror before Tsui Hark 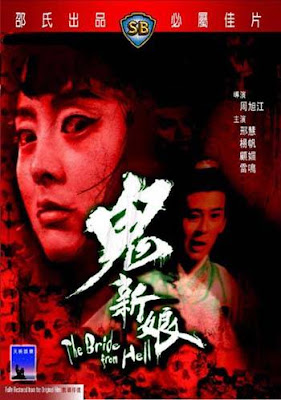 Had to buy this on the strength of the title alone. Wasn't expecting much and therefore wasn't disappointed. It's a spooky tale of revenge by a ghost with a grudge. No martial art swordplay, not many special effects, but a creepy tale treated seriously for the most part, like the older traditional Chinese ghost films (like Enchanting Shadow), and not the slapstick kung-fu that Hong Kong horrors soon developed into.

Our travelling hero, Yun Peng (Yang Fan) finds a house in the forest and wants to plead with the beautiful owner, Feng Anu (Margaret Hsing Hui), to let him rest for the night. Catching her by surprise lying naked on her bed (a shot missing from this Thai version) he does the chivalrous thing and offers to marry her, to protect her honour. But marriage means he's now trapped by a vengeful spirit. As those around her begin to suspect, she reveals a variety of powers to match those of the demon-catchers sent to exorcise her, while she targets her victims...

It's out of step with contemporary Hammer horrors, and decades behind Tsui Hark's revitalised supernatural stories that began in 1979 with The Butterfly Murders. But I enjoyed the serious approach and the many and various ways the Taoist master has up his sleeve to combat ghosts and demons. Though running around ringing a bell isn't quite as thrilling as seeing a vampire hunter wielding a stake. 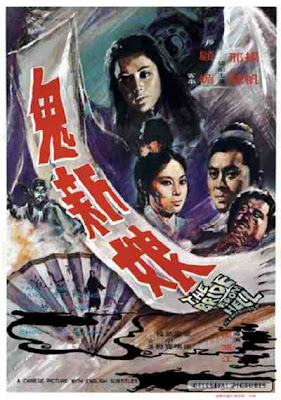 The film opens with a solitary greenlit coffin in a swamp from which emerges a shrouded female ghost. All very Ringy, so I was disappointed that the battle to vanquish her didn't return to this spooky spot. But it resembled the 1960s Japanese ghost stories, without the elegant special effects and is useful to compare this with them.

It's seriously let down by the tiny modelwork and heavy reliance on jump cuts, without the camera even being locked off. The only successful visual effects are some very large-scale props. But the acting, the widescreen colour photography and production values make it very watchable.

I could only find a VCD of this when shopping in Malaysia - it's non-anamorphic and has the Chinese, Thai and English subtitles all in view throughout. But there's also a DVD edition available from YesAsia, thankfully with a 2.35 anamorphic image.

This article on YesAsia has been a great help as a guide to other genre movies from the Shaw Brothers production team.