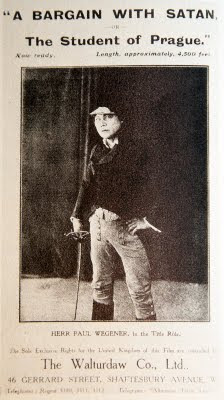 Once again, I've been chasing movies that I saw tasty photographs of in Denis Gifford's Pictorial History of Horror Movies (see the earlier article below).

During the silent era, Germany was a powerhouse of macabre movies, rivalling the early horror output of the US. The Cabinet of Dr Caligari (1920), Nosferatu (1922) and The Golem (1920), not forgetting the gothic sections of Metropolis, have remained influential. First on the 1930s Universal Studio horrors, more recently on Tim Burton's two Batmans.

These two versions of The Student of Prague are less well known supernatural films, made by many of the same production crew behind other horror classics. They're both available on Alpha Video in the US, though I suspect the 1913 version is incomplete, running at only 41 minutes. The 1926 version runs at 90 minutes. Both have pretty poor picture quality, apparently sourced from analogue tape, but are quite watchable. Maybe not listenable though, I prefered to listen to my own choice of music while watching them. But I'm now sufficiently impressed with both films to want more carefully mastered versions.

The respective stars are Paul Wegener and Conrad Veidt, two actors who headlined horror movies before Karloff, Lugosi or even Lon Chaney. 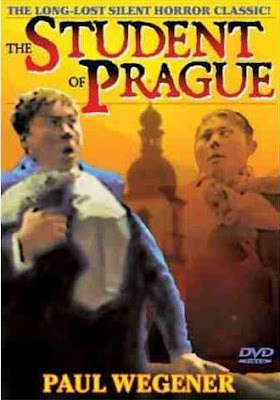 THE STUDENT OF PRAGUE
(1913, Germany, Der Student von Prag)
I think I'm right in saying this is an early example of a feature-length film - it predates even Birth of a Nation! It's also an early starring role for Paul Wegener, before he made his three Golem movies, or The Magician, Alraune or Svengali. He's now best known for The Golem - the 1920 version was a huge influence on Universal's first Frankenstein. The 1915 version and its sequel, The Golem and the Dancer are now lost films. Coincidentally, the story of The Golem was also set in Prague.

The Student of Prague is a twist on the legend of Faust (also filmed in Germany in 1926), taking the theme of doppelgangers from Edgar Allen Poe's story, 'William Wilson', and set in the 19th century. Balduin, a poor student, falls for a wealthy heiress. But he has no hope of marrying her without making a name for himself. He's enticed by a mysterious sorcerer to make a bargain with Satan. He becomes very wealthy, but of course there's a catch...

While Balduin is supposed to be the best swordsman in Prague, we never see any duels - a drawback for this version, possibly because of missing footage. Plotwise, I was puzzled why the best swordsman was unable to turn his skill into monetary gain. 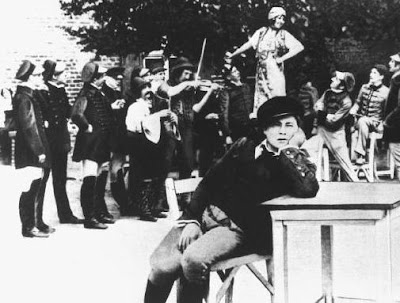 Wegener's performance is very natural, modern enough to still be watchable today, not at all how silent movie acting is popularly remembered. He plays a mannered, believable character that helps you forget just how long ago this was made.

The trickster magician, Scapinelli, is creepily played by a spidery hunched John Gottowt (who later appeared in the legendary Nosferatu).

Wegener's co-director Stellan Rye was working prolifically at the time, but his career was cut short when he died fighting in the first World War. This is impressively made for such an early film, one of the most expensive in Germany at that time.

This version of the story has basic but effectively staged split-screen effects, showing the student literally haunting himself. The production also benefits from using actual locations in the 'old town' district of Prague. 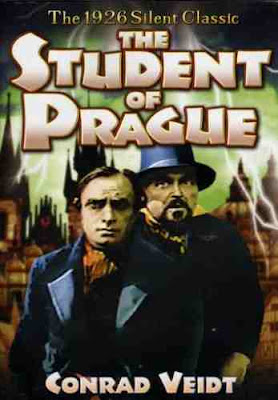 THE STUDENT OF PRAGUE
(1926, Germany, Der Student von Prag)
Conrad Veidt took the lead role for the 1926 remake of The Student of Prague. Although Wegener starred in The Golem remake, I guess it was too much for him to play the student again - he'd only just passed as a student in the 1913 version, when he was 39!

Veidt is probably better known for playing Nazi spies in British (The Spy In Black) and American (Casablanca) wartime films, as well as the Grand Vizier in The Thief of Baghdad remake. Though he was cast as Nazis, the fact that he worked in Britain was because he was anti-Nazi. Before he fled Germany, he was associated with many of the earliest macabre roles, famously as Cesare the sleep-walker in The Cabinet of Dr Caligari, The Two-Faced Man (Der Januskopf - a Jekyll and Hyde riff also with Bela Lugosi), The Hands of Orlac, The Man Who Laughs (both later remade) and a version of Rasputin.

This version of Student of Prague reunites Veidt with Werner Krauss, the original Dr Caligari! Krauss' unique approach to the fiendish Scapinelli has him literally bending over backwards to appear perversely 'different'. But his make-up is a little too thick for such a sophisticated film. His performance alone is creepy enough, without the need for the thickly painted eyebrows and beard. Personally, Scapinelli is just as good in the 1913 version, even though he appears less and usually in long-shot. The scene where money pours from his sleeve is, for instance, is more cleverly done in the earlier version, in a single long take.

The story is much the same, though there's the exciting addition of a formal sabre duel, with Veidt impressively doing much of his own swordplay. Also, Scapinelli leaves less to chance in this version, shaping several 'coincidences' (like redirecting an entire foxhunt) to keep the poor student on his downward spiral. A surprising example being his huge shadow reaching up a giant wall to tip the balance of fate. 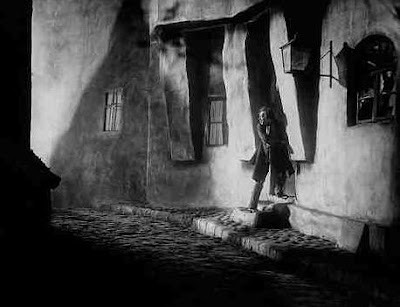 Although the interiors are realistically styled, the streets of Prague are expressionistic, in keeping with previous German films of the fantastic.

Director Henrik Galeen worked with Wegener on Alraune and also the first Golem (1915), as well as writing the 'adaption' of Dracula for Murnau's Nosferatu, famously without the permission of Bram Stoker's estate. But his experience doesn't explain the poor continuity in some key scenes, like when Scapinelli first meets Balduin. It's shot from several angles circled around the two men, but the close-ups repeatedly betray the absence of the other actor in an overly fast-cutting scene.

While the 1913 version seems ahead of its time, this one seems a little behind. But it's worth seeing the fuller, more intricate take on the story, and especially to see Krauss and Veidt reunited after The Cabinet of Dr Caligari.

Here's a trailer made to promote the DVD release of The Student of Prague (1913) on YouTube...

These Alpha Video DVDs from the US are a reasonable way to assess these films, and they're the only way to see them! I was sorry to discover that no other DVD versions are available, not even in Germany. I hope that because of their historical credentials that this will change and both films will get remastered like many other German silent horrors. Note that the cover art on the Wegener version uses a photo of the actor much older than his character appears in the film.

The Student of Prague was remade with sound in 1935, again in Germany, starring Anton Walbrook (Viktor/Victoria, Gaslight, The Red Shoes). But I can't find it anywhere...

There's more, interesting reference information about The Student of Prague (1913) at FilmReference.com. The German Films archive site lists the film as running 57 minutes.

Another review of the Alpha Video 1926 version is here at SilentEra.com, as well as a great list of silent movies out on home video.

My article on the Golem movies made after Paul Wegener is here.