Further to my first posting (an illustrated introduction and review) on the 'way out' 1968 movie Barbarella, here's a look at the main characters and the actors who played them... 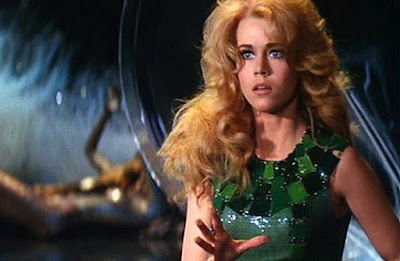 Barbarella is sent out alone on a mission, with the Earth President confident that her skills as both an astronaut and a resourceful adventurer can single-handedly take on an unknown planet and the Universe's most destructive weapon. Though she appears to be a typical blonde (certainly in the comic strip), her naivety is shared by all Earth people of the 40th century, in a society where there is no war, and sex is now cerebral and not physical. She flies her spaceship, Alpha 7, alone - she's a top-level astronavigatrix. Though unused to fighting, she adapts quickly to using weapons from Earth's Museum Of Conflict. Like the hippy children of the sixties, she's open-minded and not judgemental of the debased inhabitants of the strange new planet she explores. She has no problem having sex with anyone she's only just met. Just as well, because this frequently happens. 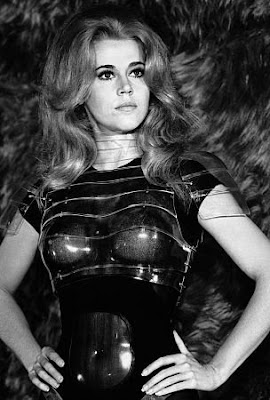 Jane Fonda is fantastic as Barbarella - the role called for a beautiful, sexual actress who excels at both drama and comedy, and could walk the fine line of space adventure and tongue-in-cheek! By the time the film was released, Fonda had rebelled, against America's involvement in Vietnam and for feminism. This was of course at odds at Barbarella's publicity campaign, monopolising on Fonda's near-nakedness and the character's knack for being exploited by almost everyone she meets. 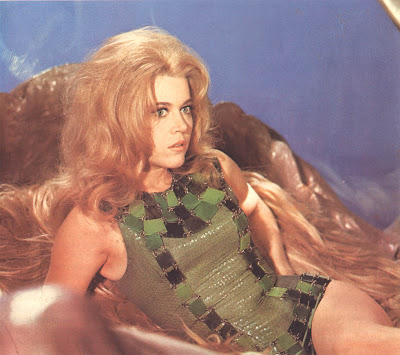 The film marked an end to Fonda's lighter, comedy roles. She pushed immediately towards tougher parts, with the depression-era They Shoot Horses Don't They?, then the hard-edged thriller Klute, where she played a prostitute. Beginning a period where she distanced herself from the "pornographic" comedy. She continued with a mix of political (Coming Home, The China Syndrome), dramatic (Julia, On Golden Pond) and back to comedy films (Fun With Dick and Jane, California Suite, Nine To Five). Nowadays Barbarella is a long, long way from scandalous, and Fonda talks about it like just another one comedy.

Jane Fonda is still acting (Monster In Law) but is also an active blogger, and Tweeter! If you want to know more about her very full life, ensure you read her autobiography 'My Life So Far', and not any of the many unauthorised biographies. 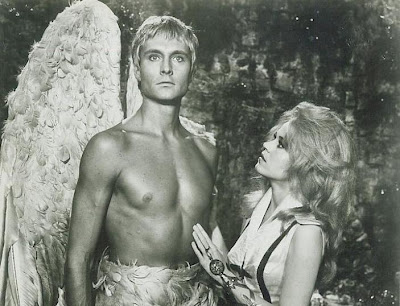 Barbarella's main ally is Pygar, a blind angel, an ornithanthrope (part man, part bird). He's trapped in the Labyrinth that surrounds the city of Sogo, because he's lost the will to fly. Like Barbarella, he's sexually attractive but also naive to the evil forces of the City of Night. 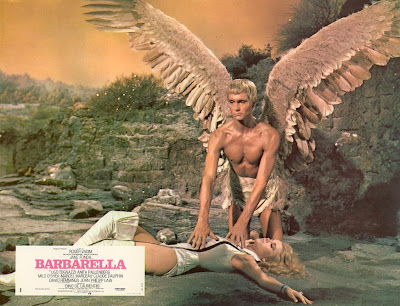 John Phillip Law doesn't overplay Pygar's blindness or his innocence. He spends the whole film dressed only in a feathery loincloth and a huge pair of wings (a heavy attachment that could actually flap). Law was cast while shooting Hurry Sundown with Fonda, after a string of supporting roles in Hollywood. Immediately after Barbarella, Dino De Laurentiis cast him as another comic strip character, Italian this time, as the lead in Mario Bava's Danger: Diabolik. Apart from Barbarella and Diabolik, he's best remembered as Sinbad in Ray Harryhausen's The Golden Voyage of Sinbad. His acting career lasted till the very end, when he sadly passed away last year. 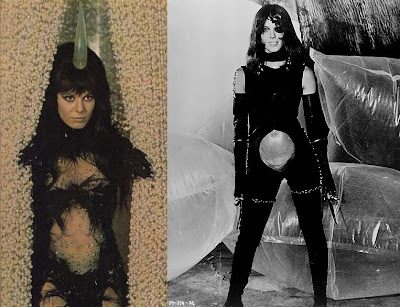 The Great Tyrant rules the city of Sogo with a leather glove. Her citizens are dedicated to committing evil acts for sexual and violent pleasure, feeding the Mathmos with negative energy that powers the city. A very green source of energy, if you think about it. Her Black Guards (made only of leather) suppress any opposition to her rule. She likes to disguise herself as an ordinary citizen and 'play' with her subjects. She also has a fondness for doubling up words, calling Barbarella "Pretty-Pretty".

Anita Pallenberg's performance sounds better than it looks, even though her outfits are just as seductive and spectacular as Barbarella. Pallenberg famously had her voice overdubbed by another actress, who makes her sound sensual, suggestive and far more expressive. One of the few good articles ever written about the film appeared in Video Watchdog #23, a review of the laserdisc edition. Italian movie expert Tim Lucas named the voice artist as Fenella Fielding (the villainess in Carry on Screaming), so I doubt that it was the similar-sounding Joan Greenwood, who is credited on IMDB.

Pallenberg's other famous role was as Mick Jagger's girlfriend in Performance, reflecting her famous dalliances with the members of the Rolling Stones. Never serious about movies, she's now a fashion designer. 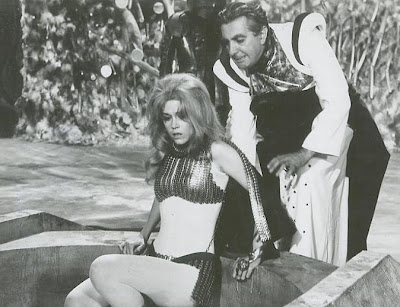 The Black Queen's right hand man (here he is, putting his right hand to good use) is the Concierge. He dishes out extra special punishments and tortures to the most difficult of the Great Tyrant's enemies. His specialties range from the high-tech Excessive Machine (a musical prison that lethally amplifies orgasms) to the good old-fashioned whip. He can be recognised from his cummerbund that looks like the Sydney Opera House! 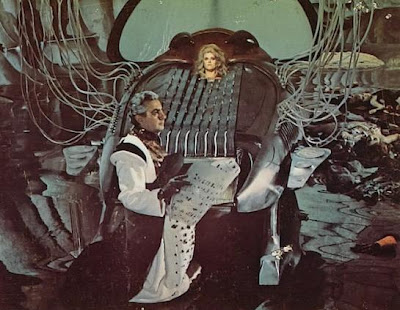 The Concierge is played by the villainous-looking Milo O'Shea, an esteemed Irish actor who made his name on the stage and in high-powered dramatic roles, like the adaption of James Joyce's Ulysses, but ended up being well-known for comedy on TV and film (like the inspector in Theatre of Blood). He initially underplays his villainous role, but easily hits the heights when he needs to.

O'Shea recreated the role, years later, in the video album Arena for 80s pop band sensation Duran Duran. A specially re-edited compilation of the band's promotional videos, supplemented by specially shot linking material. Clips from the film were also used in this moneyspinning, straight-to-video extravaganza directed by Russell Mulcahy (Highlander, Razorback) who shot many of the bands most famous and expensive videos. 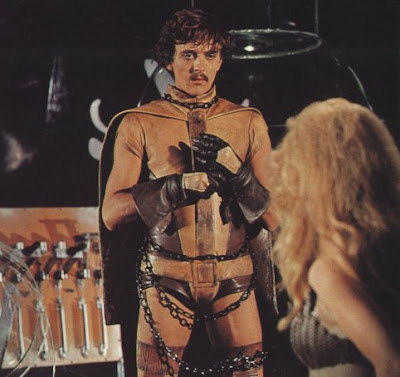 Dildano hides in the bowels of Sogo, plotting a revolution against the Black Queen, while not quite having enough resources or organisational skills to pull it off. He's passionate about his cause, but inept, forgetful and accident-prone. At least he knows how to make love the new-fashioned way... 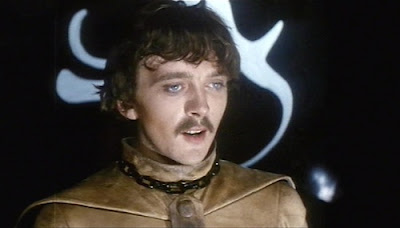 David Hemmings was a late addition to the cast, when a key comedy scene was reshot (more about that in my forthcoming article on missing scenes). At the time, Hemmings was internationally famous from his role in Blow Up. But after a spate of starring roles, he shifted into directing, including a movie adaption of James Herbert's The Survivor (1981), and then many TV episodes (all on film), including The A-Team, Airwolf (in which he also starred in the pilot as Airwolf's creator), Magnum P.I. and Quantum Leap. He ended his career by returning to acting, appearing in Gladiator, and The League of Extraordinary Gentleman, before passing away in 2003. 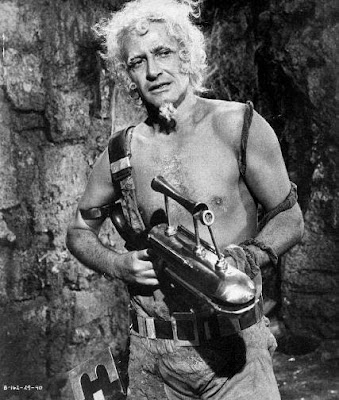 Professor Ping is the unofficial leader and advisor in the Labyrinth, cheerfully helping the exiled as they disintegrate into nothing, or integrate with the rock walls of the maze. While brainy enough to fix Barbarella's spaceship, it takes him a while to deduce that she's of female origin...

Bizarrely, it's a verbose role for the world's most famous ever mime, Marcel Marceau. He had a brief spate of speaking roles in movies, including William Castle's Shanks. and Mel Brooks' Silent Movie! Ironically, Marceau is dubbed by another actor here, I think it sounds like the versatile voice actor Robert Rietty, or maybe Ping lookalike Geoffrey Bayldon (Catweazle, Asylum). 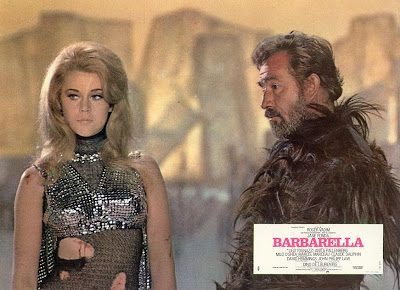 The Catchman is a hairy wanderer of the ice and forests of Weir, the snowy wilderness not far from Sogo. The habitat shows that Planet 16 isn't one of these Star Wars planets that has the same climate all over (a scientifically inaccurate whimsical throwback to Flash Gordon's Universe). The ice sheet contrasts with the balmy and arid labyrinth, hot enough to grow orchids. Here Mark Hand nets roaming wild children to provide unwilling slaves for Sogo. He mentions this all very calmy as he's chatting up Barbarella. He's also not great at repairing spaceships, though his self-propelled sailboat is still running smoothly.

Ugo Tognazzi plays this cameo role, in a cast that mixed Italian and French actors with English and American. Again he's an actor who could ably play drama and comedy. The only other film I've seen him in was the original French movie of La Cage Aux Folles, where he played the bisexual lead, a role replayed by Robin Willams in The Birdcage.

The President of Earth (Claude Dauphin)

Finally Dianthus, the President of Earth, gives Barbarella her mission via a video screen communicator at the start of the story. He's enamoured with Barbarella and looking forward to meeting her in the flesh, though not worried enough about her safety to spare her any assistance (like his own security force) for the dangerous mission. What he says goes, but it doesn't always make sense.

The last star in our line-up was the celebrated French actor, Claude Dauphin (Grand Prix, Phantom of the Rue Morgue). I'm assuming that his performance as the Earth President was dubbed into English by another actor, despite his many international roles. He's now buried in the Pere Lachaise cemetery in the outskirts of Paris.

Of all the above actors, only Fonda, O'Shea and Pallenberg are still around. Lower down the cast, the credits are still incomplete for the many actors who dubbed the film for the English-language version. Like who did Barbarella's spaceship computer Alphy? Or the cool calming voices of the Chamber of Ultimate Solution - the forerunner of Futurama's suicide booth?

My next article about Barbarella will be an illustrated guide to her many costume-changes, a running gag throughout the film.

Part 1: My review and overview of the Barbarella phenomenon