Looking back along my shelf of 1970s' movie mags, here's some choice images and adverts... 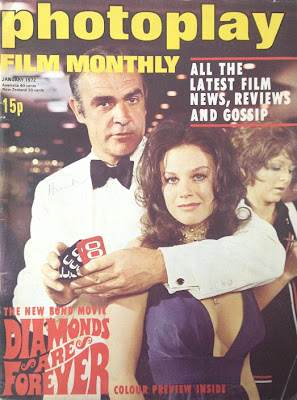 
Tom Baker was playing eccentrics and downright baddies like Rasputin (and the monster mutant man in The Mutants) before he played The Doctor. Here he is in Nicholas and Alexandra, which led to his being cast as Doctor Who. The BBC producers were unsure of his acting range and, luckily, this film was playing in London at the time. They went to see it and cast him as a result. An expensive showreel!


Hammer Films scored the biggest British box office hit of 1971. Not with Dracula, not Frankenstein, not lesbian vampires... but a TV adaption of On The Buses. This full page advert, on the inside front cover, is a taditional way of rubbing it in...

Films and Filming gave A Clockwork Orange a huge photo-article leading into their review. The back cover ran the full-page advert for the initial London release.