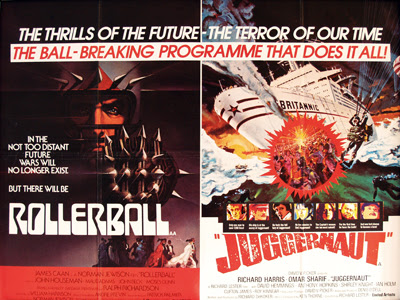 A trip to the cinema doesn't change drastically from decade to decade - pay for a ticket, overpay for junk food and stare at a wall for a few hours. But now it's forty years since my frequent movie-going began, and it was quite a different ritual.

As a child in the 1960s, I was taken to see a movie as an occasional treat, but my appetite became so voracious that, when I was old enough (13 or 14), I went on my own to the local cinemas. A lot. Between 1973 and 1980, I went weekly, sometimes more often. I also went up to London on my own to catch the latest films on even bigger screens. 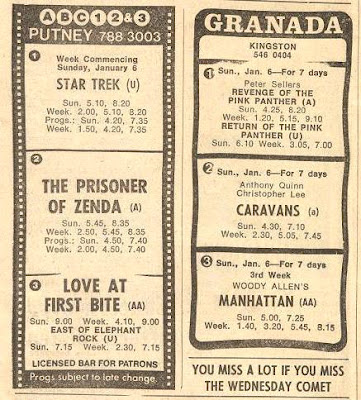 At the time, Britain had to wait several months for the US to finish with their prints of the movie. This often meant that we'd not see major films until the year after they premiered. As well as that delay, London had the opportunity to show new films exclusively for several weeks. With bigger screens and higher prices, it was presumably another chance for word of mouth and press reviews to drum up anticipation around the country. Or it could have been that there weren't enough prints to open everywhere at the same time. The London cinema listings were in national newspapers and the London evening papers.

Then new movies would open in different towns on different weeks, being held over for longer if they did well. I'd check other nearby towns to see if different films were playing. Saturday was when the local paper printed adverts for what was showing in the area, along with screening times. As the cutting above mentions, the programme changed every Sunday. For me it was the first page I'd look at in the the weekend paper. It was also the only way of knowing what films were playing.

At the time, only the biggest movies would get adverts on television. But most new films would have adverts on local radio. Made up of quotes and music from the soundtrack, with a deep, movie guy voice emphasising the taglines from the posters. ("The lucky ones died first!"). I've made a YouTube playlist of the best radio movie ads from the late 70s and early 80s. Many are in stereo - which was still a novelty on radio at the time.

I've little hard proof, but I think that the price for children was about 50p a ticket, and £1 for the over sixteens. By the end of the decade it was definitely £1.40 for an adult ticket at my local cinema. 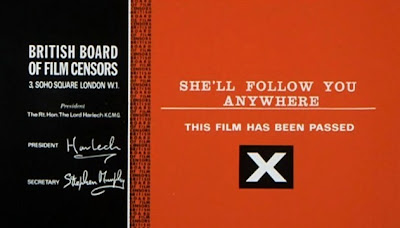 I'm relying on this page on Wikipedia - from 1970 to 1982, cinema certification was U, A, AA and X, which is certainly how I remember defining what I watched. The Rocky Horror Picture Show, Blazing Saddles and Young Frankenstein were 'AA', The Omen and The Exorcist were 'X', and incredibly Jaws was 'A'. Here's what they stood for...

'U' certificate was open to everyone.

'A' certificate wasn't recommended for under 14s (but we were let in anyway. But before 1970, in many areas, children had to be accompanied by an adult).

'AA' meant that under 14s weren't allowed in (these were roughly the equivalent of American 'R' certificates - violence and swearing but no explicit sex scenes).

'X' certificates were for over 18s only (before 1970. it was only restricted to over-16s), but they were still censored, cut for extreme violence.

As a tall teenager, I played a moneysaving game. I'd pay one week as an adult to see an 'X' film, then be cheeky enough the next week to ask for half-price (because I was under 16). I soon moved up to the right age for 'AA' films, but wasn't supposed to see 'X' certificates until 1979. If I'd agreed to that, I'd have missed the chance to see Carrie, Tower of Evil, Suspiria, Death Race 2000 and many more, so I pretended to be older... 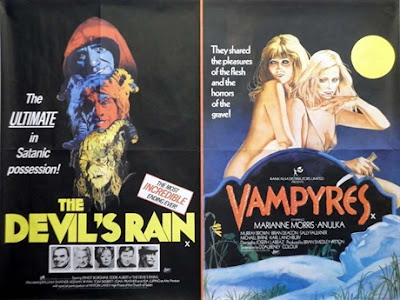 Throughout the 1970s, local cinemas were still showing double-bills, two full-length films, whether or not they were a suitable pairing.

So, for the price of one ticket, everyone could get three or four-hours of entertainment. Sometimes, I would stay and watch everything through twice - four films in a row. Most of the time, local cinemas didn't have 'separate showings' or booked seats (like they did in the central London cinemas). You turned up when you wanted, you could even go in halfway through. Rather than hang around an hour for the next performance, I made the mistake of going in late, when I saw Jaws for the first time. Then I then saw the first half, and watched it through to the end again. 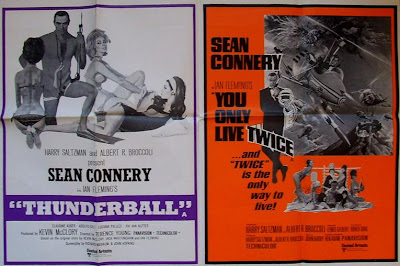 Many big films kept on making money with rapid re-releases, especially popular series like Planet of the Apes, Pink Panther and James Bond films. They made so much that TV couldn't afford to show recent films until years after they first appeared in cinemas. Double-bill re-releases were a great way of catching up on films that I'd missed and a chance to rewatch favourites. The order I saw them in was of course quite random. For insatnce, I started with the last Planet of the Apes film... 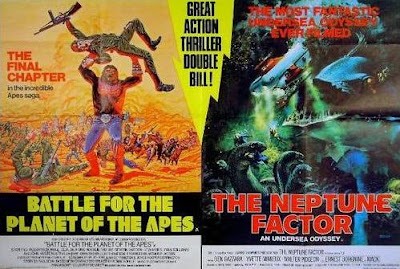 Queues to get in were longer in the evenings, especially at weekends. It was first come, first served. If there weren't enough seats, you'd have to wait till the next showing. Several ushers had to maintain traffic control and scout for empty seats during screenings, pointing torches at the floor to show us the where the steps were.

In between the support and the main feature, there'd be adverts and trailers. An experience approximated by Tarantino's Grindhouse (2007). The support might be a re-run that was a year or two old, usually with the same certificate. Or it might have been specifically made as a second feature! We'd also see American TV movies, that hadn't been shown in Britain yet - like The Savage Bees. In terms of production values, there was only a thin blurry line between low-budget feature films and TV movies. 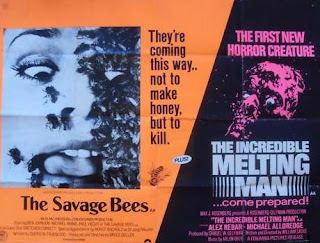 Through the decade, the double-bills became rarer - more and more blockbuster movies like Jaws and The Towering Inferno didn't need support films, but the tradition of having a 'supporting feature' remained. Specially-made short films and documentaries, little more than 25 minutes of filler, like travelogues, were shown instead. Few were memorable, except Bob Godfrey's Great (1975, a bawdy, musical, animated story of Isambard Brunel) and Leonard Rossiter as Le Petomagne (1979, based on the true story of a French stage entertainer who could fart musically). With horror films, there was a brief spate of weird, adult short films. I remember a Basil Brush presenter turning up half-naked in one about a sacrifice to Satan! 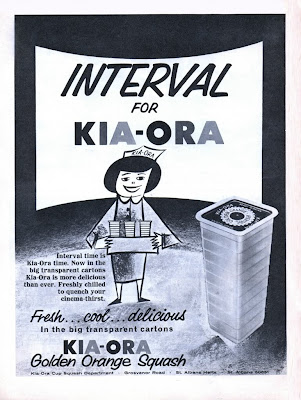 Between the support and the main film, there'd be diabolical local adverts, then slicker adverts (usually for alcohol or cigarettes - the Gordon's Gin music became a hit in its own right), then trailers for coming attractions.

Incidentally, smoking was still allowed in most cinemas, ashtrays built into the arms of every seat (but nowhere to put your drinks or popcorn). Smokers were eventually pushed to one side of the cinema (the right). But if the seats on the left filled up, you had to sit with the smokers! 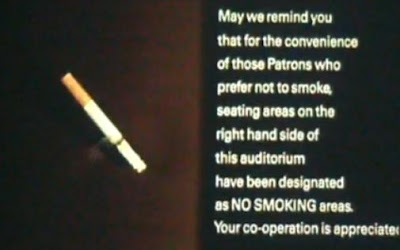 Long 'event' movies, like Ben-Hur, might not get a supporting feature. Though even 2001 - A Space Odyssey (on re-release) started off with a Tom And Jerry cartoon (they were in space, of course). With these epic running times, there'd be a break halfway through the film. I still remember exactly where they stopped Chitty Chitty Bang Bang and The Towering Inferno, both with cliffhangers and groans from the audience.

Waiting for the film to start, you might get music played, but were often sitting in silence listening to the projectionist rewinding the reels for the next performance. You could take the long walk down to the front and get a warm Kia-ora from the usher or a melty ice cream, or hike back down to the foyer for more Revels, as long as you still had your torn ticket stub to get back in.

If you were very lucky, there would be some sort of light display to keep your brain alive. The multi-coloured oil wheel projected over the curtains at Wimbledon Odeon once kept me amused for over half an hour.

The wait between films could get ridiculous. Presumably. the manager had to stick to the published times placed in the local newspapers, before they actually knew the exact running times. 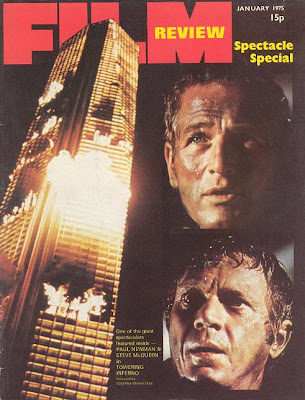 Magazines sold at the ticket booth passed the time, though there was barely enough light to read them. There was Film Review or Photoplay magazine, and sometimes a special brochure for the main film. Japan still makes these, with high quality colour photos and behind the scenes info, they're very collectable.

By the end of the decade, brochures at local cinemas gave way to tie-in magazines and foldout poster mags, which you could buy at any newsagent. Star Wars was one of the first films to have such a tie-in (but you could still get the brochures in the big London cinemas). 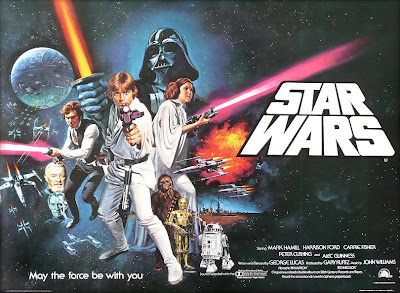 Everything (except in a few of the biggest cinemas) was shown on 35mm film reels, in either 1.85 or 2.35 aspect ratios.

As I remember, the changeover between film reels was every twenty minutes. The print would visibly get more scratchy, before the circular marks scratched into the top right corner of the picture appeared (once as a warning, the second as a cue) and the sound might glitch out at the moment of changeover. Distributors would try and divide up reels so that there was no music and a gap between dialogue at the end of each reel. There might be a momentary blackout if the projectionist was late switching over.

Censor cuts would have been made, physically, to each print. Because the projector bulb shone behind a different frame to where the sound pick-up was. If a section of film was cut out, the sound that was removed would differ by half a second. You could often tell where the censor cuts were because of the mismatched audio, besides a blatant jump in continuity.

To see a major new film without having to wait, I'd go up to London, where some cinemas even had multichannel or stereo audio, 70mm prints or even floor-shaking Sensurround. A chance to see them as soon as they'd opened in this country, Star Wars, Close Encounters of the Third Kind, Superman - the Movie, Alien, Battlestar Galactica, The Black Hole, Apocalypse Now in six channel stereo... I have the brochures to prove it.

Soon, I'll be looking back in detail at these, my local cinemas at this time, and what's happened to them since. Also, how you can travel back in time to see how your favourite cinemas looked...