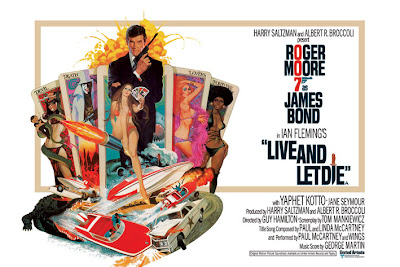 A different Bond  movie in many ways...

After too many wincingly awful moments in Roger Moore's James Bond movies, it's easy to write off all his films as 007. But the first can be seen as an improvement over Sean Connery's last (Diamonds Are Forever). Live and Let Die is Moore's toughest portrayal of the character. 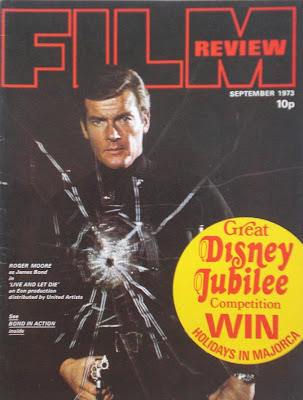 At the time he also presented a younger action hero than Connery, looking great head-to-toe in black, and agreeing to some of his own stunts (getting too close to alligators and driving a speeding speedboat). It didn't take him long to insist on leaving the stunts to the stuntmen... 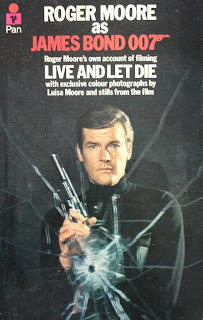 This is a different Bond in many other ways - Moore's diary of the film's production reveals that the producers avoided situations established for Connery in an effort to avoid too many close comparisons. Gone are the flirting with Moneypenny and the briefing in M's office. There's no gadget show with Q (a rare non-appearance) and few gadgets. This is a stripped down Bond, an agent with a gun... OK, and a hang glider.

Avoiding the dodgy special effects of Diamonds Are Forever's space satellite, the spectacular action scenes are staged for real. Live alligators, car stunts on the streets of Manhattan, an epic speedboat chase (over land and water), and of course the double-decker bus. 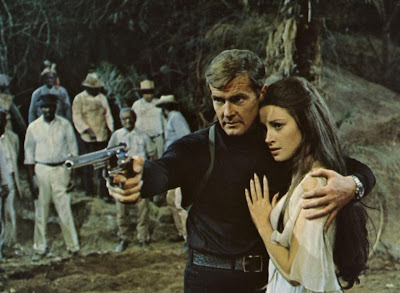 A unique aspect is that here Bond tangles with the supernatural. The tarot cards actually predict, and voodoo curses panic their victims and can even resurrect the dead... The graveyard scenes are genuinely spooky, with several shock moments, culminating in a fantastic, early stage effect from Rick Baker, who at the time was a specialist in prosthetic make-up for black actors.

The producers wanted to continue the appeal to the American market (Diamonds Are Forever had mainly been shot around Las Vegas) and needed another story in a US location, but Ian Fleming's 1954 novel of Live And Let Die was racist in its portrayal of the many black American and Caribbean characters.

Not wanting to offend any of their potential US audience, the producers hired an American scriptwriter, Tom Mankievicz. He delivered a story with realistic black characters, and humour that mostly works at Bond's expense, ("Hi Jim. What's happening baby?"). But the underlying subtext of the story is still a disaster - all black people are part of the same huge crime conspiracy! 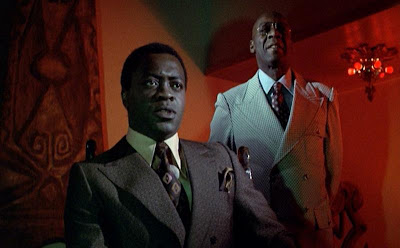 Yaphet Kotto makes the most of this starring role to make a believable baddie, providing tension and a very real threat to Bond's invulnerability. He makes few of the stupid mistakes other villains have, with a scheme that's all too plausible (flooding New York with heroin to increase demand). At his side is the towering Tee-Hee, a largely silent role for Julius Harris, soon to play the joking, bloody, dictator Idi Amin. A typical Bond henchman, he has a metal arm.

Geoffrey Holder pretty much plays a Joker, a grinning voodoo magician. The actor was also a dancer and did the choreography, his every move is a scene-stealer. I love the way he starts burning Solitaire's cards in the background, and his early morning greeting, "It's going to be a beautiful day", would make a great alarm clock. 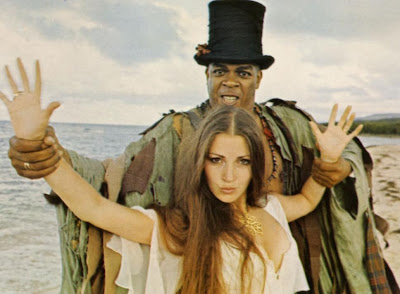 David Hedison (The Fly, The Lost World, Voyage to the Bottom of the Sea) is a great Felix Leiter (Bond's CIA connection), one of the few to play the character twice. He looks the part and gets big laughs with his fuming exasperation. I'd even say that Jane Seymour is good here, though her character is very passive compared to most other Bond 'girls'. Similarly Gloria Hendry is too clumsy to convince as a CIA operative, but shows more range than Seymour, in a fairly brief role. An earlier choice to play Solitaire was Diana Ross, with a possible American actor for Bond - they'd considered Burt Reynolds!

If James Bond had been black, this movie would be blaxploitation, but that's the genre this film is tapping into. It's like a glossy version of Shaft, one man taking on a black underworld. And Shaft is a black version of Bond. That makes these two films an interesting double-bill.


As Mr Big has so many henchman, the production needed a large number of black stunt performers, who at the time weren't allowed into the Hollywood stunt associations! (During the making of Shaft, only two years earlier, white stuntmen had to 'black up'). This is spelt out in the behind-the-scenes featurettes for both films. By the time of Live and Let Die, they'd had to form their own separate association. 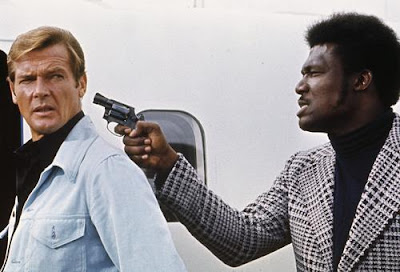 The obvious stereotype in the movie is a white Florida sheriff (Clifton James) who insists on addressing black suspects as 'boy'. But he's played for laughs and dominates several scenes, proving so popular he briefly appeared in the next Bond film. His racist comments pervade several comedy moments, inviting the audience to laugh with him and not at his attitudes.

The premise shares the paranoia of, for instance, the Fu Manchu movies still being made in Britain throughout the 1960s, where a powerful, non-caucasian villain has managed to unite his race in a common cause. Every Chinese person in Fu Manchu stories works for Fu Manchu's evil organisation. Similarly, every black person that Bond meets is a suspect. Taxi drivers, shop assistants, waiters... they all work for Mr Big. Even the shoeshine guy has a secret transmitter! From Harlem to Florida to (a little island that's a bit like...) Haiti. 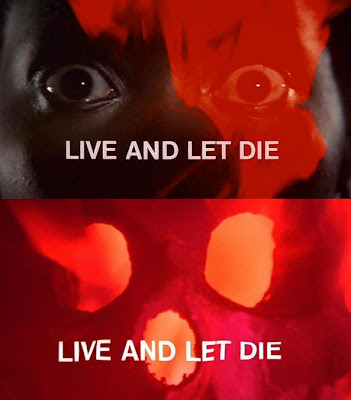 More startling is the powerful title sequence cut, using Wings' theme song. There are repeated jumpcuts from a close-up of a black actress match-cut to a burning death's head. I mean, it foreshadows the story and all, but the symbolism is a little heavy-handed...

As well as a case study in changing attitudes, it's also fast-paced entertainment. The impressive and frequent stuntwork are from a time when it was hard to fake. You either crash the car in the right place, or you get hurt and they have to wheel out a replica car. 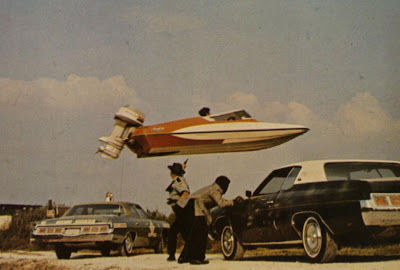 The speedboat jump is ridiculously dangerous (the second jump goes slightly wrong and ends up running into the bank, out of control), but I'm more impressed by the way they skim across the road, narrowly avoid cars and slide back into the water, all in a single take. The superb speedboat sequence was filmed around New Orleans' canals and levees. All this time I'd thought it was shot in the Florida Everglades, associating it with the alligator farm (which was actually a crocodile farm filmed in Jamaica). Shooting with large, live crocs was extremely dangerous (again I'd assumed that they filmed Roger Moore in a safe, empty replica set, but they didn't).

I love how organic the Bond films are and were. The action scenes are suggested by the best of what the locations have to offer. The producers travel the world with the scriptwriter in search of scenes! They went to New Orleans specifically to scout for the funeral scene and then looked around, found the levees, and invented the boat chase!

Mr Big's underground lair feels a little cramped for a Bond villain (compared to the hollow volcano and the oil rig) and this film very much misses Ken Adam's production design (he was up to his eyeballs in Kubrick's midnight phonecalls for Barry Lyndon at the time). 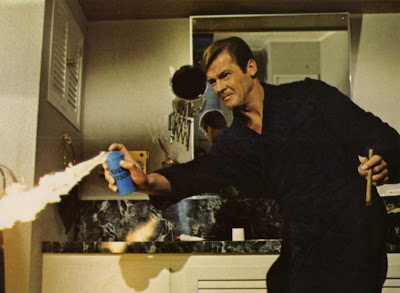 Another change of formula is George Martin composing the soundtrack. While any Bond film without John Barry is at a disadvantage, I think this is a terrific score, suitable for the film and as standalone music. Barry's return for the next Bond, The Man With The Golden Gun even felt lacklustre and cliched in comparison. I'm sorry that Martin didn't compose many more soundtracks, but of course he's always been extremely in demand.

There aren't many films where I look forward to every scene, every stunt, the soundtrack, the cast, the locations. It's certainly the only Roger Moore where I don't need to skip scenes out of sheer embarrassment. Well, apart from the redneck sheriff... 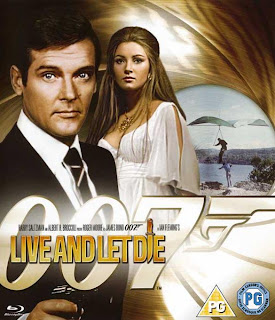 I watched the UK blu-ray release, which like all the Bond films is packed with extras old and new. The most astonishing are the sequence of five takes where Ross Kananga, the crocodile farm owner, tries to walk across the backs of the crocs without them biting his feet off... 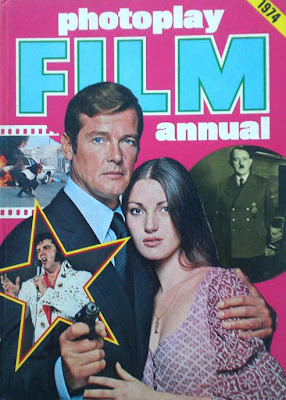 Lastly, some merchandise and publicity material from the film's initial release... 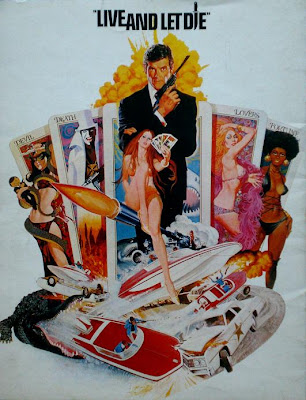 There'd be a cinema brochure on sale when you went to see the film. Full of trivia and colour photos... 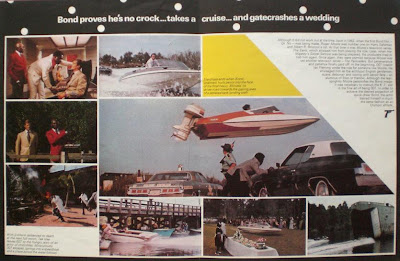 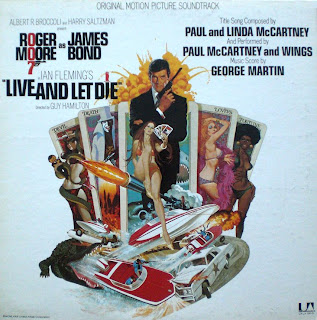 This soundtrack album contained only one record, but still had a foldout sleeve revealing this great photo-spread... 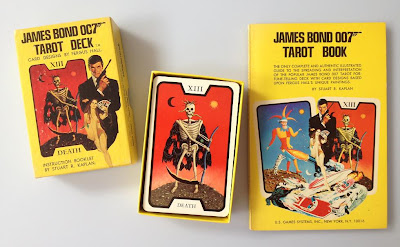 I found this tarot card 'game' in a magic shop Disneyworld, a facsimile of the deck used by Solitaire, specially designed by Fergus Hall for the film. My only complaint was that the design on the back of the cards was red in the film (why was she using '007' tarot cards anyway?). The deck came with a book about tarot and a foldout sheet showing the traditional ten-spread for fortune-telling! 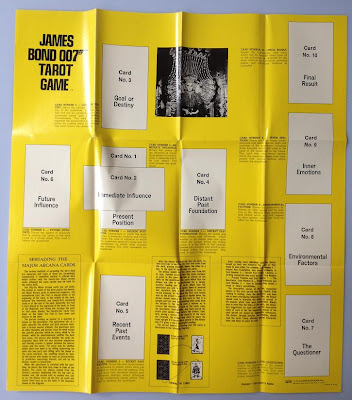 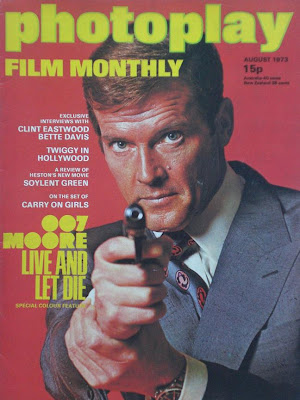 Besides the usual articles in Photoplay and Film Review, the Sunday supplements had to add their own angles. The following were reprinted in the Sunday Times Magazine (I think), sketches by Syd Cain, the production designer. 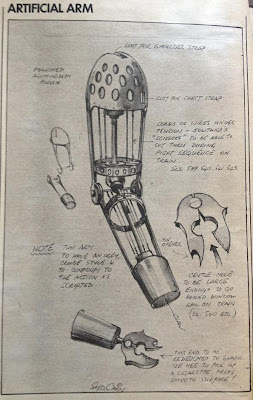 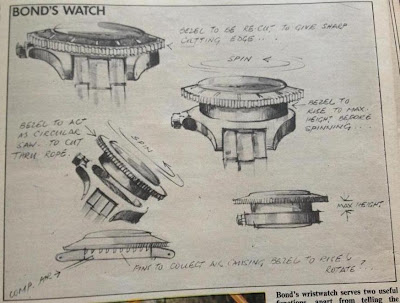 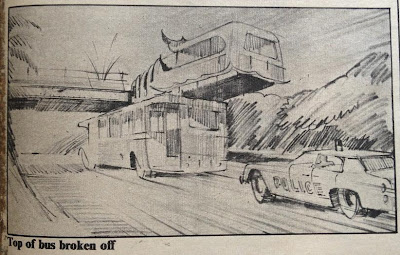 These cuttings have been in one of my scrapbook for forty years!