SAMSARA (2009) - worthy of BARAKA and KOYAANISQATSI 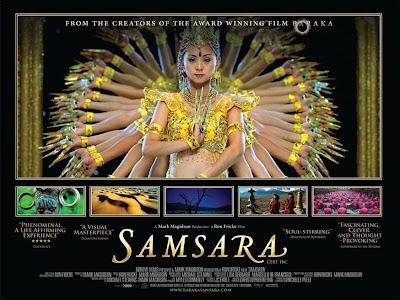 If you've seen Baraka (1992) or Koyaanisqatsi (1983), my job of describing Samsara to you would be much easier.

Most of what I know about these amazing films is from DVD extras and the issues of American Cinematographer that covered them. Officially, Ron Fricke was the cameraman on Koyaanisqatsi which was directed by Godfrey Reggio. In reality it was an experimental collaboration between them. Reggio wanting to communicate just through images and Fricke's eye for the amazing, combined with his innovative use and development of mobile time-lapse cinematography. Koyaanisqatsi shows us the incredible. Together with the hypnotic effects of Philip Glass's soundtrack (which also interacted with the editing and structure of the scenes), it also inspires a contemplation of, well, life on this planet.

Fricke hasn't collaborated with Reggio since, but both continues to direct similar 'non-narrative' movies and short films ever since. Reggio with two more 'Qatsis', Powaqqatsi looking more at the people around the world, Naqoyqatsi at our digital future. Fricke most notably made the epic Baraka - a glorious look at the natural world.

But neither man has since achieved the same hard look at the world as Koyaanisqatsi. Though Samsara comes close by including themes of industry, colossal scales of waste and even disposable people - androids. As well as the astonishing use of Fricke's trademark motion-control timelapse camerawork, but this time for night-time scenes, with stars revolving in the sky and statues lit only by moonlight.

The mix of natural wonder and the never-ending consumption of complex manufactured goods, not to mention animal products, makes for many memorable points without using sledgehammer tactics. The camera stands back, without pointed close-ups, allowing the viewer to pick out their own details. Fricke continues to include his slow-motion 'portraits' of people and couples from around the world. Most touchingly in the section on the aftermath of Hurricane Katrina.

Samsara prompts us to think about many different aspects of the world, I've not mentioned them all, and very different trains of thought to those triggered by advertising, random TV or a YouTube homepage.

It's like drifting around the world in a balloon with a telescope. A mystery tour of amazing places I never knew existed. Like Koyaanisqatsi, the point isn't to constantly pinpoint where and what you're seeing, but to watch what's happening.

Afterwards, the making-of documentary can tell the story of the five years of collecting amazing footage on huge 65mm cameras, around 25 different countries, in some inaccessible locations and very privileged vantage points. Many directors spend extra effort on their establishing or opening scenes. Samsara feels like a feature compilation made up of those.

This amazing shot of a temple reveals dozens of others in a surreal, smooth, vertical reveal, presumably filmed from a balloon. The number of temples sitting so closely together in a lush green setting honestly looked too good to be true. We needed to double-check our eyes for CG trickery. But that's not how these films are made.

Samsara is further guided by its imagery by being edited without any reference to music. Where Koyaanisqatsi was partly cut to music, Samsara was 'silently edited', each shot allowed to run its course before giving way to the next. Only then, like standard movie-making, was a completed 'cut' given to the musicians to score.

The ethereal music for Samsara is by Michael Stearns (who composed for Fricke's Baraka and Chronos), Lisa Gerrard and Marcello De Francisci. Hearing them talk, I was touched by the fact that I'd first heard Gerrard's singing (wailing?, lamenting?) thirty years ago when she was with ambient gothic group Dead Can Dance. It was like reuniting with an old friend! 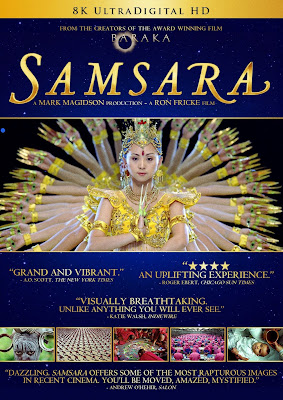 Samsara deserves seeing on as big a screen as possible, showing in most theatres on 4k digital. Blu-ray is obviously the next avenue you should explore. The blu-ray image is of course 1080 by 1920, the '8K' referenced on the cover is the resolution width that the film was originally scanned at.

Also, don't be put off by this being exiled to the documentary section. There's no voice-over, no talking heads. It's in a genre all of its own.

A thorough interview with Ron Fricke and co-writer/producer Mark Magidson about their adventures making Samsara, here on Horror Cult Films.

My look at Koyaanisqatsi is here.