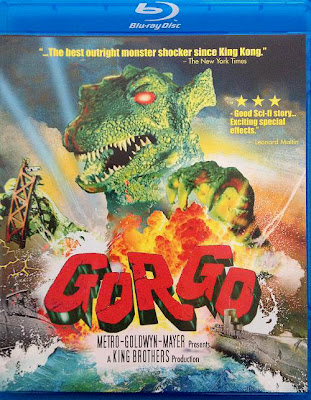 This excellent restoration, from newly-discovered 35mm film elements in an MGM vault, finally gives us a home video release of Gorgo that surpasses my experience of it on TV! Up until now, I've been tracking the DVD releases and been repeatedly disappointed by the muted colours of this wildly colourful film.

I've written at length about this very British giant monster movie, both for G-Fan magazine, and again in this blog (a review of the film and a look at the earlier DVDs), so here I'll just concentrate on the new VCI restoration. 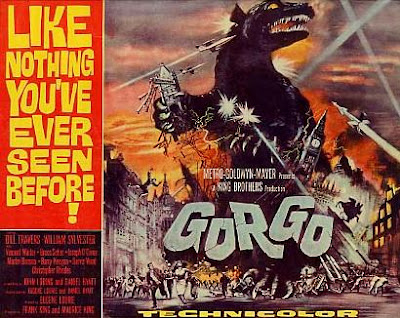 It's been a long, long wait to see the Technicolor wonder of Gorgo decently represented on home video. This giant monster movie was one of the first in colour (the two earlier Godzilla movies were black-and-white) and may have been boasting the fact by using too much colour! As Gorgo tramples London, setting it on fire, red smoke becomes a vivid backdrop to the dinosaur's night-time raid. The volcano, the lights of the fairground and Gorgo's red eyes all thrive on properly saturated colours now. Not only has the colour been restored, but it hasn't been noticeably digitally tweaked - it's still as I remember, not a revised interpretation. 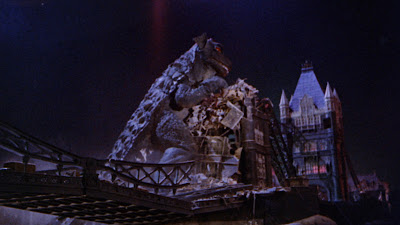 Film damage and tears has been dealt with, without too much digital enhancement. Of course, this sixty year-old film is still grainy and certainly isn't pin-sharp, but I'd only expect that of big budget, carefully-archived movies. The aspect ratio is 1.85, apparently how the US first saw it. This masks a little visual information off the top and bottom, notably cropping the action in the wonderful shot of Gorgo trampling Piccadilly Circus, but that's the only annoying moment. A good visual guide is how well the opening credits are framed, and here they look perfect at 1.85. I'd have prefered a 1.66 aspect, but for me it's a minor fault. 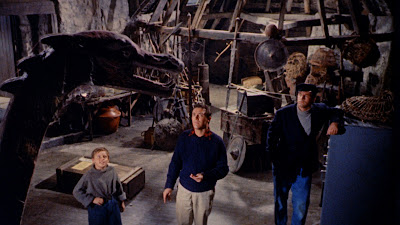 Regular murmurs from message boards and Twitter always assume Criterion is the best hope for a definitive home video release of their favourite films. But while it's true that Criterion spend a lot on their restorations, they barely represent sci-fi, horror or monster movies. They're into classic film, arthouse and world cinema. It's pointless holding out for a Criterion release of obscure horror movies, when so many smaller labels are totally dedicated to these genres. Here, VCI have restored Gorgo far better than I'd hoped, and I seriously doubt that Criterion could do a better job, mainly because better film elements may not exist. Let's also remember that Criterion releases are far more expensive. 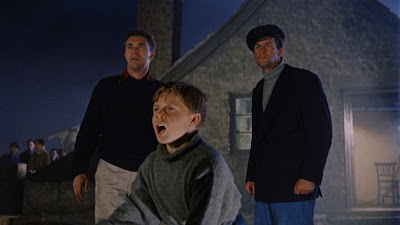 The last word is with DVD Beaver, who have posted high-res screengrabs from the blu-ray, some of which are included here, proving that this transfer bests the DVD and laserdisc releases by a mile.

The extras, included on both the DVD and blu-ray releases, are headed by a new documentary from Daniel Griffith (who put together the amazing feature-length making-of Twins of Evil), with additional looks at as many lobby cards, posters and press material as could be tracked down. You can also 'watch' the entire 'photo-novel', a French comic book entirely made up of screengrabs and speech balloons. 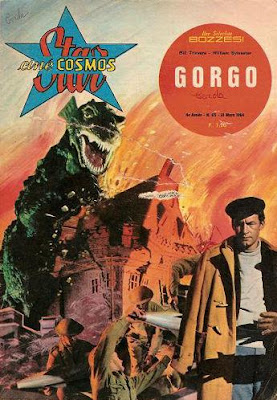 Some amazing photos have been unearthed - I was particularly pleased to see the behind-the-scenes shots of the Gorgo suit and it's workings. It seems every living lead has been followed up in search of material. The trailer is presented widescreen, and also looks in great shape. A selection of photos of Gorgo toys, model kits and resin sculpts are included. Another jewel is the music-and-effects track (the dialogue stripped away) enabling a better appreciation of Angelo Lavagnino's music and Gorgo's scary noises.

The blu-ray is not region-coded, making it playable in UK blu-rays as well. 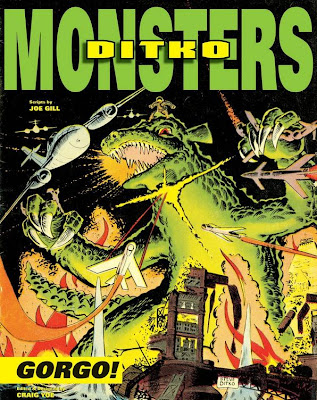 The new documentary mentions that Gorgo lived on with her own Charlton comic series for a while. Marvel Comics legend Steve Ditko is the reason that these have just been reprinted in a single volume. Further volumes include Black Hole favourite Konga, who also had a Charlton comic!