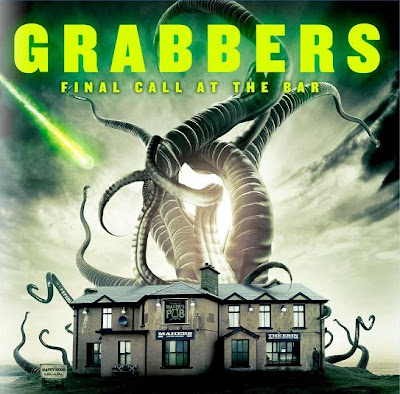 We watched this completely cold and it's already a favourite.

I prefer monster movies played for real, which this does. But its balanced with a healthy amount of humour while remaining respectful of the genre. Tremors and Lake Placid are two that got it right and Grabbers holds up in comparison, despite a lower budget.

From the beautifully subtle opening shot, which confirms that the special effects were in good hands, as well as a gentle echo of John Carpenter's The Thing, that also meant that the director knows his stuff...

A fishing trawler runs into trouble in the middle of the night. Already, we know that something inhuman and deadly is at large. 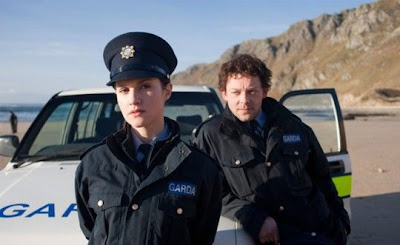 There's a slow build that gives time to establish the characters and the setting of a remote Irish island. Richard Coyle (Pusher, Franklyn) plays an alcoholic policeman, who's saddled with an overly keen sidekick from the city (Ruth Bradley, recently seen in Primeval). The local islanders are all a little eccentric, but no worse than a English marine biologist twit (Russell Tovey working very hard to breathe fresh life into a sci-fi cliche). 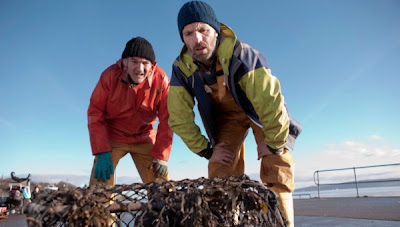 As clues start washing up onshore, in fishing baskets and on the beaches, the two police officers know trouble is brewing, but have no idea how big a problem they're facing... 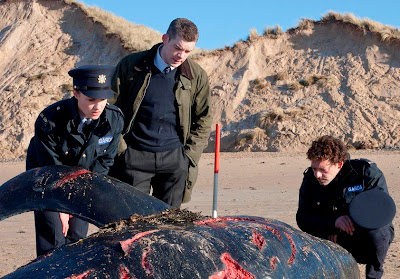 What I really love is that there's a new kind of monster and it looks fantastic. Well-realised, well-designed and disgustingly biological. Like Jaws it's not overused, and saved up for special occasions. It always gave me the creeps and would look good in a Cthulhu movie. But it's just a good old alien thingy from inner/outer space. The only way to beat it is to go down the pub and figure out what makes it tick...

In the extras, director Jon Wright admits that his homages are to 1980s monsters, rather than the pub-siege genre of the 1960s (as in Night of the Big Heat) which I feel is a missed opportunity, but there's plenty of fun 'quotes' to watch out for.

Well thought out, with likeable characters that you care about, Grabbers is rich, funny and suitably monstrous. It's out on DVD in the UK, but the blu-ray shows off the scenery, cinematography and special effects even better.


Most of the poster art I've seen only plays on the comedy angle and would have steered me away if I'd seen them beforehand. Worse still, the DVD cover (at the top) looks like a cheap, generic Asylum or Sy-Fy offering. This is more of a monster/horror film with a comedy element, so don't let it all put you off.