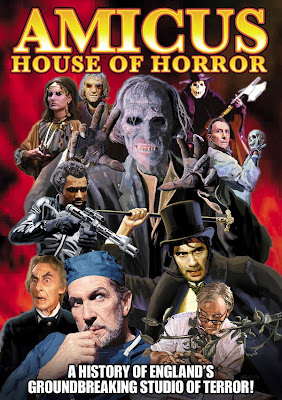 For British horror films of the 1960s and 1970s, Amicus Productions rivalled Hammer films by taking a different approach with considerable success. Amicus brought horror to mostly modern day settings, like the living rooms of The Skull, the film studios of Madhouse, the high-tech werewolf hunt of The Beast Must Die... They also monopolised on the 'portmanteau' horror, a film made up of short sharp shocks, held together by a linking story - Dr Terror's House of Horror's lead to the first EC Comics adaptions of Tales From The Crypt, Vault of Horror and beyond to Tales That Witness Madness and The Monster Club.

Strangely, the company started and ended with child-scary family adventures, from Dr Who and the Daleks to Warlords of Atlantis. Amicus made a lasting impression on several generations of filmgoers and late night TV horror fans.

On a limited budget, writer and director Derek Pykett has made dozens of interviews on home video around England. But looks like he was unable to pay for any expensive archive materials to portray a more complete story with behind the scenes footage, movie clips or old interviews. Instead he gives us some valuable time with many surviving cast and crew members who worked on the films.

I wish he'd spent a little more time on editing and deciding on a target audience. The running time is unnecessarily inflated by introducing many extremely familiar plots and people. Worse still, by repeating facts and introductions as if we've not been paying attention. His pieces to camera are also very downbeat, as he repeatedly reminds us who's dead, in stark contrast to the many chirpy interviewees who remember the good times they had while they colleagues were alive. 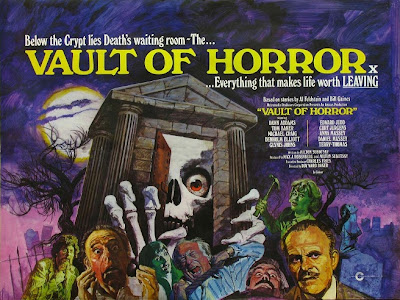 The variable sound levels also make this contrast with the flashy DVD extras that we're used to on special editions.

No-one else has got these interviews or even some of the interviewees that he has here. No one's bothered to go this far down the cast list and persuaded the directors and cameramen to talk about these almost forgotten films.

This could have been slicker, and a bigger budget could have pulled in better interviews and bigger names, Christopher Lee and Stephanie Beacham are absent. But there are no other Amicus documentaries out there anywhere! 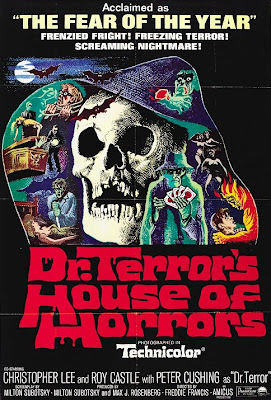 It starts a little confusingly by introducing Milton Subotsky and Max Rosenberg, the two producers who started Amicus. But then fast-forwards through the whole story of Amicus by telling us their entire life stories upto their deaths. Making me think the whole documentary was going to be a series of biographies all told in voiceover...

The style then settles down with a great remembrance from Milton Subotsky's widow who thankfully has great recall about his heyday. Then we get into the main meat of the programme, split over two discs, an exhaustive film-by-film account of the entire Amicus filmography, related by an impressive roster of surviving cast and crew members.

I was particularly pleased to see interviews with Geoffrey Bayldon (Asylum, Tales From The Crypt, The House That Dripped Blood), indeed he introduces it. Also a pleasure to see Angela Pleasence (a stark presence in From Beyond The Grave) who's still out there working!

Actors who only appeared in one scene in one Amicus film are also delightful, partly because someone else remembers their characters as vividly as I do. Angela Grant as Ian Hendry's girlfriend in Tales From The Crypt is famous (to me) because I've seen it so often, and the shocking scenes that she's in. It's surprising just how much insightful material can come from someone who worked with Amicus so briefly.

Some are character actors who were more famous for their non-horror roles, like Jeremy Kemp (Dr Terror's House of Horrors) who regularly appeared as German commanders. Kenny Lynch (also Dr Terror) and Geoffrey Davies (Vault of Horror, above) were far better known for light entertainment and will only otherwise be recognised by those who remember 1970s' TV.

Crew members include production designers, cameramen and a couple of directors, like Kevin Connor (From Beyond The Grave, The Land That Time Forgot) and Stephen Weeks (I, Monster). There are of course many other interviewees and even a couple of visits to filming locations. 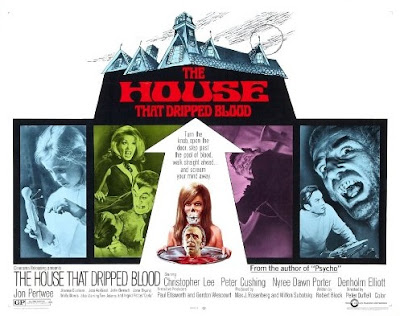 Director and voiceover Derek Pykett keeps appearing to fill in gaps in the timeline where he has no relevant interviewees, most annoyingly on my favourite, Tales From The Crypt, giving the first of a seemingly endless, dour reminder of how wonderful Peter Cushing was and reminding us that he's dead. I'll forgive him all this because Derek also wrote this invaluable paperback guide, British Horror Film Locations. 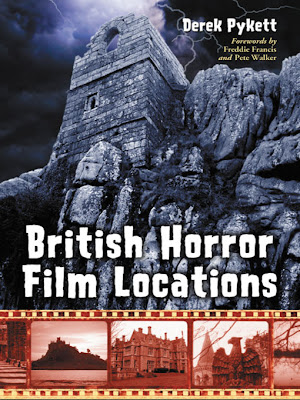 I won't forgive that Derek skips over the Amicus monster movies far too quickly, even though he's interviewed their director, Kevin Connor. The Land That Time Forgot, The People That Time Forgot, At The Earth's Core, and Warlords of Atlantis are scarcely covered. They were the few Amicus films that I saw at the cinema and indeed the only ones I was allowed to see at the time. They were also a large part of Amicus' success in the 1970s, and just as much a part of producer Milton Subotsky's love affair with fantastic literature.

So, after the extended run through most of the Amicus filmography, it then circles a little randomly for a while with another downbeat Cushing tribute and some leftover bits of interviews to try and sum up. 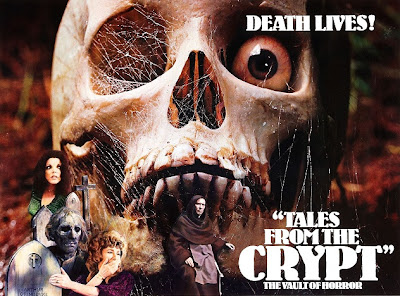 For enthusiasts who know these films and recognise these actors from relatively small roles, this is a treat. But it's a rough introduction to the subject, with not enough enticingly presented clips (just trailers) or thorough enough background, to please newcomers.

But there's more good stuff in the DVD extras! Also included are two rare archive interviews with Peter Cushing! The first is from 1990, and both are introduced by the interviewers as they are today. 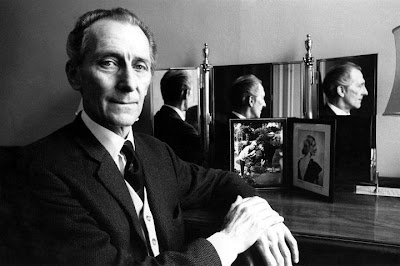 While many of us are more than aware of how the death of his wife severely affected him, it's rare to see Peter talking about it at any length. And rather than being overly sentimental, he remains composed, self-deprecating and even humorous about what was a disastrous and prolonged grieving process of nearly thirteen years! He admits he tried to kill himself. Too cowardly to throw himself into the sea, he ran back home and tried to bring on a heart attack by running up and down the stairs! Which is quite an admission, that he treats with a smile. To slowly get over Helen's death, he threw himself into work and said yes to any and all offers.

The second is a 1983 interview, with a young inexperienced interviewer who Peter politely but occasionally catches out. This was crucially filmed just at the end of his 13-year exile from the public. Perhaps it's Peter easing himself back into talking about things. This is a slightly more guarded interview, but reveals he actually doesn't like watching horror films! He prefers war, drama, comedy, westerns. Though he makes a point of gratefully acknowledging the horror fans who enjoy his work. He only watches his rushes but not his films.

Amicus: House of Horrors is only sold in the US, but the DVDs aren't region-coded. They can be bought direct from Oldies.com in the US, or you can easily get them via Amazon.co.uk, if you're in Britain. 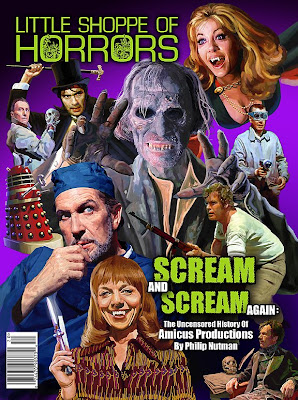 See many more of the classic Amicus movie posters here at The Wrong Side of the Art.