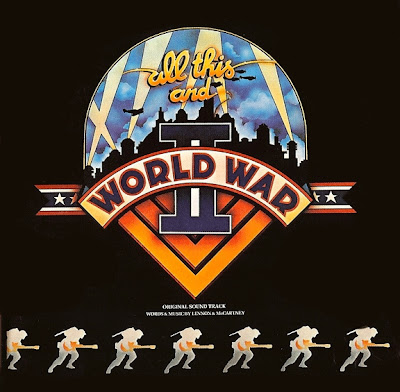 A 90-minute documentary feature attempting to cover the whole of World War II, all set to songs of The Beatles.

Not a completely crazy idea after the acclaimed documentary Buddy Can You Spare A Dime? (1975) had taken a similar approach to America's Great Depression. But closer comparison could be the That's Entertainment compilations that made use of studio archives to create new movies - the cinematic equivalent of a TV 'clip show'.

In the UK in 1977, I only knew the movie because of the vinyl double-album cluttering up the soundtrack section of the record shops. Being at school, I wasn't about to be tempted into the cinema for a history lesson, not that I ever noticed it playing anywhere locally. Ironically, this was around the same year that I'd stop studying history. At my school, the only way to learn about 20th century history was to take the 'A' level, which I didn't. Decades later, I decided to fill in some of the vast gaps in my education, particularly the World Wars, by watching two extensive documentary series (The World At War and The Great War). 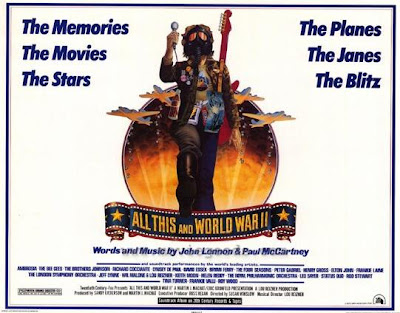 Despite a generous budget, All This and World War II wasn't at all popular, with no known home video release and only a few TV showings. Luckily a truncated version recently appeared on YouTube, otherwise I'd never have seen it. For this to get a DVD release would require a huge outlay for music rights from a wide range of record companies, not to mention clearance of the movie clips.

I was mainly curious about the music, all Beatles songs, but cover versions from a wide range of rockers. The results are far more successful than the hideous treatments trotted out in Sgt. Pepper's Lonely Hearts Club Band (which I narrowly avoided in 1978 and, again, only caught recently). So many good tunes murdered... it was a musical massacre.

Again, The Bee Gees are in there, but there are also great covers by Elton John (Lucy in the Sky with Diamonds), Helen Reddy (The Fool on the Hill), Bryan Ferry (She's Leaving Home), Jeff Lynne (of ELO), Tina Turner, Frankie Valli and many more! The soundtrack album made more money than the movie... 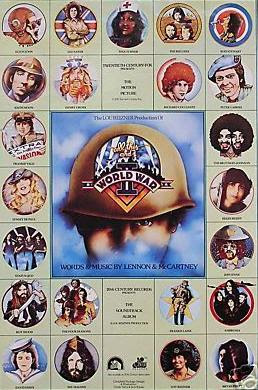 With a backdrop of Beatles' songs, the entire film is made up of newsreel and movie clips, at a time when music video had hardly started as a form. Synching footage to existing music was still a novelty or an interlude. The cover versions are given a cinematic boost by being backed by the London Symphony Orchestra.

The opening reel worked best for me, with the grim descent into war portrayed without commentary as Nazi Germany sweeps across Europe invading country after country, poignantly set to 'The Long And Winding road'. The editing complements both the music and lyrics, the choice of newsreel footage pertinent and often fascinating.

But after a great start, there's more and more use of spoken word, with Presidential speeches, lightweight interviews and movie stars enlisting. What I wasn't expecting was the extensive use of clips from wartime movies, blurring the difference between real and recreation. The cutting speed also slows down and the flow of music is interrupted. worse still by funny clips and an over-reliance on excitement from epic movies like Tora Tora Tora and The Longest Day. Hollywood spectacle and propaganda at odds with the reality of the war. I'm also very confused by the use of 'I Am The Walrus' over the attack on Pearl Harbor... 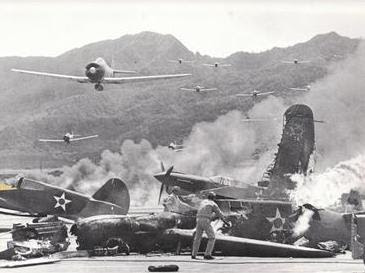 The lyrical juxtaposition could have been weightier. Simply portraying Hitler as a 'Fool on the Hill' is consistent with him being a figure of fun at the time, with most TV comedians. For the dictator to be used for comedy nowadays is seen as risk-taking and edgey, as in South Park. I prefer it when filmmakers attack Hitler with more enthusiasm, like Quentin Tarantino did in Inglourious Basterds.

But I guess this was a family-friendly lesson in who-invaded-who. Despite The Beatles involvement and playing out with 'Give Peace a Chance', this is less anti-war than most dramas of the time. Peace also wasn't an option with the Axis forces set on world domination. In the end the most stirring passages are the propaganda and heroism from the movie clips, especially Dana Andrew's terrific climactic speech from The Purple Heart. I don't even think you can spot any dead bodies. Some war.

In contrast, TV documentary The World At War (1973) had already shown dead bodies, horrific piles of them, many of the diverse horrors of war from the testaments of eyewitnesses. The difference in approach is obviously stark. Showing soldiers marching to war, but not what can happen to them? Hearing about the war from a Prime-Minister rather than a footsoldier.

Still, the film might have held a few surprises for mid-seventies audiences, like the vintage colour footage. Had I gone to see it, I'd have also been unaware about the female workforce called into munitions factories and heavy manufacturing. There's footage of squads of all-African-American troops that counters most war movies' all-white casts. And I'd not seen any newsreel of the Japanese-American citizens being moved to internment camps, before even now. 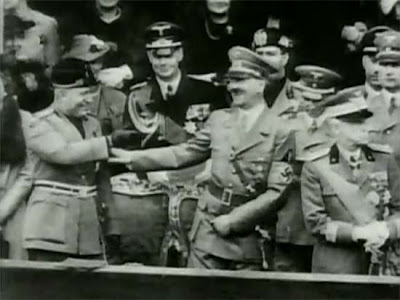 The version I saw on YouTube is ten minutes short of the (default) 90 minutes running time mentioned on IMDB, and I'm curious if there's any mention of the concentration camps in the original. Another huge difference from the portrayal of the war nowadays. The bombing of Hiroshima is also reduced to one distant shot. Instead, you learn more about which movie stars went to war...

So... All This and World War II works as a quick overview of what happened, for the impatient, and many of the songs interplay well with the images - the allies landing at Normandy against 'Life In A Day' is tremendous. This also teases up some of the great war movies, and the cover versions hold a great many surprises for fans of 70s rock and pop.

But 'I Am The Walrus'. Really? Ask if they'll play that at the U.S.S. Arizona Memorial and see what happens to you...

Email ThisBlogThis!Share to TwitterShare to FacebookShare to Pinterest
Labels: 1970s, documentary, music, NOT ON DVD