MY AMITYVILLE HORROR (2012) - a documentary about Daniel Lutz 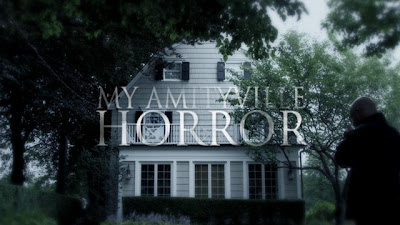 
The London Film Festival screened this smartly-produced new documentary at NFT3 last night. I went in almost completely 'cold', knowing only that one of the Lutz family children was interviewed. Hoping that it would expose the original Amityville horror as a hoax, once and for all, I was in for a few surprises.

If you haven't seen the The Amityville Horror (1979) or remake (2005), here's the story so far... In 1974, Ronald DeFeo Jr. murdered the six members of his family that he lived with. The following year, George and Kathy Lutz and their three children moved into the same house in Amityville, Long Island. There, loud noises, swarms of flies, eerie figures (and much, much more) disrupted their lives. They only stayed a few weeks, before fleeing in the middle of the night, leaving all their belongings behind. Their short stay became national news, selling magazines, books and then a series of films - all of which blurred the real events with constant retellings. Throughout it all, George and Kathy Lutz stood behind their original story until they both passed away.

With interviews old and new, relevant video and audio archives interviews and carefully chosen photographs, we now hear the story from the perspective of the eldest of the three children.

Daniel Lutz, now in his forties, confirmed many of the famous supernatural events from the original book. He'd the seen the swarms of flies, he'd been thrown up a flight of stairs, he'd seen the fanged pig with glowing eyes, his bed had levitated... I was immediately confused. I'd assumed the parents had concocted the stories to get out of debt, and kept the children away from the press to leave the story-telling to the adults.

Once again, we're presented with an enigma. Someone deadly convincing that they're telling the truth. This time, with seemingly nothing to gain, no movie rights, no book to sell. Living a life where the continuing attention has only made his life harder.

With no hard evidence, we only have the witnesses. The other two children wouldn't be interviewed for this film. Every supernatural event in the house left no useful trace and no convincing photographs. As he tells it, even the dead flies conveniently, immediately disappeared.

But Daniel also has further twists and revelations to add to the tale - events from before and after he moved into the house with the spooky eyes...

Young filmmaker Eric Walter was at the screening, telling us how he'd always been fascinated by the Amityville horror story, and extensively studying the evidence of it as a genuine paranormal event, particularly in online forums. He talked about the huge divide between the believers and disbelievers that still exists today. An insightful parallel is the divide between Christians and atheists - and this viewpoint is particularly relevant in one scene in the documentary.

Walter, describes himself as an agnostic with regards to religion and takes the same stance with his approach to the Amityville house. I don't think Daniel, who contacted him through the website, would have agreed to be interviewed and filmed if Walter was a firm disbeliever. But who in their right mind would tell Daniel to his face that they didn't believe him? He's very intense and intimidating, to say the least.

From the moment that George Lutz entered his life as a stepfather and forced his surname on the whole family, Daniel disliked him. Arguing with and antagonising him, even running away from home. If half the things in the book are true about George's behaviour in 'that' house, being possessed and acting erratically, forcing the family to march around, ten-year old Daniel would have reason to be scared as well as angry.

My own take can only be based on intuition - Daniel may have been thrown up the stairs, smacked across the hands and knocked around his bedroom, but by George, not by demons...

I think it would be in Daniel's greater interest to expose it all as a hoax. To finally unveil the mysteries of the Amityville horror. That would be a better, more saleable story than supporting the same events over again. The mystery here is as strong as ever. He's a very convincing spokesman. But that makes no sense to me.

He's interviewed by a psychologist, a reporter who has followed the story since the beginning, and by the director (Daniel looking straight to camera), an approach that made me feel quite uncomfortable, like I'd been locked in a room with him for two hours.

After over thirty years of Amityville horror books and films, the documentary assumes that the audience knows a little about the basis for the story. It doesn't waste time telling it all over again, but may confuse newcomers a little. 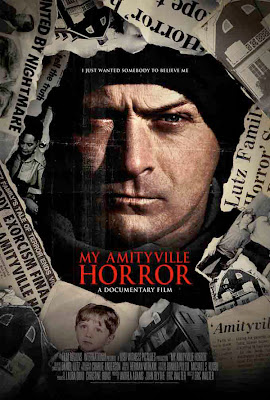 Currently appearing in festivals - it's too early to know what kind of wider release this will get in cinemas or on video. So keep following their updates...
http://www.amityvillemovie.com/

I'll talk more about my own take on The Amityville Horror phenomenon, starting back when I first saw it in the cinema in 1980, and looking at how it's been sold as "a true story"...