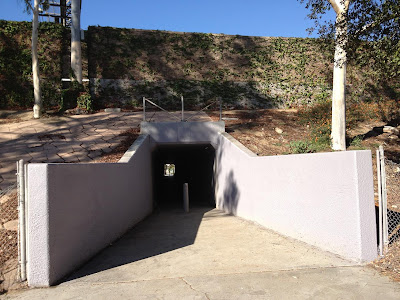 Coincidence (or was it LoveFilm) popped Absentia through the letterbox a week before our holiday trip to Los Angeles. I started watching it without even knowing where it was set. Sufficiently impressed, knowing we'd be in the neighbourhood, I wanted to go check it out in person.

An interview with the director gave some rough clues about where it had been shot, a walkway under Highway 134 somewhere in Glendale. In LA, I narrowed down the possibilities using Google Street View... Then it was into the hiremobile, and away!

Screengrabs in hand (from the trailer), we squinted down the dead end streets along Pioneer Drive to find the actual Absentia tunnel. This is also where director Mike Flanagan was living at the time - he filmed the action in his own home and around these streets). 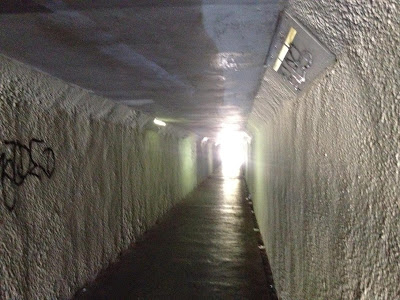 The location wouldn't make you look twice in the daytime, but inside the tunnel, it's seriously underlit. The contrast between Californian sunshine and near-darkness also freaks out electronic cameras like the iPhone... 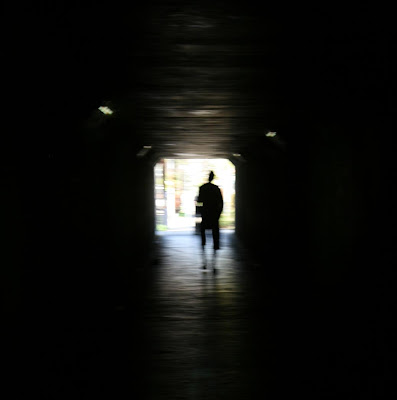 Facing my fear, I cautiously walked through. Thankfully there were no homeless people lying around inside...

This Google Map pinpoints the location. The circular car turnaround in front of the tunnel makes a good landmark. Remember this is purely a residential area - so please respect the neighbourhood and watch out for parking restrictions. And please don't grab any joggers by the ankles. 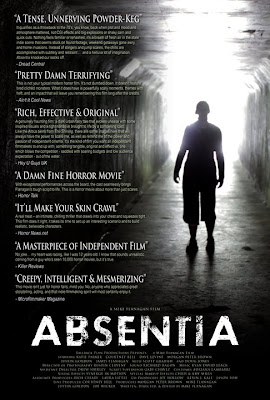 My review of Absentia is here.

(Location photographs by David Tarrington and Mark Hodgson. If you've seen either of them recently, contact the police station at Glendale, California, where they're still registered as missing.)
Posted by Mark Hodgson at 5:34 pm