Peter Cushing as DOCTOR WHO for Amicus Films 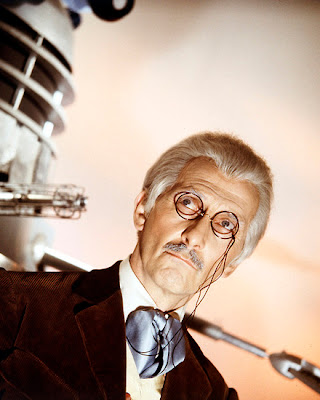 From Dr. Terror to Dr. Who...
With talk of an impending Doctor Who movie, it's worth remembering that two feature films have already spun off this BBC TV series that first appeared in 1963. Two stories from the William Hartnell era (the very first doctor) were each made into 2.35 widescreen colour movies, when TV was still shaped 4:3 and in black and white.

'The Daleks' was the second ever Doctor Who story and ran seven episodes starting at the end of 1963. 'The Dalek Invasion of Earth' ran six episodes and transmitted at the end of 1964. These TV scripts were then adapted into two brisk storylines for the cinema.

The films have always played on British TV, but would perhaps be better known to cult movie fans if they were explicitly credited as Amicus productions, one of Hammer Films main rivals in creepy horror. But the 'AARU' production credit hides this, because producers Max Rosenberg and Milton Subotsky didn't want to confuse audiences that they were getting horror. 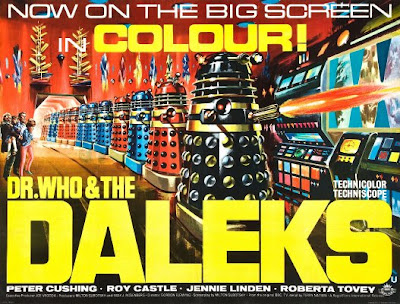 In Dr Who And The Daleks, one of the Doctor's granddaughters brings her boyfriend home to the Tardis, a police phonebox. Inside he finds himself in the time machine of Dr Who. By accident, they're whisked far into the future to a distant planet that's been decimated by nuclear war. The time travellers befriend the peace-loving, shiny-haired Thals but soon encounter a huge metal fortress inhabited by the fearsome and hostile Daleks...

Peter Cushing and Roy Castle starred in Dr Who and the Daleks the same year they appeared together in Amicus Films' Dr Terror's House of Horrors (also written and produced by Milton Subotsky). But of course both actors tune their performances for an audience of young children, the main fans of the Daleks on TV. Cushing does a great 'kindly old grandfather' turn, similar to his Grimsdyke in Tales From The Crypt, and a forerunner to the more scatty Dr Perry, in At The Earth's Core (1976).

Roy Castle had mainly been a musical entertainer (hence his trumpet-playing in Dr Terror), but soon demonstrated an empathy with younger audiences in the long-running children's TV programme Record Breakers. His accomplished gifts for dancing, acting and physical comedy made him a natural choice for light entertainment but strangely not many more film roles.

Roberta Tovey plays the Doctor's younger granddaughter - none of the actors in the TV version appear in the film adaptions. She later cropped up in bit parts in Beast in the Cellar and Blood on Satan's Claw (with another early Dr Who companion, Wendy Padbury).

Jennie Linden as elder granddaughter (a change from the TV character), was drafted in as a romantic foil for Roy Castle, but was usually in far more adult material, as the star of Hammer's psycho-thriller Nightmare (1964) and later starring in Ken Russell's controversial Women In Love (1969) opposite Alan Bates, Oliver Reed and Glenda Jackson.

In this concentrated form as a single short film, the story betrays its debt to H.G. Wells' The Time Machine. The peaceful Thals, like the Eloi, are exploited by the ruling Daleks who, like the Morlocks, live locked away from post-war radiation in a windowless stronghold.

The movie version breaks a cardinal rule by referring to the title character as "Dr. Who", when on TV he's called "The Doctor". Aside from this, Subotsky abbreviates six episodes into a snappy adventure, with one of the best-looking Amicus films dominated by the giant Dalek city sets that contain a host of surprises, including lava lamps.

There aren't many dated special effects other than a few matte paintings, but unintentional laughs may arise from the Thal men wearing silvery wigs and a lot of make-up. The young might find the Daleks as scary as ever. Or funny. Find some children who've seen it and ask them. 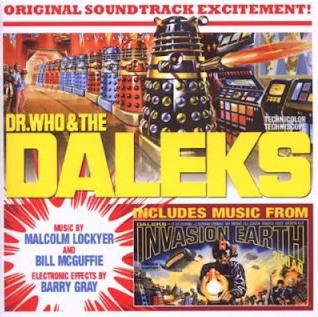 Composer Malcolm Lockyer provides the air of menace for this inhospitable planet, later scoring two more Peter Cushing horror films Island of Terror (1966) and Night of the Big Heat (1967). For this and Island of Terror, Lockyer also used Barry Gray to supply electronic sound effects, even though Gray was an accomplished musician himself (composing for most of Gerry Anderson's series and movies). Both Dalek movie soundtracks have recently been released on CD (above), providing a close substitute for the Island of Terror score which I'd still like to have. 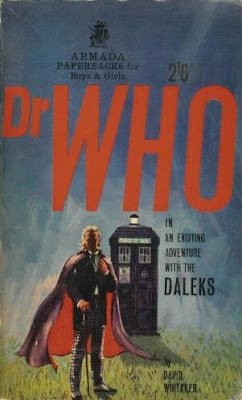 This adaption by David Whitaker of the TV story 'The Daleks' was re-released in 1965 to double as a tie-in for the films, hence the obscuring of the Doctor's face. The first Doctor Who paperback, it includes a number of black and white illustrations. It was several years later that novelisations of other stories began to regularly appear.

Doctor Who was originally aimed at children, shown between the Saturday afternoon sports programme, and the evening's adult entertainment. The response from young fans was huge, Daleks soon appearing in children's comics and toyshops. The tone of the first film is of a slightly scary fairy tale, while the second film is more bitter and adult-oriented. 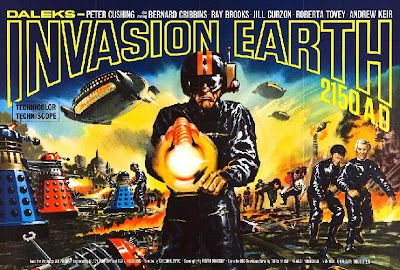 Again the movie begins in England, present day. This time a hapless police constable stumbles into the Doctor's police box and the gang are whisked forwards in time to a post-apocalyptic London. Among the ruins, they find a resistance movement against the Dalek invasion. If anyone is captured, they'll be robotised into remote control zombies. But while the resistance is being kept under control, the Daleks' actual mission on Earth is far more deadly...

While I've always thought that this scenario is more exciting than the first film, and I'd never pass up the chance to see inside a Dalek spaceship, the story attempts to summarise all seven episodes of the TV series, rattling through all manner of subplots and minor characters, often not involving the Doctor or the Daleks. On reflection, the first has a tighter storyline with the best characters driving the action. Set in outer space, it feels more futuristic than the many building sites and quarry locations of the second. I confuse the ending with the Bond film, A View To A Kill...

The cast keep it watchable, with angry rebel Andrew Keir stalking London's rubble ahead of similar scenes in Quatermass and the Pit (1967). To his credit, this is a markedly different character, reckless, impulsive and downright rude! A great contrast to his portrayal of the professor.

Again, Peter Cushing plays the Doctor, Roberta Tovey plays his granddaughter. But Jennie Linden's young female second fiddle is now played by Jill Curzon, and Roy Castle's comedy relief provided by another popular children's entertainer, Bernard Cribbins (below left). Cushing and Cribbins had just appeared together in Hammer Film's remake of She. Cribbins continues to appear in the present TV incarnation of Doctor Who.

The cast is further bolstered by Ray Brooks (Pete Walker's The Flesh and Blood Show), the late Philip Madoc, and Sheila Steafel (who also popped up in Quatermass and the Pit). Christopher Lee's regular stuntman Eddie Powell performs a nasty fall early in the film, a stunt in which he broke his ankle. There was one take and it's in the movie! Powell later performed many difficult scenes as the creature in Alien (1979).

Strangely, considering the huge popularity of Daleks and Doctor Who at the time, this didn't do financially as well and a third film was scrapped. I think I remember seeing the first film in the cinema, but definitely not the second. Did parents think it looked too violent for kids?
While Amicus Films initially shunned the idea of confusing children's films with their house style of adult horror, the two Dr Who movies led to them making a successful run of family-friendly adventure films throughout the 1970s, including three based on Edgar Rice Burroughs novels - The Land That Time Forgot, The People That Time Forgot and At The Earth's Core. 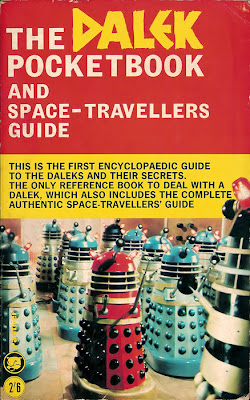 The Dalek Pocketbook was a fun Dalek tie-in. Also published in 1965, it was written by Dalek creator Terry Nation and while it features the movie Daleks on the cover, mostly delves into the fantasy world he elaborated on in comics, of the Daleks on their futuristic home planet of Skaro. It makes an apt companion for the 2002 Dalek Survival Guide. 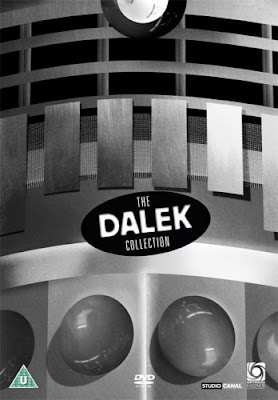 The two Dr Who/Dalek movies have been re-issued several times in the UK and Australia, always in good-looking 2.35 widescreen transfers and often as a 2-DVD double-bill pack. The Anchor Bay DVD releases for the USA are long out of print though. 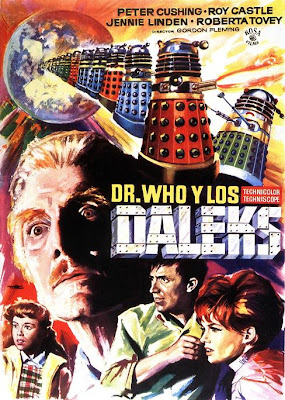 More Dalek movie posters here at Wrong side of the Art.