I'm looking forward to see Pixar's live-action adaption of John Carter this weekend, after first encountering the character in the 1970s when the eleven book series was reprinted.

DC Comics also ran these adaptions, half about John Carter of Mars, the other half about Pellucidar, another Burroughs' fantasy about a prehistoric 'cavemen and dinosaurs' civilisation at the Earth's core. The comic only lasted a dozen issues, but the epic story of John Carter has been tackled in several comics since. 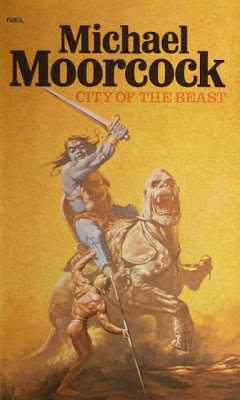 Three Michael Moorcock novels, written as an homage to Edgar Rice Burroughs and H.G. Wells, were first published in 1965 but reprinted in 1971 by NEL, when I first read them. I mention them here because they've a very similar premise and style to the John Carter books. A young scientist, Michael Kane (!), who just happens to be an olympic swordsman, is sent by matter transmitter to the planet Mars many eons in the past. There he fights hostile Martians and fantastic animals using only primitive weapons and his wits. I enjoyed Moorcock's 'Martian trilogy' immensely as a teenager, though I never finished the John Carter novels... 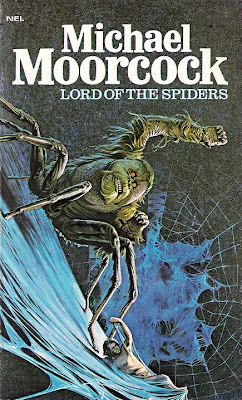 Again the cover art, particularly for 'Masters of the Pit', captured my imagination in that it looked like a modern, photo-real image. Unlike many of the illustrations on John Carter novels and comics, the hero is bravely portrayed as naked, as described in the Moorcock novels. This artwork also appeared in an issue of Science Fiction Monthly magazine, without the text. 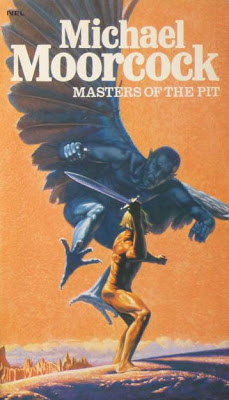 As a result, I still confuse the story of John Carter of Mars with this potent homage.