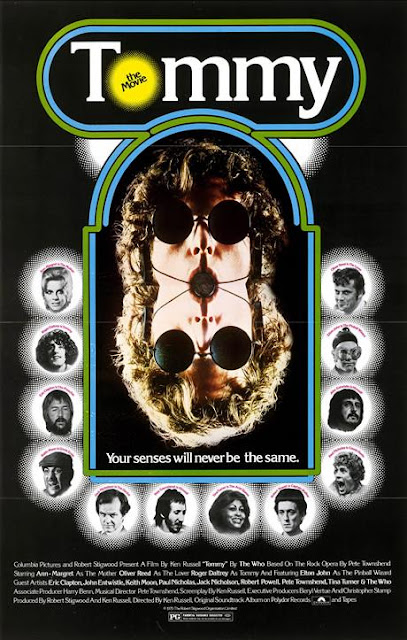 Ken Russell passed away on November 28th last year. His death was unexpected, catching me out just as I was preparing this review of Tommy. How dare he. Hopefully he'll still haunt a few projection booths where they show silent movies and play old classical records. Maybe scare some BBC executives into letting some young auteurs have free range of their facilities...

I won't attempt a full tribute, there are already several books on the subject, some of them by Russell himself. But it's my pleasure to continuing to highlight his films on these pages. You can always look at the many obituaries and tributes signposted on his Facebook page. But it was sad to have to say farewell to the film-maker who helped visualise and influence my own small teenage rebellion far more than punk rock did. Besides feeding my brain at a tumultuous time in my formative years, he was belting out movies that annoyed my least favourite people.


It helped that many 'messages' in his films weren't hidden under layers of cryptic metaphor or obscure satire. If he wanted to say something, it was shouted from a mountaintop by a female stormtrooper in leather fetish gear, or screamed by a dozen naked nuns, or projectile-vomited from a television set. It wasn't subtle, but it was very accessible. Much more than most other 70s arthouse. It was symbolism that anyone could understand. That is, I understand what's being said in individual scenes - TV advertising is hard sell, don't buy crack off Tina Turner, Marilyn Monroe was bigger than Jesus... But with Tommy, I still don't quite understand the main thrust. 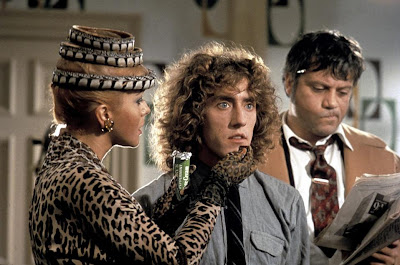 Tommy is a child of World War 2, but just as he's born, his air force father is shot out of the sky. His mum (Ann Margret) brings him up alone until she meets a cheeky wide boy (Oliver Reed) at a holiday camp. But after a childhood trauma renders him deaf, dumb and blind, his mum and new dad give up on him as a hopeless case. While they enjoy themselves, they leave Tommy in the care of various unsavoury friends and untrustworthy relatives (Paul Nicholas, Keith Moon, Tina Turner...).

But when Tommy discovers an astonishing mastery of pinball machines, his parents are delighted that his miraculous popularity could be hugely rewarding to them all... 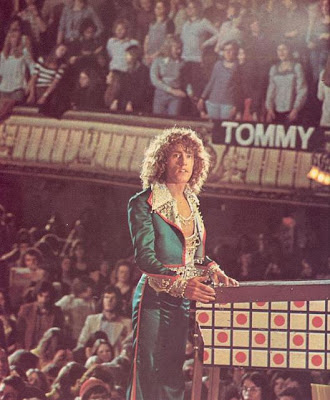 Tommy isn't Russell's best film (I honestly think it's The Devils), but it was his most financially successful. For me it's a musical equivalent of Zardoz. Mad, mystifying fun that I enjoy without fully understanding. I thought it was my young years to blame for being confused by this at a midnight cinema showing. But years of TV and video revisits have left me none the wiser.

I'd suggest Tommy as a parallel with Pink Floyd The Wall (1982) which I also don't fully 'get'. I know they're both concept albums angry at something, or a lot of things, both topped with a pop star with too much power. The central characters both have problems relating to the world, one is cut off from his senses, one cuts himself off from the world.

The difference is that The Wall is full of anger, hate, and so much negativity that some critics confused its Nazi-imagery with, well, Nazism. I can understand Pink's anger at his mother, teacher, judge, the war, but not Pink's transformation into a drugged-up hate-monger. The film and the music are memorable, but not enlightening. A dark vision of a young musician descending into a complete mental breakdown, in an England that could easily be nudged into fascism. Like Tommy, I understand which institutions he's angry about, and the subject of each chapter of the story, but not where it's all going. 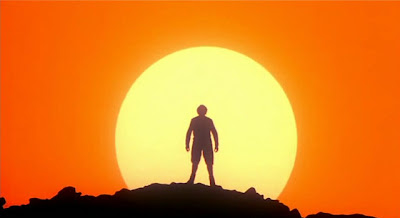 Tommy offers a few similar observations on the power of pop idols, but as a much lighter morality play re-written by the Carry On team. Oliver Reed provides seaside humour, and the nightmarish interludes are played for cruel laughs. I'd rather watch Cousin Kevin torturing Tommy and Uncle Ernie fiddling about as visualised by Ken Russell, rather than Alan Parker. It's still startling enough without shocking us into stark depression.


Russell has the hefty task of visualising every song before the vocabulary of the pop video had even begun. The crash zooms, lightning edits, costumes, sets and production design can still sufficiently blow your mind, with a fair few unintentional laughs (do gangs of bikers really find hang-gliders awe-inspiring?).

I really have no clear idea what Tommy is ultimately getting at, but at least Russell remains faithful to the text - the lyrics of The Who's original album - rather than trying to impose his own storyline. But this seems to be a story without a clear target. Organised religion? But is Tommy so oblivious that he's being organised? He seems really happy about it all.

A large part of the pleasure is the cast of familiar faces doing extremely unfamiliar things. There's Roger Daltrey acting and running around half-naked. His acting debut is earnest but not very special, but his tanned muscular physique is quite astonishing. 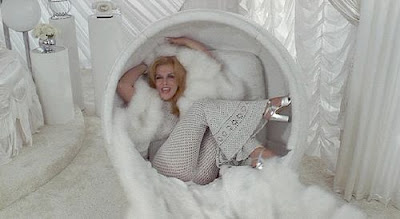 Meanwhile, Hollywood sex kitten Ann Margret is sensational - she can sing up a storm, dance like a wild thing, and can rock a huge chocolaty phallic symbol like no other. She gets full marks for apparently doing whatever the director suggested, in whatever clothes were provided. Her various transformations throughout the story demonstrate an impressive range of many talents. 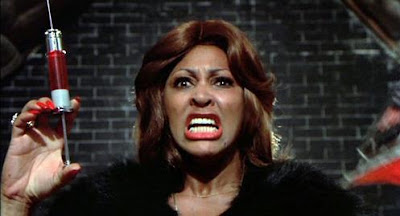 Russell-regular Oliver Reed can't sing or dance to save his life, but he can act his way through it all. Elton John can't act, but famously sings a great rendition of 'Pinball Wizard'. Incidentally, The Who's original album doesn't sound nearly as special without all these guest vocalists, like Tina Turner (as the freaky, frightening Acid Queen). 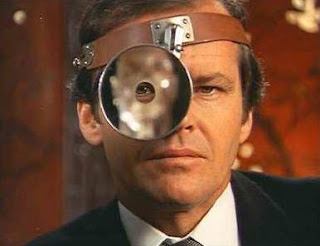 Jack Nicholson surprises simply by appearing in this at all, but also by giving an understated performance, in a Ken Russell film of all things. And he sings. In a convincing English accent. And he's just so damned handsome. And he knows it.

Like the other unrestrained 1970s Russell films, like the less-successful Lisztomania (also starring Daltrey), Mahler, The Devils... it helps if you lean back, enjoy the ride and let the madness just play out, as if your screen has just vomited baked beans all over you, but it's alright because you really like baked beans.

Bizarrely, the day after watching Tommy again, my Dad gave me an old newspaper cutting on the back of which was this album review. 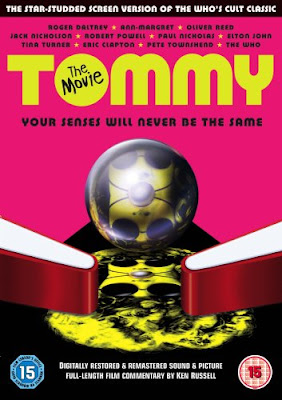 I watched this remastered region 2 UK DVD (above) which looks and sounds fantastic but is very short of extras compared to the earlier 2-disc release, which includes a documentary I'd like to see. It does still however have Ken Russell's commentary track. Pretty hateful cover art though... 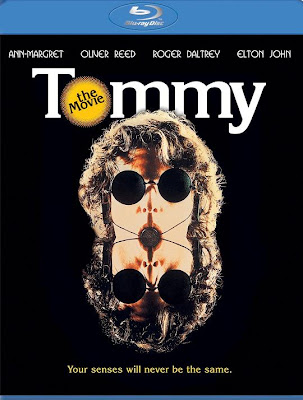 For those who want the best sound and vision quality, there's also a Blu-ray release in the USA (which I've yet to see). Again apparently short of extra materials.

A wealth of photos from Ken Russell's movies on this picture-heavy blog devoted to him...