﻿While I'm fully expecting Disney/Pixar's John Carter to be family fare, the story has often been sold using similar themes as, say, Conan The Barbarian. One man can sort everything out, and needs a sword far more than he needs clothes. The new movie will be the first time in decades that the story hasn't been sold with flesh as well as fantasy. 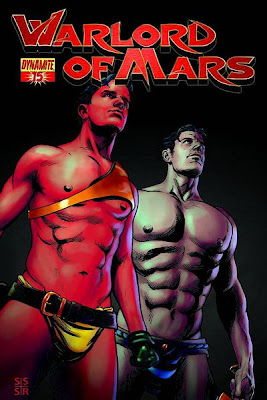 2012, Dynamite puts back the 'graphic' into graphic novels

Indeed, the current Dynamite Entertainment adaptions are now subject to a lawsuit for both the use of the character and it's pornographic representation. Presumably they missed Frank Frazetta's earlier works...

Large collection of cover artwork from a hundred years of reprints of John Carter novels on this FlickR account.

Much more about the many incarnations of John Carter here at the Barsoomia Wikia...