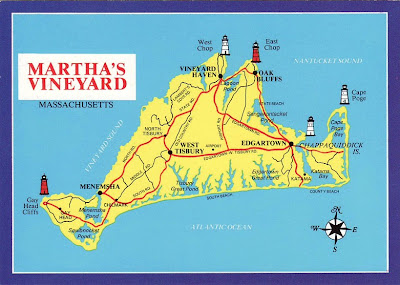 Concluding this three-part photo-tour of Martha's Vineyard, an informal look for the filming locations for Jaws (1975).

At the end of Part 2, we were at the far west point of the island at Gay Head Cliffs, an area also called Aquinnah. We drove back across the island heading north to Vineyard Haven, a small town on the west side of a large natural harbour.

This was a far smaller town than it sounded in the guide book, but it's one of the busiest places on the island, with two docks for the huge car ferries from the mainland. Therefore, this is the most likely location for the 'tourists on the menu' montage in Jaws. 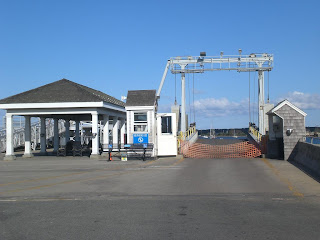 Driving to the other side of the harbour, in search of the Brody house on East Chop Drive, we had a look at East Chop lighthouse, one of five on the island.

Just down the hill from the lighthouse, the 'Brody house' has now been reclad, and the garage has been converted into a separate dwelling.

But the veranda at the back and their own little dock are still visible from the street. This end of the veranda was where Ellen Brody (Lorraine Gary) freaks out while looking at a book of shark attacks...

It's a private residence, the owner didn't even want it used again for filming Jaws 2. So we didn't spend too long lurking outside, and certainly didn't trespass on any private land to get a better angle.


Taking the coast road south from East Chop to Edgartown takes you along a long sandbar which needs two bridges to complete it as a roadway. The larger of the two bridges (the more southern of the two) was made famous in the film, where the shark enters 'the pond' while a false alarm distracts the police patrols.

This beach and the bay are the reason Jaws was filmed here on Martha's Vineyard, as the water is very shallow for a long way out. Meaning that the huge tracking mechanism for the shark could be easily laid in shallow water, for both the beach and 'at sea' scenes. The huge wide bay was relatively sheltered from crosswinds and currents, but the horizon could still be clear of land, to maintain the illusion that they were filming far out at sea.

Behind most of the length of the beach is a long stretch of water called Sengekontacket Pond. The action in 'the pond' is easier to pinpoint, where Brody's son meets the shark while sailing with two friends, and the policeman's desperate run to try and help him after being distracted by the stampede. Brody runs along the bridge and jumps over the side onto a much smaller beach by the entrance to the pond.

The rocky breakwaters, the bridge and the channel into the pond have recently been remodelled though. I was disappointed that the distinctive wooden supports for the bridge are now concrete pillars. 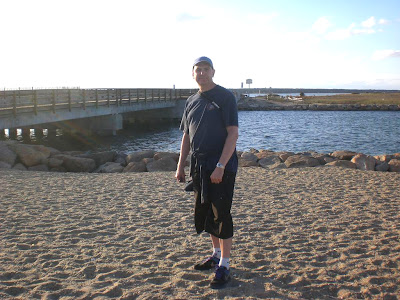 I wanted a shot of me standing here, blocking one of the most chilling angles in the film, when the shark submerges in this channel to go under the bridge and into the pond. To learn how they shot that, you'll need to read Memories from Martha's Vineyard.


On our final morning, we left the island on a small ferry from Oak Bluffs. I don't think this town was seen in the film, but it's the largest town on Martha's Vineyard, with the prettiest buildings on the island, making it the most usual tourist destination for daytrippers. 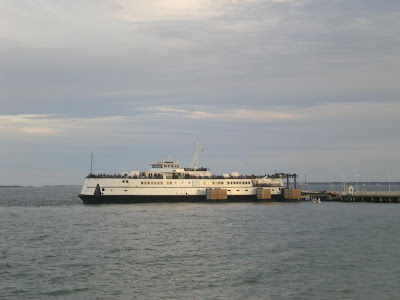 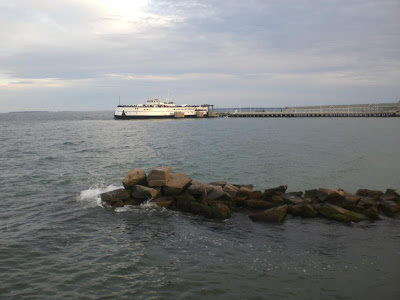 As you can see above, this dock at Oak Bluffs can't be the one seen in the car ferry montage in Jaws. Every time I saw these ships, I could hear John Williams music.

Just down from the harbour, on Spring Street, this shop makes a point of selling the best Jaws souvenirs. Of course, it was shut the day we were there. I suppose that gives us an excuse to go back!


Compared to some other of our 'location tours', we often had to use our imaginations. I spent a few moments at each spot, staring out to sea aimlessly wondering if that patch of water had seen any action. How desperate! For all I knew, we could have been in the wrong place at various parts of this tour. But I think we saw most of the locations that are still identifiable.

My main regret is that we couldn't find out where the closing shot (frame grab above) was filmed.  A stretch of deserted beach with a lighthouse in the distance. From what I'd read, I'd assumed it was the lighthouse at the top of Chappaquiddick, but we didn't have time to see that. I'm now thinking it looks more like the beach at Aquinnah with the Gay Head lighthouse top right. We also couldn't find any building that resembled the gutting shed where Brody and Hooper search the shark's stomach.

But this trip has further cemented my love for Jaws, appreciating how much was made out of so little. Some films use spectacular locations for impressive imagery. Making a spectacular film full of unforgettable images in a quiet seaside town takes special talent.

Again, it was weird to visit a place for the first time that was already so familiar. Thankfully, no teenage impressions have been smashed - the visit didn't reveal any outrageous 'cheating' or disappointments. Just a wider view of a place I first saw through a letterbox.

The making of Jaws - a look at the books and documentaries