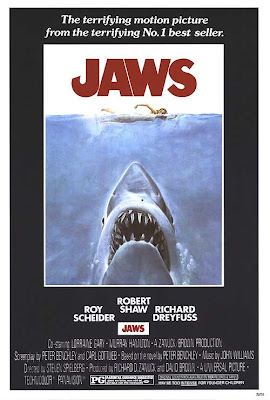 Continuing this look around Martha's Vineyard for filming locations for Jaws. (Part 1, a look around Edgartown, is here). 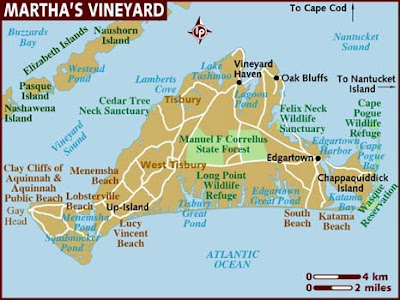 Day 2, we hired a car, because Jaws had been shot in all the farthest corners of the island. This part looks at the south and west of the island. In the map, you can see two roads forking down from Edgartown. We first headed south on the Katama Road down to Katama Point that juts out into Katama Bay. We then doubled back and took the other fork down to the easternmost end of South Beach. We then headed inland and crossed the island to Menemsha. Then we looped south around Menemsha 'pond' to get to the westernmost point of the island, the cliffs at Aquinnah...

This stretch of water is almost a lagoon, there's a very narrow strait as it passes by Edgartown. The sand spit that once joined Martha's Vineyard to Chappaquiddick has also breached (not sure exactly where). But Katama Bay is almost completely protected from the sea, making it an ideal shooting location when the crew became exasperated by filming up at the State Beach in the sea.

Nothing here is recognisable from the film, but it gave us a good idea of how much easier it was to shoot on the water here. The main drawback was being surrounded by land. There's no problem for any angles looking straight down at the water, but Spielberg also reasoned that the Orca was getting close to home by the end, so a coastline would be visible in the distance. It's the shores of Katama Bay that can be glimpsed towards the end of the movie.

Again, no chance of any landmarks along this stretch of sand and sea, but this is the beach where the opening bonfire was shot and Chrissie runs off. It's also the location of the discovery of her body... (Chrissie in the water was shot over at Cow Bay).

Of course, we had to give it a look and luckily found some of that fencing. 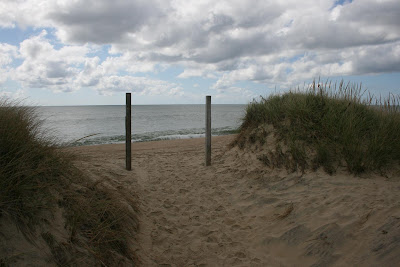 We drove north/inland and then west along the Edgartown - West Tisbury Road to the other side of the island. At the end of the road, we turned left into South Road and through Chilmark. We stopped off at the Abel Hill cemetery to pay our respects to John Belushi. South Road hits a crossroads called Beetlebung Corner where we headed north a short way to get to Menemsha. 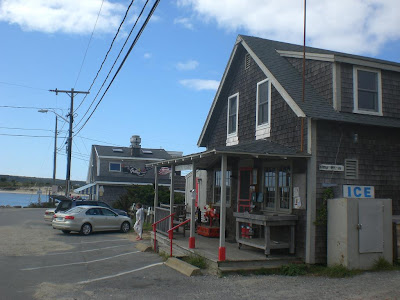 Driving down into Menemsha ends with these two buildings on the right. The Galley restaurant and a store now bookmark either side of the site where Quint's shack was built for the film. It's still a vacant lot. The production team were ordered to dismantle the building immediately after filming. It only ever existed for less than two weeks. As I showed in the previous article, the art gallery in Edgartown inspired its look. All that's left is a patch of grass at the end of the dock. The restaurant (above left) was also a vacant lot when the film was made. 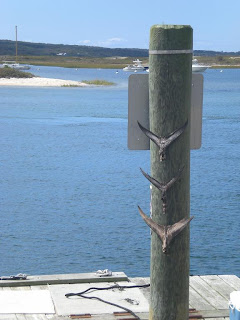 Menemsha has only a few buildings, but is a perfect natural harbour. The huge pond is also where the Orca and the huge flat barge used as a filming platform were initially laid to rest (until they were more recently relocated away from souvenir-hunters). 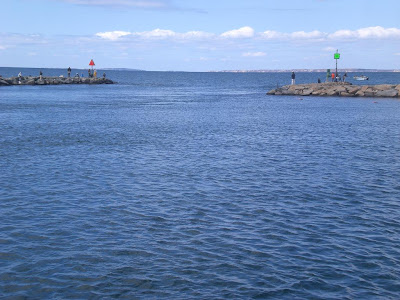 
Driving south from Menemsha, we hit Beetlebung crossroads again, but took the South Road heading west. The road loops around the huge Menemsha Pond and heads northwest to the very tip of the island. This is a popular tourist destination for the scenic view of the cliffs and another of the island's five lighthouses. But that's not why we went... 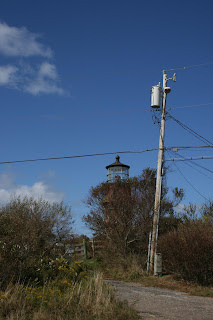 There you have it, folks. A stretch of water, a beach, two patches of grass and a couple of benches. Doesn't look too exciting.

But this is all that's left. Usually filming locations are instantly recognisable, but as you can see, this isn't so easy with Jaws. It still gave me a far better understanding of how the film was made - what was actually there and what was faked for the film. Also the conditions they filmed in. Locations of the behind-the-scenes photos are certainly more recognisable knowing how the island is laid out.

For the last part of this three-part photo-tour of Martha's Vineyard, we look at the Jaws locations on the north and east coasts of the island, including a visit to the Brody residence...

The Making of Jaws: if you want to know more, here's where to look

Memories From Martha's Vineyard: jawesome book of islanders' photos taken during filming in 1974