1977 is spread over two posts because it's too picture-heavy for just one...

Car Wash is a freewheeling slice-of-life comedy, with a little drama thrown in - a 'day in the life' of the employees and patrons of an L.A. car wash. A few years earlier, this may have been included as blaxploitation because of the mostly black cast, but the comedy and the UK chart invasion by Rose Royce tracks from the soundtrack album made this a mainstream hit. An early film to spawn a tie-in double album of original pop songs.

At the time, audiences found it amusing that Antonio Fargas, Huggy Bear from Starsky and Hutch was playing an outrageously camp gay guy, and surprised to see Lorraine Gary (fresh from Jaws) in such a small cameo. I had to assume that Richard Pryor was famous, because in 1977 I'd not seen him before. In retrospect, the biggest surprise in the credits is that the script is written by Joel Schumacher, as he transformed from costume designer to scriptwriter, before breaking into directing!

The above publicity shot of most of the cast is on the location where the whole film was shot, but no longer exists. Another Dee Luxe car wash just like it can still be found near Griffith Park.

The seventies were very rapey. Rape scenarios were common in adult thrillers and action films, even appearing on movie posters (Jackson County Jail) and exploited as the focal point of the story, as in Lipstick, Straw Dogs, Death Weekend and many more. Even a sci-fi thriller about a woman trapped in an automated house controlled by a sentient computer gets boiled down to this crass tagline for a publicity article.

Julie Christie stars in Demon Seed, directed by Donald Cammell made this rather mainstream thriller in between the more culty, arty, more celebrated Performance and White of the Eye. Fritz Weaver and Gerrit Graham also star.

Kirk and Spock in limbo. Nearly ten years after the classic Star Trek TV series had been cancelled, there were various rumours and false starts as a movie or a TV movie. Space wouldn't become cool again until after Star Wars was a hit.

Photoplay devoted more and more pages to TV shows. Here's Sally James on the set of London Weekend's Saturday Scene, a bare bones format when ITV and BBC just showed children's programmes for three hours before the sport came on. Saturday Scene had Sally linking and introducing the shows, interviewing pop stars and reading out letters.

They'd also play movie clips - mostly of The Jungle Book, specifically the song 'Bare Necessities', and the bloody Black Knight fight from Monty Python and the Holy Grail - in fact, I don't think they ever played any other clips besides those! The shows I remember that she introduced were Adam West's Batman and Ron Ely's Tarzan.

Later Sally would then be thrown into a more familiar Saturday morning format - the two-hours of mayhem, music and cream pies that was Tiswas, with its own huge studio and a bloodthirsty audience. 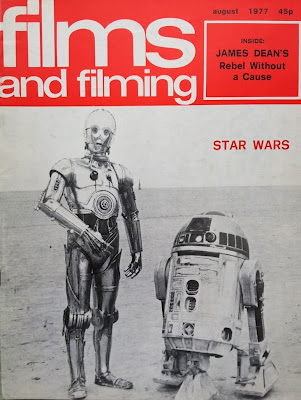 Just released in the US, here's an early British mention of Star Wars, illustrated by these early, soft-sell publicity photos. This spread (below) is made up of the most familiar, black-and-white images that were first seen from the film.

Here's an advanced photo-spread for William Friedkin's truly epic adventure Sorcerer, which had just clashed with Star Wars in US cinemas, and lost. It wouldn't be released in the UK until the following year, when it also lost half an hour from its running time and was retitled Wages of Fear.


Because it lost money, Sorcerer was then presented poorly on home video, only ever achieving a pan-and-scan release on VHS and DVD. The director publicly tracked down the negative earlier this year and it's been restored for cinema showings and a blu-ray early in 2014.


And the disaster movies kept on coming, relentlessly, like a runaway train, rolling towards a rickety bridge, called The Cassandra Crossing. With a bellyload of passengers trapped on board because one of them is carrying an experimental deadly virus. Also on board are Richard Harris, Sophia Loren, Ava Gardner, Martin Sheen, Ann Turkel and Ray Lovelock. Thrills, action, soap, carnage, WW2 history, helicopters and a horror/sci-fi edge in a creepy scene that could have been lifted from The Crazies. Plus a great score by Jerry Goldsmith. This has just been released on blu-ray.

More about The Cassandra Crossing here.


Like Two-Minute Warning and Black Sunday, Rollercoaster was sold as a disaster movie but is really a long police procedural as a race against time. The point-of-view shots onboard some of the biggest rollercoasters of the time are a throwback to Cinerama thrills, with the added dimension of a Sensurround rumble track to save you having to go to a fun fair. The opening carnage where a bomb derails a rollercoaster was vicious at the time, but of course can't compete with Final Destination 3.

Still an agreeable thriller, helped by laconic George Segal as the safety inspector battling against a mad bomber and all the proprietors who want to keep their fun fairs open despite the risks.


While Ray Harryhausen's special effects set a very high standard for children's fantasy entertainment, we were just as happy to watch Doug McClure fight stiff puppet dinosaurs in Edgar Rice Burroughs' adventures produced by Amicus Films. This was the sequel to The Land That Time Forgot.

After the success of The Golden Voyage of Sinbad, Harryhausen made this third Arabian Nights adventure, Sinbad and the Eye of the Tiger. Coincidentally, John Wayne's son Patrick starred in both this and People That Time Forgot.

You see? This looks quite exciting, and the cast was superb for just a sequel (Richard Burton, Louise Fletcher, Max Von Sydow, James Earl Jones). But, John Boorman's Exorcist II: The Heretic was one of the early culprits that gave sequels a bad name.

I think i saw Exorcist II, then The Exorcist on its five year anniversary re-release. Not the recommended way of seeing them at all.


Annnnd, the Jaws rip-offs continued blithely on along with many other 'animal attack' movies, until they were swallowed up by outer space. Orca - The Killer Whale was the most expensive movie in the wake of Jaws, Dino De Laurentiis mixing killer killer whales with elements of Moby Dick and Frankenstein. Besides Richard Harris and Charlotte Rampling, Bo Derek makes an early appearance.


More Jaws. Roger Moore's third James Bond The Spy Who Loved Me was the biggest summer hit that year. But Roger Moore's Bond films always seemed to be copying other movie trends rather than setting them. While the producers harped on about the huge new soundstage with three submarines parked in it, it wasn't as spectacular as the hollow volcano of You Only Live Twice. But I was sold on the opening skiing action and the three-in-one car chase.

Note: not many posters refer to "the provinces" any more!


Win a car like the one in Gone in Sixty Seconds! 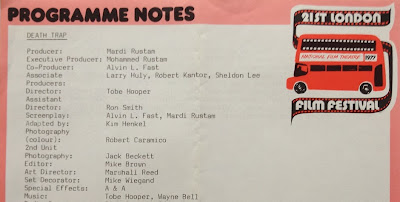 1977 was also my first time at the London Film Festival. The Texas Chain Saw Massacre hadn't hit cinemas yet, but here was Tobe Hooper's follow-up, Death Trap (now known as Eaten Alive). It looked pretty cheap on the big screen and got more laughs than screams, especially the wooden crocodile. The setbound swamp sapped its credibility too. I would have gladly swapped seeing this for a screening of Chain Saw.

A very advanced publicity shot of Roy Scheider on location shooting Jaws 2, with producers Zanuck and Brown. Not released in the US until the summer of 1978.


While movie magazines barely had a chance to herald its arrival by the end of the year, Star Wars premiered in London on December 27th (full page advert above) at two of the largest cinemas. The London Evening News ran a five day serialisation of the entire story to whet our appetites. On those pages were also adverts for the only merchandise available at the time - like the soundtrack album (below), the novelisation and the Meco disco remix album.


Lawrence of Arabia and more from 1963