A look at British movie magazines published in 1977. This was probably the peak of my cinemagoing years, at least weekly. I've several magazines from each month and there's plenty of great adverts in them, so this year will be spread over two posts because it's so picture-heavy. And speaking of heavy...


1933, 1976, 2005... every thirty years, a new version of King Kong! But this was my first Kong, as I'd somehow missed the original on TV before then. The publicity for this had been exciting, especially the news of a full-sized Kong robot, built by Carlo Rambaldi. After seeing the film though, his name wasn't a watchword for quality. Not until he worked on something more convincing, which he did with Close Encounters, Alien and E.T.. 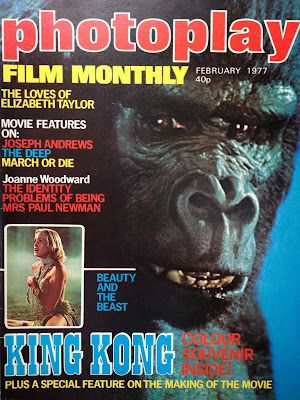 The producers played down the fact that for almost all of the movie, Kong was played by a man in a suit. Despite the lack of credit in the publicity material, they used Rick Baker in the suit (that he also built) for most of their publicity photos - like the shot on this cover (above). Baker was about to become a special make-up effects legend, wowing the world with his transformation and zombie prosthetics for An American Werewolf in London and later perfecting his ape suits for Gorillas in the Mist.


While lazily thinking that The Texas Chain Saw Massacre was a movie from 1974, it was a surprise to find Films and Filming reviewing it in January 1977 (above)! This single page led me to do a little research and write about the infamous horror film's rocky reception in the UK.

Especially weird that, because The Texas Chain Saw Massacre didn't get a usual nationwide release, movie magazines were running sensationalist adverts for horror films Schizo and Survive, while Chain Saw wasn't even mentioned and no adverts appeared in Photoplay or Film Review magazines to herald its release in cinemas. 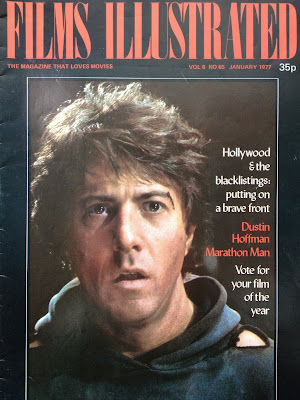 Marathon Man got a great head start with the publicity from William Goldman's bestselling novel. The movie adaption is a superbly tight thriller with a great cast, including Dustin Hoffman, Marthe Keller and Laurence Olivier (with William Devane and Roy Scheider in supporting roles!). It benefits greatly from the many New York City locations.


I'm not suggesting you see Elizabeth Taylor in The Blue Bird, it's just that this is a photo of her and a young Patsy Kensit!

The Enforcer. Shouldn't that be, 'Clint Eastwood is still Dirty Harry?'

Carrie was one of my favourite ever cinema experiences, making every other Brian De Palma film a must-see (well, until Wise Guys, anyway).

While US movies were moving to photographic posters, the UK were making do with painted artwork like this one for the first Sweeney movie, which makes it look like a boys' comic!


Simple poster for Scorsese's Taxi Driver. If someone could explain how Jodie Foster continued making Disney movies after appearing in this, I'd love to hear it!

The wonderful Grizzly, at one point going to be called 'Claws', is basically Jaws on land. With about as much gore - but not in UK cinemas. The widescreen DVD was my first chance to see the bloody mayhem. This has now been promised on blu-ray...


It only took a couple of films for word of mouth to save Garrett Brown the need to advertise his revolutionary way of producing smooth tracking shots without the need for laborious laying of tracks. The Steadicam mount also meant that the camera could move smoothly around corners and give more lifelike point-of-view shots. His work would be showcased extensively in The Shining, particularly the low angle shots of Danny roaming the corridor and running through the maze, not to mention the opening 'long-take' murder in Halloween. 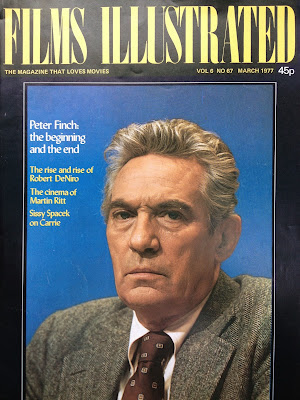 By the time Network was released, Peter Finch was already dead. His performance as Howard Beale, the news announcer who melts down on air but drives the ratings up, won him a posthumous Academy Award.
Faye Dunaway's ruthless TV executive still resonates today as the battle for ratings continues to exploit celebrity meltdowns...

A typical 'quotes' poster that tells you how good a movie is without letting you know what it's about. This is rare for Woody Allen as he's not directing and it's based on the true stories of blacklisted writers who used other writers' names to get their work commissioned. While Woody plays opposite Zero Mostel, this is as serious as it is funny. 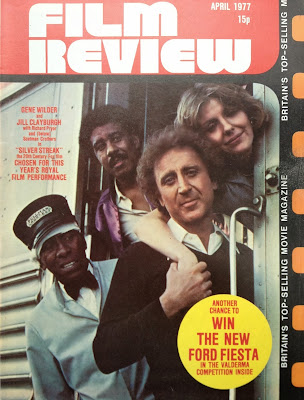 Not content to have a fast-moving action/comedy/romance, Colin Higgins had to add a huge 'disaster movie' scene. An early case of a story being 'Bruckheimered'. A lot of fun, the first film to team up Gene Wilder and Richard Pryor, but strangely not often mentioned alongside their later comedy double-acts. Richard Kiel also appears here as a silent killer henchman with silver-teeth, before being cast in The Spy Who Loved Me.

This looked too fierce and transgressional to tempt me into the cinema at the time. Don't think I could have coped with the opening newsreel scenes as a teenager (I'm assuming it was left intact in UK cinemas).

As an adult, I really appreciated its uncompromising ferocity as ahead of its time, with a unique tone that failed to be replicated in the recent remake.

More about Would You Kill A Child, here.

Tentacles needed a lot more money to live up to the concept of a giant killer octopus. It's still bonkers-watchable for the incredible cast coping with a bloody awful script. Bo Hopkins should get some sort of Bad Oscar for his heartfelt speech to his killer whales. Catchy score from Stelvio Cipriani though.

As we've seen (Taxi Driver above) Jodie Foster was already in demand, here starring in creepy Canadian thriller The Little Girl Who Lives Down The Lane. The story of this not-so-little girl living with her dad on the edge of town, trying to fend off the attentions of predatory paedo (Martin Sheen) is still very watchable.

More about The Little Girl Who Lives Down The Lane, here.


After two adult thrillers, Jodie's back again as the lovable tomboy who swaps bodies with her mum (Barbara Harris). Elements of the story had been done before, but this was the first Freaky Friday and years before Big. Jodie on a skateboard! 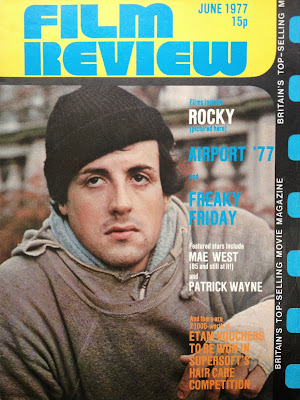 By the time the UK got Rocky, the publicity could wave all its Oscars at us. Then sports movies suddenly got big... 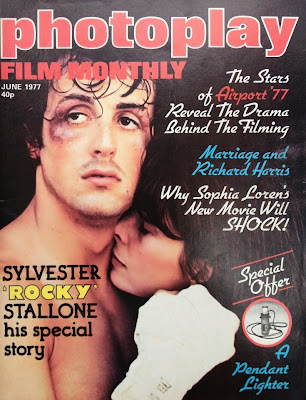 Director Dan Curtis was better known for his TV series (Dark Shadows, Kolchak - The Night Stalker) and creepy TV movies (Trilogy of Terror) but based on Burnt Offerings, should have been given more movies. Oliver Reed, Karen Black, Bette Davies and Lee Montgomery are all impressive.

I compare Burnt Offerings to The Shining, here.


This had flack at the time for the bad language - something hard to imagine now. Now it comes over as an honest portrayal of locker room talk. What keeps Slap Shot interesting is the desperate story of the small town ice hockey team mixed with offbeat pre-Animal House humour. It also bears comparison with Parker and Stone's Baseketball.


The cast alone makes this worth a watch, not to mention the extensive location work. The massive WWII operation recreated, is undercut by not being famous as anything pivotal in the history of the war. One of many impressively sprawling epics directed by Richard Attenborough.