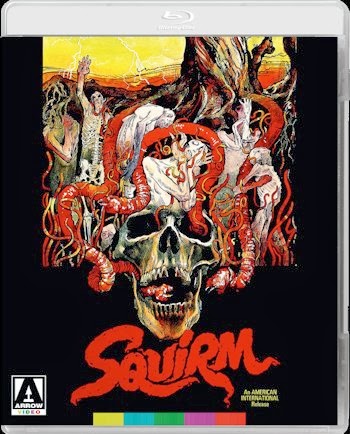 Now on blu-ray - Squirm still isn't for the squeamish

We're currently being spoilt in the UK, by Arrow Video's cult horror releases. They're not only keeping great horror films in circulation, but restoring them in high definition as well as flattering them with brand new artwork and extras.

Recently released, Squirm has never looked better, one of those low-budget independent films that I once assumed was shot on 16mm (like The Texas Chainsaw Massacre) because the prints looked so grainy and beat up. But treated with care, Squirm has scrubbed up really well, now looking like a carefully-filmed 35mm. It's not even very grainy anymore, except for some of the night-time scenes. 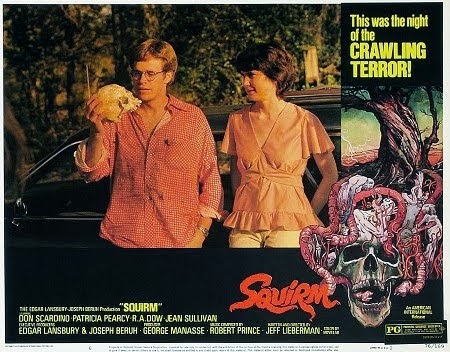 As a fierce thunderstorm brings down a small Georgia town's electricity supply, the local population of bloodworms are forced out of the ground and into safer, dark places. They like dark and wet, but they also like to bite...

Into the chaos arrives a hapless city boy (Don Scardino), soon up to his neck in swamp water and trouble with the local sheriff. He's come to visit a young woman (Patricia Pearcy) he's sweet on, who unfortunately lives next door to the local worm farm. When 100,000 worms disappear, along with some of the townspeople, the young couple soon discover that everyone could be up to their necks in trouble... 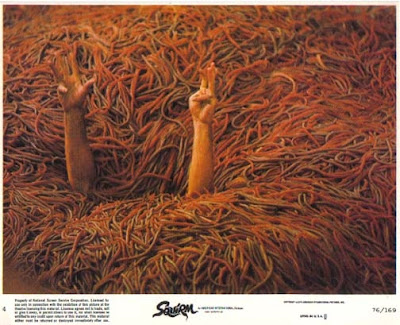 This was an early animal attack movie of the 1970s where a whole species goes bad, rather than a single rogue shark or bear. It takes its cues from The Birds, right down to the frosty reception that the city boy gets from the over-protective mother. What sets Squirm above many in the genre is that we care for the characters, who get plenty of time to introduce themselves before the worms get nasty.

This slow start then accelerates into rapid nightmarish scenarios that still have me fetching my feet off the ground. Close-ups of these large vicious bloodworms, with their really nasty pincers, are one thing.Seeing whole seething piles of them literally squirming around still really makes me squeamish. They look nasty, they're fast and, well, really icky. 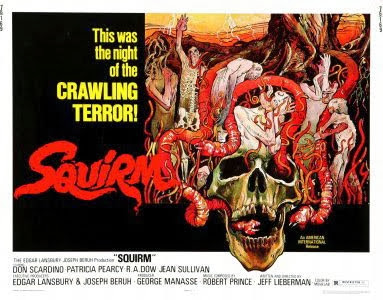 When it was released, UK films were still being trimmed of gory footage, even 'X' rated horror films. Gun shots and stabbings were all toned down, but scenes that couldn't be copied by the audience, like worm attacks, were left untouched. These made a big impact on me because the gory close-ups were left in. A clever 'burrowing' effect was devised by Rick Baker, with advice from his mentor, make-up maestro Dick Smith. Smith had used his delicate bladder effects to 'write' scarred words on the skin of the possessed girl in The Exorcist. Baker used a more complex variation of this effect in one notable shock scene in Squirm... At the time, we didn't know what we were looking at! Baker was about to move from low-budget horror into a blockbuster nightmare for his strenuous role in the King Kong remake.

I certainly looked out for director Jeff Lieberman's name after that. L.S.D. timebomb Blue Sunshine followed shortly afterwards, but many consider his backwoods slasher Just Before Dawn (coming soon to blu-ray from Code Red in the US) his best horror film. But my heart belongs to Squirm...

The Arrow blu-ray includes a great interview with the director and the star Don Scardino (now a director himself) and their adventures making the film, including wrangling 250,000 worms (eueeeecccch!). The blu-ray set also includes a DVD of everything. Like I said, the transfer makes it look like a brand new film, but it didn't even look that good in 1976, when I first saw it... 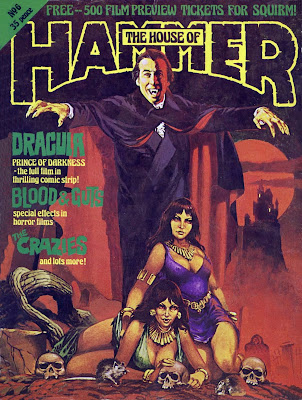 1976 was the year I first stood a good chance of getting into 'X' certificate movies, even though I was too young. You had to be 18 to get into an 'X'. At the time I was reading the only available British horror movie magazine, The House of Hammer. In issue 6 (above), there was a full-page advert (below) offering free tickets to see the brand new horror film Squirm. What had I got to lose? The price of a train ticket up to town, if I didn't get in. Squirm was released in the US in 1976 and wouldn't be released in UK cinemas for another seven months, in the summer of 1977.


December 4th, 1976, Saturday morning: I took the train up to London in my most adult-looking anorak and looked for the Rialto Cinema (below) on Coventry Street. It felt unusual to be going to a West End cinema in the morning. I remember being nervous about not getting in, but the guy on the door just laughed when I turned up, and then cheerfully waved me in. I don't think I fooled him for a minute, but he didn't really seem to care that I looked too young...

Inside, the stalls weren't full and I sat fairly close to the front but away from the central aisle, sticking to the shadows in case anyone changed their minds. The organisers then got the fancy dress contestants up on stage - first prize, an original Squirm script! I think the guy dressed as a ghost with a Don Post grinning skull mask won, only to be told that they hadn't won the script to Squirm, but Satan's Slave instead. The audience groaned in sympathy.

They also promised extra screenings around the country. On the new Arrow Video blu-ray, Kim Newman speculates that Squirm was more popular in the UK than the USA. The House of Hammer coverage certainly gave Squirm plenty of positive publicity and the movie didn't disappoint. Director Jeff Lieberman (talking at a recent retrospective, also included in the Arrow blu-ray/DVD) heard that it ran for a year in a London cinema. Perhaps it was the Rialto, at the time owned by Brent Walker, the Squirm distributors.


Several months later, photos from the event were published in House of Hammer #9, along with their review of Squirm, finally released in July 1977. (Some of the photos can be seen here). The article points out that trailers for Death Weekend, Futureworld and Food of the Gods ran beforehand, but I've no recollection of those - perhaps I arrived late? 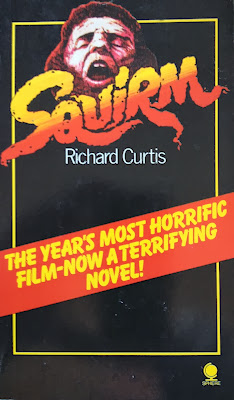 My next experience of Squirm was the paperback, that reminds us that the worms drive the character 'Worm-face' mad because they're burrowing into his brain... Kim Newman reminds us that this novelisation wasn't written by that Richard Curtis. Pity. It was reprinted many times, without any mention of the film, because it then slotted neatly into the animal attack horror novel genre, alongside James Herbert's The Rats and Guy N. Smith's Night of the Crabs... But this is still my favourite cover, which I think is the same as the original UK campaign. 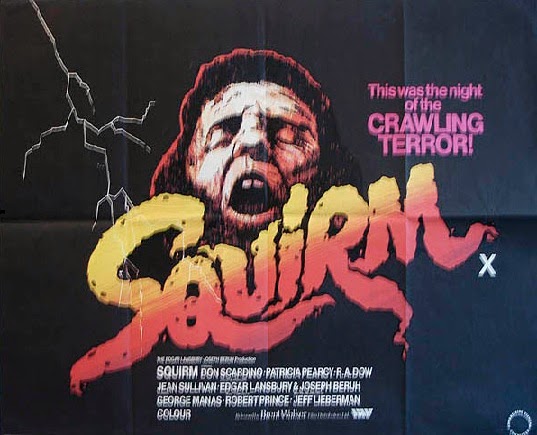 Much much more about The House of Hammer magazine, including the esteemed artists who adapted Hammer films as comic strips, and photos from the Squirm fancy dress competition on that fateful morning - here on publisher Dez Skinn's site

The Rialto Cinema on Dusashenka's Flickr site for London cinemas.