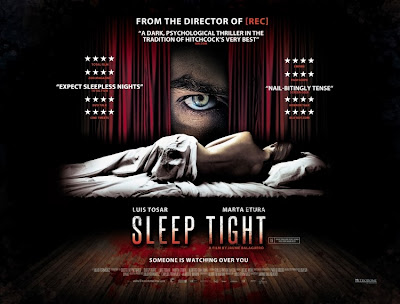 (Updated May 2014, to include Fragile review)

Sleep Tight is the latest in a series of impressive and original thrillers directed by Jaume Balagueró, most of which take place in an apartment building. I'm guessing that is the kind of place where he grew up...

The story of Sleep Tight starts as a man wakes up, kisses the woman asleep in bed with him, and gets ready for work. He's the desk supervisor in that apartment building and he needs to be at the desk early. When the woman leaves for work, she barely looks at him. We realise that they're not a couple... 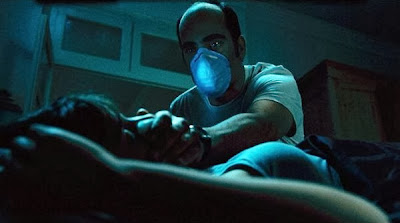 With the pass-key and some daring tactics, he's sleeping with her without her knowing it. The situation gets more horrifying as it deteriorates, while remaining logical and plausible. A premise that means you might never sleep soundly again...

This is one of the director's best stories yet, presents his most carefully etched-out characters and features his best cast so far. I'd call Sleep Tight a 'creeper' - the story goes at its own pace, gradually getting more creepy. 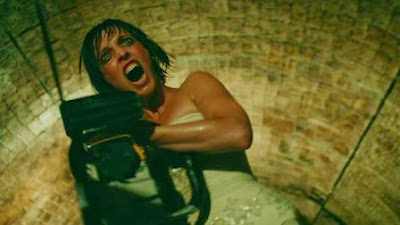 Balagueró's stories are strict with logic and continuity, both lacking in many modern horrors. He has equal compassion for male and female characters, young and old. But what's with all these apartment stories?

He's the writer/director behind the successful Rec series. Rec spawned Rec 2, Rec 3: Genesis and the upcoming Rec 4: Apocalypse. Most of his films have been made in Spanish, so Rec was remade in the US as Quarantine, which now has its own sequel. 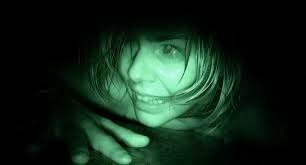 Rec could be filed under the 'found footage' genre, but it's one of the most intelligent uses of video cameras as part of a story. A young reporter making a TV show about firefighters follows a crew as they answer an emergency call in an old apartment building in the heart of the city. Once inside, they find themselves trapped with the residents, who are being killed by something upstairs. They can't escape because the authorities have sealed the building...

If David Cronenberg's Rabid was a video game, it would look like Rec. The ferocity of 'the infected' lurking in the shadows stayed with me - an effectively realised nightmare. 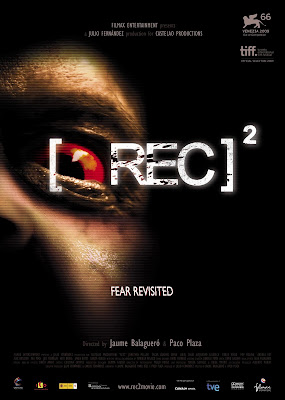 But Rec 2 is one of the best horror sequels I've seen, taking place in the same time frame as the first, the story carefully intertwined around the original and extending them with an even faster pace. I love that he's fleshed out a fictional place so carefully. 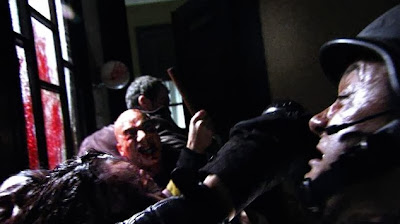 Rec 2 (2009) tackles the mysteries from the first film, but hits the ground running much faster. Knowing of the danger inside, I was already tense from the very start, and the suspense impressively never lets up. Something nasty can happen at any moment.

While we're on this series, I'll say that Rec 3: Genesis (2012), the only one which Balagueró didn't direct, also takes place in the same time frame as the first two, despite the title suggesting it's a prequel. Rec 3 has been criticised for introducing humour. I thought it succeeded, and fairly sparse among the usual 'no holds barred' thrills. The setting also spreads the Rec concept on a grander scale. And what better occasion for a story to rely on video cameras, than a wedding... 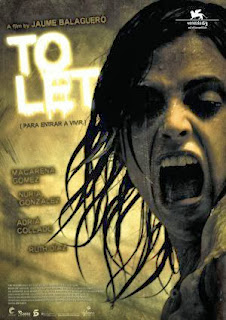 Keeping a lookout for his name, I caught another of his horror films set in an apartment block, on Film4. To Let (2006) is part of a collection called Films To Keep You Awake, each from a different director. Not as consistent as his later work, but again demonstrating his obsession with apartment claustrophobia. 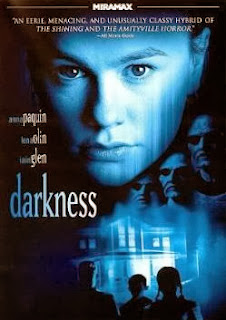 While writing this, I realised that his 2002 film, Darkness, was the very, very first film I ever reviewed in this blog, back in 2005. Relying mostly on in-camera effects and bursts of disorientating editing, rather than CGI monsters (an approach that the director has since stuck with), it then had trouble getting distribution. The wider international release was delayed for two years after it first appeared in Spain, despite being filmed in English (starring Anna Paquin, Lena Olin and Iain Glen).

I found it on DVD in Thailand in a 104 minute (original length) cut, before the US release (in 2004) and UK (in 2005) saw it with a shorter duration of 88 minutes. (The current UK DVD is the short version, the USA have the longer, slightly bloodier version on DVD and blu-ray).

Darkness is beautifully shot (in 2.35 widescreen) and often creepy, but short on satisfying pay-offs both in storylines or suspense. That's despite having something in it that wouldn't look out of place in Rec. While not set in an apartment block, Darkness relies heavily on the oppressive interior of a building. 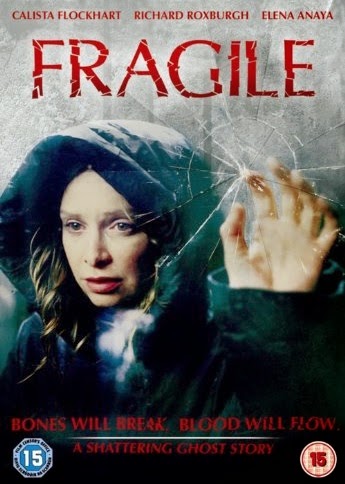 Fragile (2005) was partly shot in England (including on the Isle of Wight) again with a named cast, headed by Calista Flockhart, Elena Anaya (The Skin I Live In), Richard Roxburgh (Sanctum, Van Helsing) and Gemma Jones (Ken Russell's The Devils). 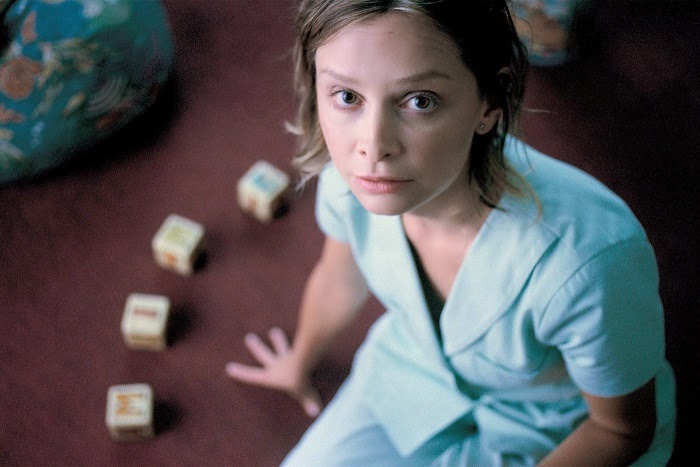 Again the scares are confined to a single building, in this case, an old hospital being closed down. The children's ward is among the last to be evacuated and just as a new nurse (Flockhart) joins the staff, a child mysteriously breaks his leg, while simply lying in bed...

Like his other non-Rec horror films, this is a character-led story that slowly increases the tension at its own pace. The fun is in the building atmosphere and the unfolding mystery. It packs its punches when its good and ready!

Really enjoyable, with a cast who rarely appear in horror films keeping the approach fresh.

Balagueró is a director who has stuck with thrillers and knows how to thrill. I'm looking forward to catching all his earlier films.

A concise career overview of the director, in the Electric Sheep online magazine, also catalogues the delays with his earliest films...