A look at how the big movies of 1976 were released in the UK, their advertising campaigns and coverage in the movie magazines of that year... 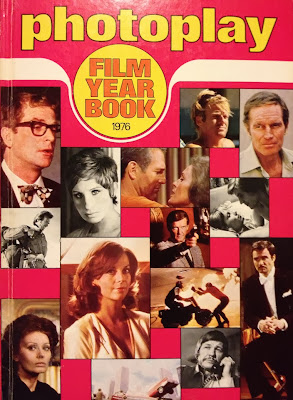 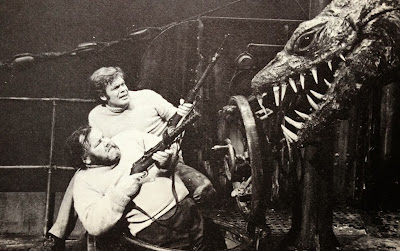 An article about special effects in the Photoplay Film Year Book includes this shot from The Land That Time Forgot. Doug McClure and Declan Mulholland on the deck of their submarine, fighting the full-sized prop of a plesiosaurus head (with notably rubbery teeth).

In 1976, Mulholland would shoot his scenes as the original Jabba the Hutt, walking alongside Harrison Ford, for the first Star Wars. The scene didn't make it into the film, but was reinstated for the Special Edition, with a downsized, computer-generated Jabba pasted over his performance. He can still be seen in 'making-of' before-and-after clips in documentaries and DVD extras. 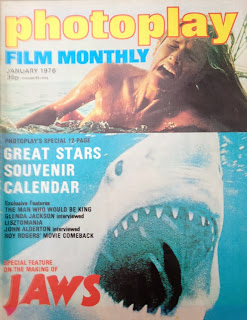 What would you rather go see in January 1976, Jaws or Barry Lyndon...? Me? I saw Jaws and then went back and saw Jaws again... 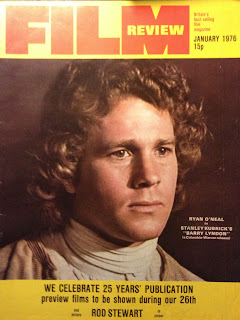 This incredible cover photo impressed me so much that I still haven't seen Barry Lyndon.


A Stanley Kubrick film is always an event, this one using much of the research he'd spent years working on for his aborted Napoleon project. But it's not as much of an event as a great white shark eating its way around Cape Cod. Perhaps this is why Kubrick started phoning Spielberg in the middle of the night.


Some of my favourite movies have been released on Boxing Day, despite them being far more suitable for the height of summer.

Much much more about Jaws here - the movie, the merchandise and a visit to the filming locations...


The Man From Hong Kong has now been rediscovered as one of the most action-packed Australian films of the stunt-heavy seventies. Packaged as James Bond meets kung-fu... down under.

After a year of coverage in the movie magazines, Rollerball finally gets released in the UK, certificate 'AA' (no-one under 14 admitted).

James Caan again. Sam Peckinpah's trademark cross-cutting, slow-motion action sequences are the only thing I remember about The Killer Elite, one of the few of his films that made it intact to TV. The action thriller pits ninjas versus guys with guns. Guess who wins...

The last Hammer horror film is one of their darkest. A low-key, straightforward depiction of Satanism, with Christopher Lee at his most evil. In their earlier adaption of a Dennis Wheatley horror novel, The Devil Rides Out, Lee played the good guy...

More about To The Devil A Daughter here...

Nicolas Roeg picked David Bowie for his favourite, most unearthly-looking actor. In The Man Who Fell To Earth, Earth gets its first close encounter, before they were called close encounters...

Considering everyone knew the ending (especially after seeing the poster), The Hindenburg is an interesting and dramatic theory of why the disaster happened. But I remember the climax being especially disappointing when it flicked into black-and-white, so that the 16mm newsreel could be cut in, instead of being recreated by new modelwork. 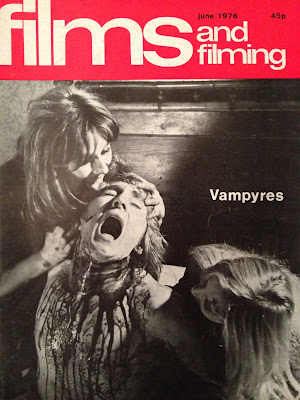 Zoiks! Films and Filming's goriest cover. A good job it wasn't in colour. Vampyres director, José Ramón Larraz recently passed away. I'm sure he was pleased to see this getting released on blu-ray though.

Spielberg's follow-up to Jaws, was eventually called Close Encounters of the Third Kind. Here's news of it early in production, with a less confusing title.

Films and Filming were livening up their photo-previews by presenting them with shots of the director getting involved. Above is a very tired-looking George Pan Cosmatos filming 'outbreak on a train', The Cassandra Crossing. He later directed both Rambo 2 and Cobra with Sylvester Stallone. His son Panos recently directed cult psychedelia Beyond The Black Rainbow.

The delay in releasing Rollerball meant that Roger Corman's similarly-themed Death Race 2000 rolls up only a few weeks later. It was compared to Rollerball in the British press and favourably-reviewed as being better satirically. A great script and funnier than it looks, though director Paul Bartel was unaware that the second-unit was sent out to beef up the blood and gore as well. The censor didn't fall for the jokes though, and cut the kills for cinemas, despite the 'X' certificate.

Richard Rush (The Stuntman) directed this early 'buddy cop' movie, mixing the tough tactics of a borderline-insane detective with comedy and car chaos, years before any Lethal Weapon was drawn.

William Girdler's Jaws-with-claws arrived in cinemas remarkably speedily after Jaws, also pre-empting the Jaws 2 attack on a helicopter by two years! Grizzly sneaked out while 'animal attack' movies could still show gore, though it plays much more like a slasher movie. Of course, we saw far less gore in the UK than the US. The uncut DVD special edition was quite an eye-opener! Grizzly is now promised on blu-ray by Scorpion in the US. 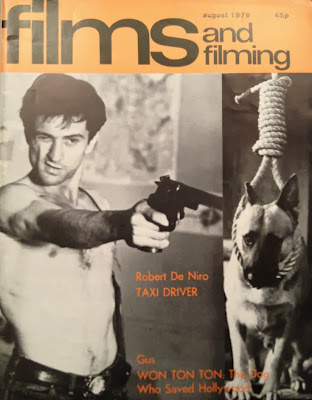 The late Karen Black cheats her way into Alfred Hitchock's gallery of blonde female stars by wearing a wig as a disguise in Family Plot. The very last Hitchcock film is a disappointing light comedy.

Margaux Hemingway in what I think is a missing scene from Lipstick. She starred alongside her younger sister Mariel in this rape-revenge thriller opposite Chris Sarandon and Anne Bancroft.

Director Pete Walker (Frightmare, House of the Long Shadows) shows Stephanie Beacham how to wield a knife in bloody whodunnit Schizo. Released this year on blu-ray in the US, by Redemption Video. 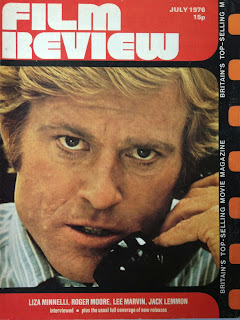 It was fairly easy for Film Review to predict the coming hits on their preview covers, especially after the Oscar ceremony. All The President's Men won four awards that year.

If you wanted anyone to star as you in a film, in 1976, it would be Robert Redford. Journalist Bob Woodward was the lucky one, runner-up Carl Bernstein is played by Dustin Hoffman. Here the actors pose with the team they portrayed in All The President's Men.


We finally get to see it in September, following the sensational news headlines and the best-selling book, written by the two journalists who cracked the case and exposed the President of the United States to be a liar. Richard Nixon's crime was to sanction government agencies to listen in on anyone's telephones. He resigned. Times have certainly changed.

Producer/director Moustapha Akkad is best known by horror fans for making John Carpenter's original Halloween possible, and for producing each of the sequels. Just before all that, he'd made this epic about the birth of Islam, The Message, starring Anthony Quinn.

The Message will soon be on blu-ray from Twilight Time, along with the epic follow-up, Lion of the Desert.

Here's Moustapha Akkad (on the right) with Anthony Quinn while filming The Message.

These kids don't know how lucky they are, because they won a set visit to Star Wars, before anyone knew what Star Wars was. 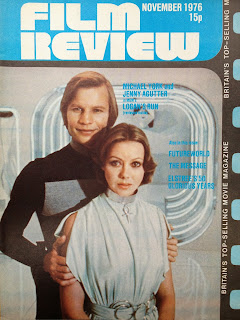 While the dated special effects (and especially the wobbly robot) of Logan's Run was lucky to appear in cinemas before Star Wars, we were about to be starved of predictive science fiction films that had something to say.

This photo-spread rightly shows off the extremely complex and dangerous 'Carousel' scene, with multiple stunt performers simultaneously hanging in the air on wires.


I can find no mention in Film Review or Photoplay of The Texas Chain Saw Massacre opening in cinemas. Yet they have no problem with the posters for Survive! and Death Weekend. To be fair, Chain Saw had an unorthodox release and wasn't co-ordinated on a national basis, but rather with individual Borough Councils!

Survive! also told a real life tale of cannibalism, when a plane crashed off-course in the Andes. It was dramatised again as Alive in 1993.

Much more about Survive! here.


Another rape-revenge thriller where, like Lipstick, it's the assaulted woman who takes revenge. Lipstick predated The Accused in highlighting the lack of legal support women had at the time. Death Weekend is a more straightforward thriller, but unlike Death Wish and like Lipstick, it's the woman that takes revenge. This also draws on Straw Dogs, with a home invasion and an isolated setting. All these films predate the infamous I Spit on Your Grave, a gorier, far more exploitative reworking of the premise of Death Weekend. But I bet they were jealous of the poster's tagline (above).

Still not on DVD, more about Death Weekend here...

Like Phantom of the Paradise, Brian De Palma's Obsession wasn't a hit, though both were received well in Britain. His next film launched his fortunes, something called Carrie. Out of all the posters I've seen for Obsession, this is my very favourite, also used on the vinyl soundtrack. Obsession boasts one of Bernard Herrmann's last soundtracks and some of De Palma's best work. It's just been released on region-free blu-ray in the UK by Arrow Video.