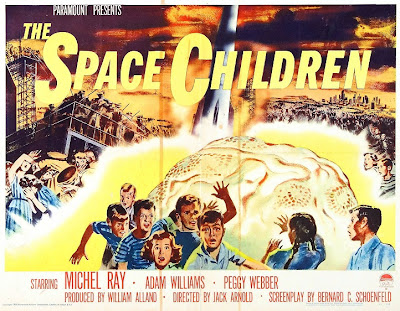 At a top secret military missile project, some of the worker's children spot a light from the sky that adults can't see. Following it down, they discover a glowing brain in a cave by the sea. Telepathically, it begins to communicate with them, bringing them into conflict with their parents.

After It Came From Outer Space, Creature From the Black Lagoon, Tarantula, and The Incredible Shrinking Man, The Space Children is probably the least well known of director Jack Arnold's films, in a magnificent run of iconic fifties sci-fi for producer William Alland.

While this is less elaborate than the previous films, it's rich in ideas and tougher on 'message'. Radiation hazards and damaged ecology figured in the background of the earlier films, but here the danger is spelled out. There are also children battling their parents, at a time when movie teenagers were only just attempting freedom from their families. Like The Day the Earth Stood Still, this is about extra-terrestrials (and scriptwriters) who aren't very happy with nuclear proliferation.

The telepathic abilities of the children aren't as creepy as in Village of the Damned, but the story elements were certainly similar. John Wyndham's book 'The Midwich Cuckoos' had only been published the year before... Hmm. There's even a throwaway reference that other groups of children are acting the same way in other parts of the world. Standing shoulder to shoulder against their parents, and the Army (!), I was strongly reminded of Children of the Damned. 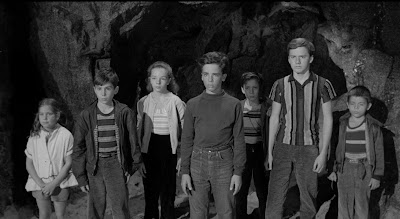 But of course, an invisible alien is no good to 1950s' American sci-fi, they wanted visible aliens! A theme that continued throughout The Outer Limits. Sci-fi couldn't be sci-fi without a monster of the week! And what better fifties' alien could there be than a giant, pulsing glowing brain. Previous movies had featured bodiless brains, sitting in fish tanks, causing telepathic mayhem. They even glowed, purely for cinematic effect rather than any logical reason. This one glows very brightly because it's from outer space (I guess). It glows and grows, resembling a rival to The Blob, born the same year. This creature is less agile, but not without a few surprises up its sleeve... 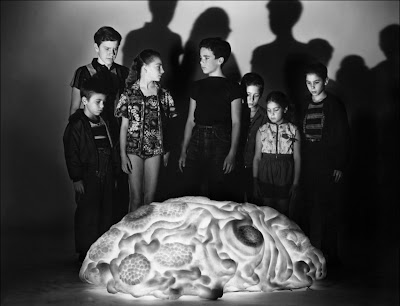 Among the space children, Sandy Descher had already had a memorable sci-fi role as the little girl who staggers out of the desert screaming "Them!" (in Them!). Also fun to see Uncle Fester (Jackie Coogan) with hair, well some hair.

This is a small, atomic age sci-fi, gently hard-hitting (somewhere between anti-military and child-beating) but presumably much more anti-establishment at the time. Strange that this should beat Arnold's far more famous classics to Blu-ray (though Creature from the Black Lagoon is about to hit and in its original 3D). But The Space Children never hit DVD, and for years has only been seen on the receiving end of a Mystery Science Theater 3000 drubbing. Depending on mood, I can enjoy many of the MST3K targets in either their original form, or I can enjoy them being ripped. 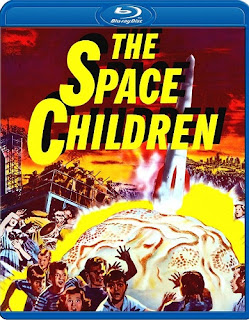 The Space Children is presented on Blu-ray as 16:9, occasionally looking tight at the top and bottom of frame, but not a problem though. There are no extras, but it's not an expensive release either. I'm just happy to see it again, non-MST3K.

Olive Films have also released the lumbering but ultimately touching The Colossus of New York and William Castle's semi-animated, sci-fi oddity Project X from the same era, both also on Blu-ray.