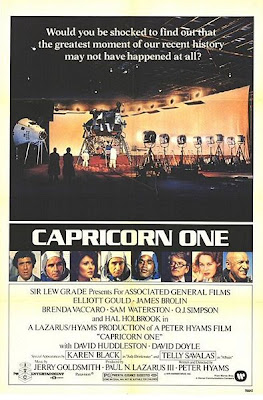 CAPRICORN ONE
(1978, USA)
What was intended as a satirical thriller has now fuelled conspiracy theorists' claim that the Moon landings were staged for the cameras. At the time Capricorn One was released, this was a wry and cheeky premise. That anyone now believes those incredible achievements were all a fake is more incredible than the Moon missions themselves.

Three astronauts are about to take off for a mission to Mars when the project leader hauls them out of the command capsule and whisks them away to a secret location. The life support system is faulty and the project has no hope of being successful. Unless the astronauts all agree to fake the broadcasts from a mock-up capsule and a huge studio set of the Mars planet surface... 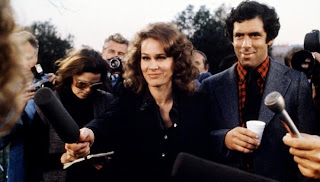 The central premise of a large-scale cover-up is played deadly seriously, but the sub-plot of an investigative journalist (Elliott Gould) who smells a rat is mostly played for laughs. There's also enough action here to please a mainstream audience.

While the faking of an entire space mission fails to be convincing, (there are simply too many loopholes), what remains chilling are the lengths the government will go to in hushing it all up. Everyone is expendable. The inspired use of two impersonal helicopters, seemingly communicating like airborne robots, symbolises a military organisation with a mission to eradicate all remaining clues. One character completely disappears with a believable, elaborate cover-up to replace any memories that he ever lived in his apartment.

Having grown up with the Moon missions live on TV, the idea of it all being faked is a non-starter for me. As a family, we visited Cape Kennedy (as it was called in 1973) and again, renamed as Cape Canaveral, in 1978 (ironically on the same holiday I first saw Capricorn One in a Miami theater). I remember the scene in the film, a long trackback that revealed the surface of Mars as a movie set, getting laughs in the cinema. It's a neat idea for a conspiracy thriller and a welcome change from the Kennedy-assassination plots, but even back then it was ludicrous. 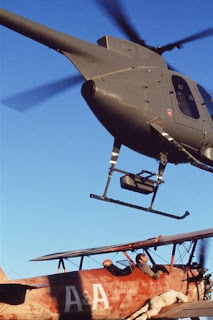 While a silly runaway car stunt now fails to excite, mainly due to the amount of sped-up footage, the high speed aerial chase is one of the best there is. A dizzying helicopter pursuit, brilliantly photographed with superb stunt-flying. In the cinema you could easily feel airsick as the aircraft dive over the edges of the canyons. Jerry Goldsmith's pounding score is one of my favourite movie soundtracks. His music easily makes the action twice as dramatic.

I was wary of characters played by Hal Holbrook after this film. Here he's a bare-faced liar who still wants to be your friend and, dammit, I trusted him. 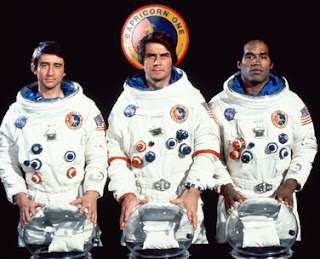 James Brolin, back when he headlined movies (Westworld, The Car, The Amityville Horror), is great - he looks like an astronaut. But so do Sam Waterston  and O.J. Simpson. The cast is almost too good, Karen Black and Telly Savalas deserve bigger roles than very funny cameos. Brenda Vaccaro (Death Weekend, Airport '77) is excellent as an astronaut's wife being kept in the dark, giving even her quietest scenes an edge. 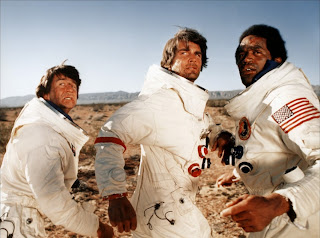 I thought I'd be in safe hands with director Peter Hyams after this film and Outland (1981), but his subsequent thrillers and sci-fis have disappointed, though I know The Relic, End Of Days and Timecop have their fans. I remember enjoying the Sean Connery thriller The Presidio and I'm going to give the 2001: A Space Odyssey sequel, 2010, another look. 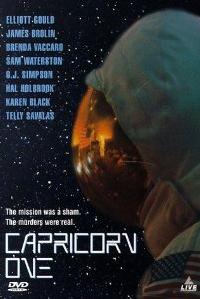 Capricorn One should be one of those solidly entertaining movies that's always in print. But it's 1998 DVD incarnation (pictured) showed desperate need for remastering - a distracting amount of much film weave and neg faults, too tightly cropped on all sides. The recent UK blu-ray look much the same as the 1998 release, with a careless amount of compression faults presumably being triggered by an old film-to-tape transfer. At least the blu-ray is anamorphic widescreen, but it's not even a good enough transfer for a DVD.

Hopefully the US Special Edition DVD of 2008 looks better. Which would make it a quadruple dip for me...

Snappy TV trailer here on YouTube - no spoilers (note that the film is actually 2.35 widescreen)...