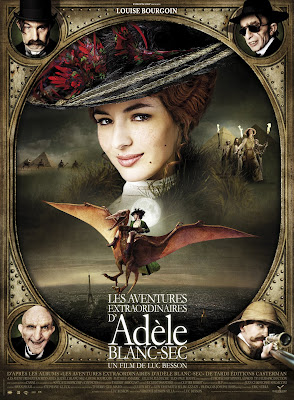 A great film while you wait for Spielberg's Tintin. This adaption of a French graphic novel will also make an interesting comparison in many ways. Besson uses actors to represent comic book characters rather than the far more expensive motion-captured, computer-generated people for Tintin.

That's not to say there aren't extensive visual effects in Adèle. CGI portrays impossible characters, like the pterodactyl. Digital compositing is used to present Paris and Egypt of a hundred years ago. For the more grotesque and bizarre human characters, prosthetic make-ups are used. 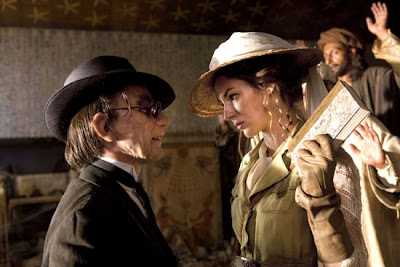 Adèle is on a trip to Peru to complete her latest book. That's what her publisher thinks. She's actually in Egypt raiding tombs. Why has she lied, and what has this to do with a pterodactyl terrorising Paris? The police can't believe that a prehistoric animal has killed a senior politician, they need to solve the case fast, no matter how much Adèle gets in their way. 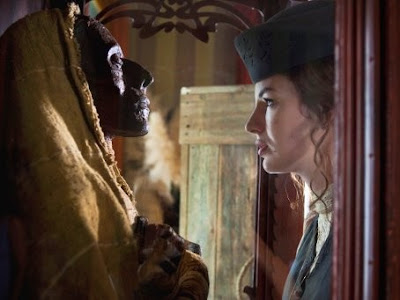 Like the Tintin stories, there's a detailed and realistic presentation of the past, but with more magical and fantasy elements. Like Tintin, Adèle is also a writer, giving her the opportunity to travel. Her only real strength is her personality - she doesn't bow to convention. It may not be ladylike to ride a camel, but if she needs to learn, she will. With a burning desire to succeed, she overcomes the odds with little more than an umbrella and a bag of bird seed... 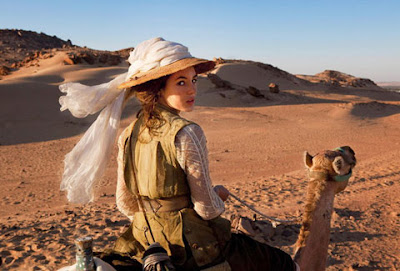 As a newcomer to the stories, I loved the completely unpredictable nature of the story, and it's always nice to see a guillotine in action. This wasn't as consistently funny as it wanted to be, but maybe I was missing out on the Frenchier in-jokes. It could almost be a family film, though some of the more intense drama and some casual nudity might not be for younger viewers. Film Forager has a tougher review, here. Personally we're holding out hopefully for a blu-ray with English subs.

Besson mentioned that this story was a childhood favourite of his. He spent many years gaining the trust of the author, Jacques Tardi, who'd already dealt with three film studios trying to adapt the story. While this isn't as dark or as adult as many of Besson's earlier films, I think that's because he's committed himself to being as faithful to the original story as possible. While he's more likely to be the producer nowadays, after writing the script he couldn't let another director make this one. 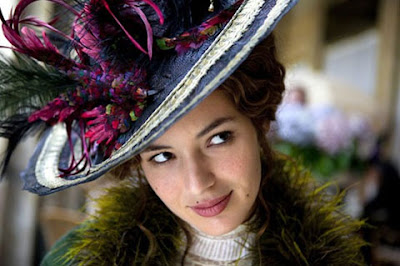 I haven't read the comics yet, but I will. Actress Louise Bourgoin is far more beautiful than the grumpy character in the comics. The first two stories (which combined to form the basis for the film) have been translated into English as one volume. There's a little more about Jacques Tardi's original stories here. 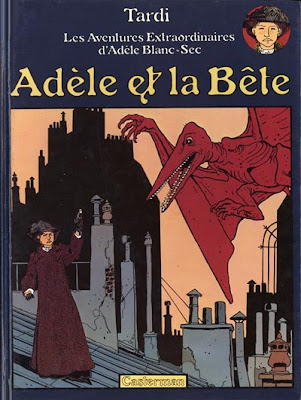 After the screening, Luc Besson held an informal question and answer session that touched on many stages of his career. Movies hadn't been a part of his childhood at all. His parents (both divers) didn't even have a TV. The nearest cinema was far away. But after seeing a movie on a daytrip to Paris, he immediately fell in love with the medium and left home to make movies for himself.
Subway (1985) was based on characters he actually met when he opened a maintenance door in the Paris Metro and disappeared for two days while meeting a whole community living down there. He didn't now think that the film was a satisfying 'whole', as much as a patchwork of several stories he'd written.

The diving experience he'd learnt with his parents led to The Big Blue (1988) and Atlantis (1991), though he doesn't think he'll ever do another underwater film now. He doesn't enjoy directing anything similar to previous projects, unless he thinks he can learn from them. This partly explains why he has been producing so many projects.

When asked if he was flattered by the (three) remakes of La Femme Nikita (1990), he said he would be if any of them had been any good (laughs). It also wasn't a favourite film of his because he had to rewrite and reshoot the ending at the last minute, and that wasn't a great way to make a film.

He dismissed the suggested idea of a sequel to Leon: The Professional (1994) unless a good idea for a story came along. He hinted that there was a demand for one because it would make money.

The films he'd made that he was most satisfied with were the ones that turned out the way he'd imagined them - he named The Messenger: The Story of Joan of Arc (1999) and Angel-A (2005).

He's currently finishing work on The Lady, starring Michelle Yeoh and David Thewliss, and said he was trying to get it ready for a November release. After that, he was interested in maybe another sci-fi story. He described the frustration of filming the intricate special effects for The Fifth Element, just before the digital revolution would have made them far easier. Being dependent on motion-control cameras and modelwork, he felt his camera moves were being too restricted. 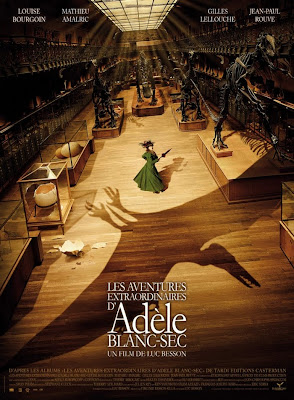 The Extraordinary Adventures of Adèle Blanc-Sec is already out on DVD in many countries, having been released around Europe and Asia last year. Besson presented this screening on March 19th at BFI SouthBank to promote Optimum's UK release in April. Doesn't look like the film has yet launched in the US.

Here's an original trailer on YouTube, no English subtitles but not much dialogue either...