A futuristic underwater sealab is having problems with a UFO that's parked between them and a nearby deep ocean trench. As they investigate, they attract the unwanted attention of a dangerous creature who puts the scientists and crew in danger. No, it’s not The Abyss. It’s more like a wet rip of IT! The Terror From Beyond Space.

Wow, this was bad. The only real thing going for this monster movie is the monster. A wild and imaginative bug-eyed amphibian that would look comfortable in Mars Attacks! It looks great in photos. The unusual back of the costume is so big it presumably hides an aqualung cylinder - remember, The Creature from the Black Lagoon had no such luxury, and stuntman Ricou Browning had to hold his breath for every shot!

The alien underwater creature costume also capitalises on this movie being in COLOUR, with it sporting bright orange fins. But the story and everything else has had far less effort lavished on it. The underwater models of the sealab are ridiculously small, and look exactly the size they are. The producers could at least have studied the TV series Voyage to the Bottom of the Sea a little closer, for tips.

Speaking of TV, this looks like an early TV movie, mostly a TV cast, TV-friendly aspect ratio, and tame on the violence... 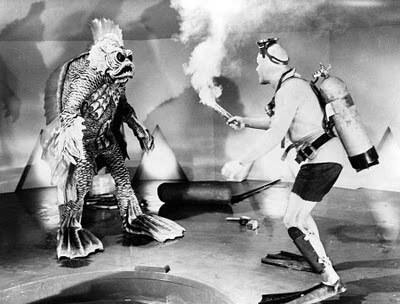 The only faces I recognised were Wende Wagner, (one of the few interesting things in The Green Hornet TV show, besides Bruce Lee) and James Hong as a comedy chef. At least he’d seen the movie Voyage to the Bottom of the Sea - why else would he have a parrot on his shoulder? I'm pretty sure he'd rather be remembered for his performance in Blade Runner. 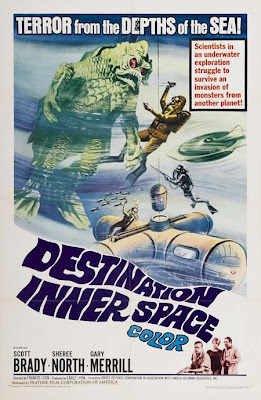 I rewatched Destination Inner Space to remind myself what it was like, and to see the wonderful monster again. I’d seen it back in the seventies on TV - when monster movies were so rare, they became must-sees. But now it's only entertaining for the stupid logic, shaky science and ridiculous stereotypes.

It's not on DVD, which is unfair because there's a lot, lot worse out there.

Email ThisBlogThis!Share to TwitterShare to FacebookShare to Pinterest
Labels: monsters, NOT ON DVD, sci-fi