THE UFO INCIDENT (1975) - the mother of alien abduction stories 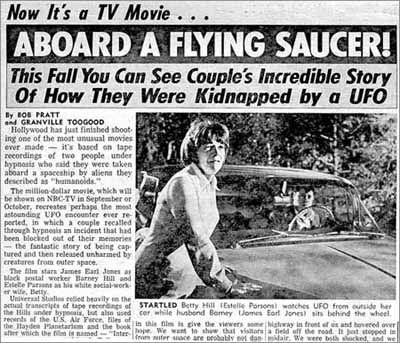 First recreation of a reported alien abduction - never been on DVD

This a compelling, well-produced TV movie that features an early conception of what 'grey' visitors look like and introduced the 'alien abduction' to millions of viewers, presenting it as actual events on prime-time. Whether or not all of it's true, the cultural influence of this story is huge. Before it, there'd been documentaries about UFO sightings, but here it's powerfully dramatised. First contact with an extraterrestrial civilisation, presented as a factual possibility.

Betty and Barney Hill were driving home from Montreal to Portsmouth, New Hampshire at night, when they saw an unidentified flying object. A few miles on they heard a beeping sound and both suffered amnesia (an unusual phenomenon in itself) about what happened next, arriving home in a daze two hours later than planned. After two years of nightmares and anxiety-related illness, they sought professional help and, through hypnosis, recovered memories of the lost hours from that night. They remember being stopped in the road and led into an alien spacecraft... 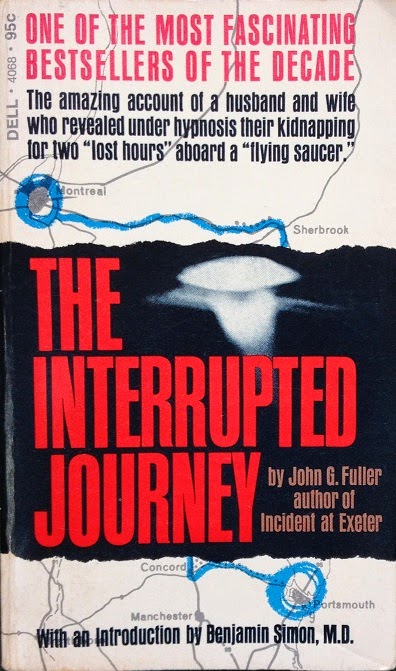 Many films say they're based on a true story, then distort the truth to make a better story. But The UFO Incident doesn't need to invent anything to be a gripping drama. It's based on a book containing many of the actual transcripts of the Hills' hypnosis sessions. The Interrupted Journey (1966) is written by the psychiatrist himself, who saw his job as evaluating what happened to the couple, but mainly to alleviate their anxieties over these repressed memories. The book and the film is open-minded to the possible truths behind their memories. Much of the script is taken word-for-word from their taped psychiatric sessions. As films based on true stories go, this is one of the most faithful there is.


It's up to the viewer to decide what the Hills are remembering under hypnosis. Flashbacks recreate their memories, but are they dreams or experiences? The emotional reactions from them not wanting to remember and the shock realisation over what they saw is down to James Earl Jones' and Estelle Parsons' extraordinary performances, filmed in very long takes. 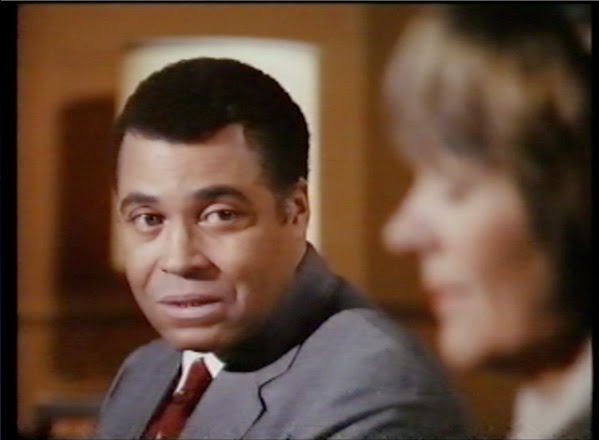 According to the full-page review in Cinefantastique magazine (volume 5, number 1, 1976), James Earl Jones (above) bought the rights to the story and spent two years trying to get it made as a feature film, before settling for a TV movie. His work isn't reflected in the brief onscreen credits though. Jones even travelled the roads around the abduction site in preparation for the part. 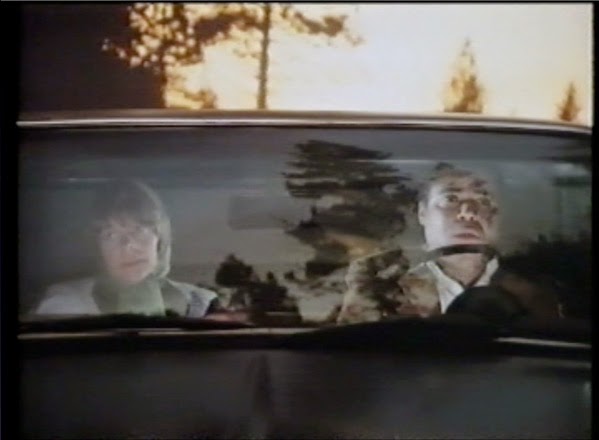 The film packs in as many of the book's highlights and conjectures as possible, but I was clearer about the timeline of events after reading the book as well. It adds some consistent details about the visitors' motives. The aliens have no concept of age or dying (which fits in with extended years of space travel) and are only visiting Earth to collect a few samples - they say they won't be back! Betty's recovered memories are so rich in detail, the internal logic is too good to be from a dream. For instance Betty wants to stay with Barney while he's being examined, but she also wants to leave the spaceship as soon as possible. The alien leader argues that if she is examined at the same time as her husband, she'll be out of there faster! 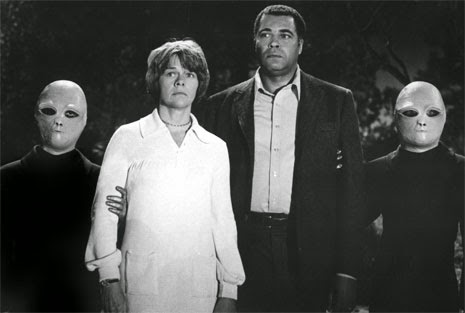 It's a dramatic, involving and frightening movie that derives its strength from close ups of the couple under hypnosis, far more than what they actually see. Their memories are often seen only in flashes, which also means we don't dwell on the costumes and special effects too much. The budget certainly isn't Close Encounters, but it's better than Project U.F.O. because of the superior performances that sell the shocks. There are some beautiful lighting effects used to infer the pursuit by the ship that I'd love to see clearer (the YouTube files are quite vlurry). Incidentally, Greg Jein, one of the main modelmakers on Close Encounters, built the spaceship forest diorama glimpsed in The UFO Incident (below). 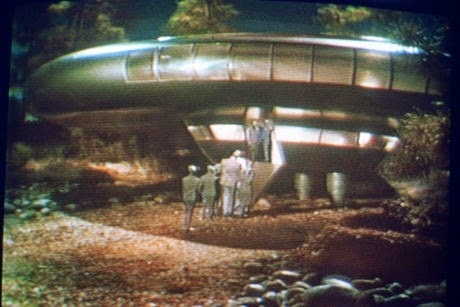 The significance of this case is wide-ranging, and the book and film are definitely important culturally, if not scientifically. This may not be the first reported story of an alien abduction, but because there are two witnesses it was taken more seriously. It fed into a widespread UFO paranoia, predating many similar reports and variations of abductions, and popularised the use of hypnotic regression. It also champions the idea that aliens won't harm us - the view soon to be expressed in Close Encounters of the Third Kind (1977) and by 'visitor' cults and religions.

Two years on, Ridley Scott's Alien (1979) turned the tables again and 'abductions', a weird term for an event where you're borrowed for a few hours, turned hostile again. Despite the warm fuzziness of E.T. The Extra-terrestrial, most spaceship interiors signified terrifying experiences, as seen in Communion, Fire In The Sky and The X Files.

So, The UFO Incident is an important milestone of the genre and worth watching as a drama, but is it a true story? The Hills (pictured below) weren't motivated to make this all up for personal gain. Both of them had steady jobs and Barney was also involved in civil rights campaigning. They didn't want the story getting out because of ridicule. They didn't sell their story and worked hard to keep it out of the public eye. The book was only published to set the record straight after the story was leaked to the press. 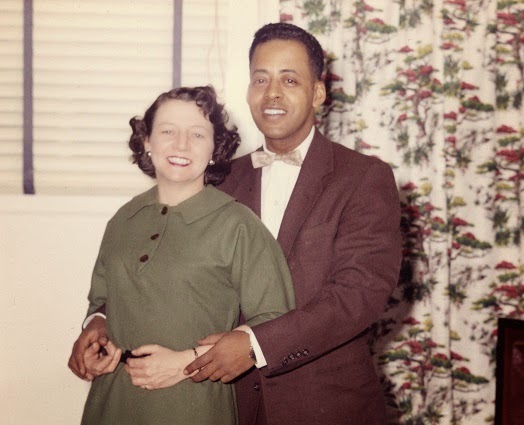 As with many stories of UFOs, I think the context of human perceptions framed by public knowledge and popular culture holds many answers, possibly revealed in the earlier cultural timeline. The film was made in 1975 but the abduction took place in 1961. (Why did it take so long to become a film?)

Betty and Barney Hill were driving home on September 19th, 1961 when they spotted a light in the sky. The way it was moving ruled out that it was a light aircraft. They thought it might be a helicopter though they couldn't hear a motor. Barney looks at it through binoculars and thinks its a UFO. But their conclusion is already being formed by many earlier reports of UFOs in that area. Betty's sister had already seen one, so they were already primed to conclude that that's what it was. 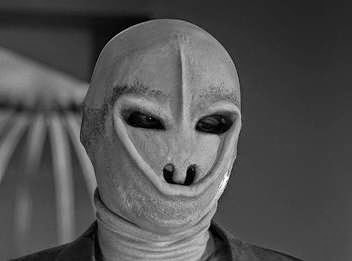 The Twilight Zone episode 'Hocus Pocus and Frisby'
premiered May 1962, between their abduction and hypnosis

On TV, many episodes of The Twilight Zone featured spaceships and alien visitors similar to the ones they describe, not to mention hundreds of pulp novels with imaginative cover art, cartoons and the sci-fi feature films of the previous decade. This Island Earth (1955) and Invaders From Mars (1954) both feature abductions, the latter a table examination with a needle probe. The Day The Earth Stood Still (1951) has the same circular corridors and ramp that they described inside the spaceship. These films and TV episodes could all provide a library of visual experiences to be remembered later on. Whether the Hills saw any of these or not, the images might also have been on posters, in newspapers and TV guides.

While they claim amnesia for most of the ride home, Betty had very vivid dreams over the next few weeks, detailing her walking into the spaceship and speaking telepathically with the alien visitors on board. She then writes down these dreams.  I don't know what extra detail she remembers under hypnosis, other than that it was real rather than a dream. She also contacted her sister, who had seen a UFO, and then Project Blue Book takes a statement of their sighting. Those guys may also have quizzed them with leading questions, adding detail to what they could have seen. Barney also read a book about UFO experiences (Donald Keyhoe's 'The Flying Saucer Conspiracy'). 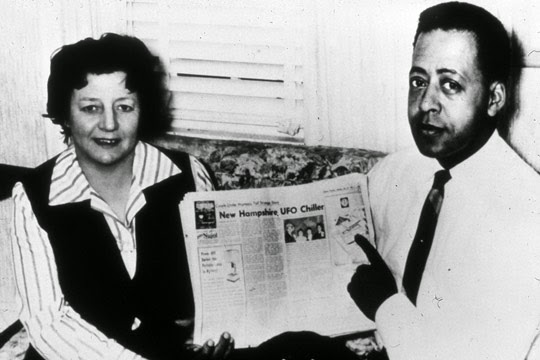 All this happens in the two years before the taped hypnotisms, the couple have potentially filled themselves up with memories by December 1963. By which time, The Outer Limits is also on TV - featuring a different alien creature every week! (The episode 'The Bellero Shield' featuring a grey alien with a streamlined head premiered the week before the Hills' second hypnotic session.) Their two missing hours could also be explained by their repeatedly stopping the car and getting lost on the way home.

While their experiences are broadly the same, this could be explained that Betty has been talking about her nightmares with Barney. In any case, the psychiatrist doesn't cross-examine them closely on the details once they're inside the ship (Betty mentions that the examiner took out Barney's false teeth, but the psychiatrist fails to check if Barney also remembered that incident). The opportunity to get two distinct accounts is further tainted when he plays back all their trance-like recordings back to them, once they're awake.

I was struck that their descriptions of the abduction is dreamlike, mirroring their state under hypnosis - they are barely awake when they are dragged into the ship. The aliens also use hypnotic suggestion on them to cooperate. Betty mentions that the aliens talk to her without talking (infering telepathy) but also much like we communicate with characters in our dream.

The psychiatrist questioning Betty parallels the alien leader interrogating her. There's even a moment in the book when Betty is in an alien waiting room while Barney is still being examined (this is when she asks about the star map). A parallel experience with her hypnotism session happening after Barney's. 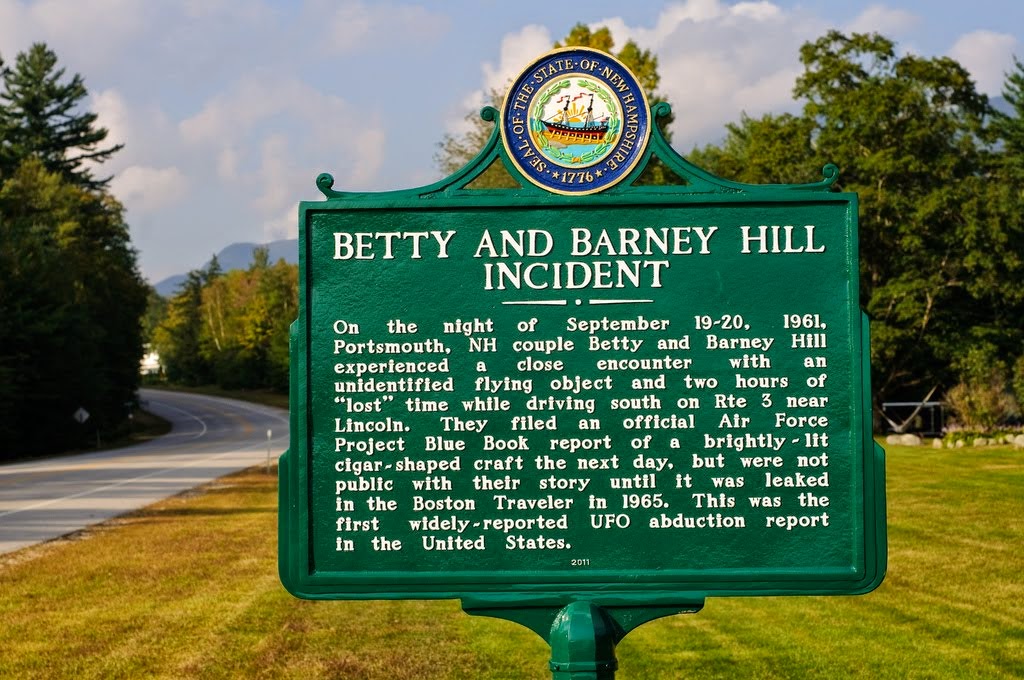 But these stories are fascinating, and the film and book stress the possible multitude of reasons for their recalled experiences. An extraordinary case dealt with sympathetically though intelligently. The abduction experience overshadows what just happened when they were conscious - a UFO that they observed over several miles that seemed to be following the car. Barney even stares at it through binoculars, observing a window with several figures inside!

I wish it were a true story. But projecting wishes onto what I've seen in this movie is probably the same mechanism that started this all in the first place. 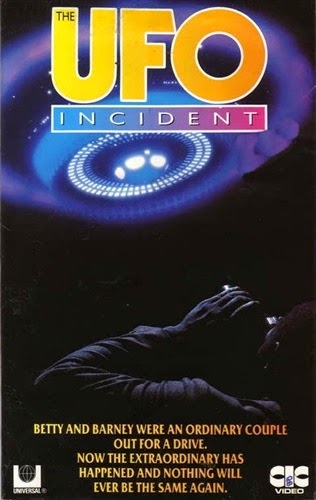 The cover scans I've seen of this on sale online make me think that The UFO Incident has never officially been on DVD. All the art looks like bootleg. Though there's this NTSC VHS sleeve (above) that indicates it had a home video release. But it should really be on DVD, rather than the fuzzy, jumpy TV recordings that are currently on YouTube.