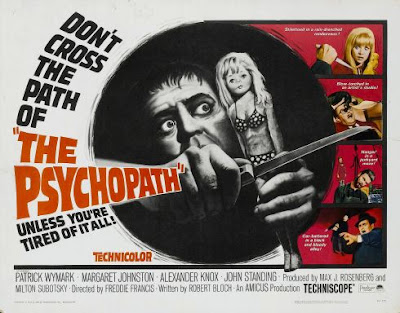 Amicus Studios became successful once Hammer Films had attracted international attention to British horror in the 1950s. Continuing through the 60s and 70s, Amicus didn't copy Hammer's style, distinguishing themselves with modern settings and their 'short sharp shock' compendium horrors.

Like Hammer, most Amicus films have been released on DVD, but I've just been reminded by dedicated horror publisher Johnny Mains (on Twitter as @noose&gibbet ) that a couple have been left behind. Sometimes, when  nostalgic mini-genres are plundered, they leave out the shit ones. That's not the case here, The Psychopath deserves to be regarded as an Amicus classic.

A small group of suited men collect in a drawing room to play a music recital (it gets better). But one seat is empty, the violinist late. Because he's been savagely run down in the street, repeatedly run over by a car. The police investigate immediately, a Detective (Patrick Wymark) quizzes the victim's fellow musicians. None of them have watertight alibis, all of them act suspiciously. The killer has also left a doll at the scene of the crime, an exact likeness of the dead man. This isn't the work of a murderer, but a psychopath... 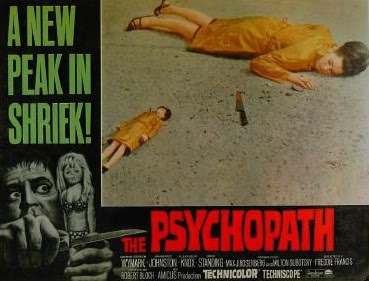 Yes, it starts as a murder mystery, but in the same way that later Italian giallo amp up the violence and variety of the murders, The Psychopath is easily elevated horror status. There's also a depiction of madness which, taken to extremes by a few masterful actors, gives us what I lazily call 'horror acting'. Many performances by Michael Gough, Conrad Veidt and Freda Jackson can be described as over-acting. To me they're reaching the glorious heights of their characters' insanity, and briefly taking you with them.

One such performance in The Psychopath reminded me strongly of the style of acting in Psychoville 2, which I've only just watched. Several other elements of the film, like the old lady talking to her dolls, and the effete owner of a toyshop, convinced me that this has to be in the collections of either Reece Shearsmith or Steve Pemberton, formerly of The League of Gentlemen. 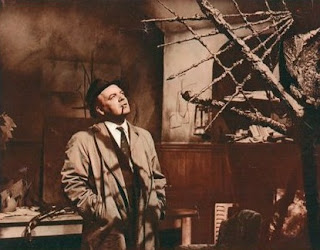 Patrick Wymark plays the police inspector who should really be fired because so many people are dying while he's still puzzling it all out. Wymark is the anchor of the film, seedily brilliant in both Polanski's Repulsion and Amicus' The Skull, but just as happy in a wig in period horrors Witchfinder General and Blood on Satan's Claw (1971). Sad to note he passed away aged 50, in 1970 when he was still in demand for a wide variety of work.

Among the suspects are Alexander Knox, who I mainly know as the US President from You Only Live Twice. Hammer regular Thorley Walters (Vampire Circus, Frankenstein Created Women) doing less comedy schtick than usual. Judy Huxtable, so unlucky in Scream and Scream Again (1970). 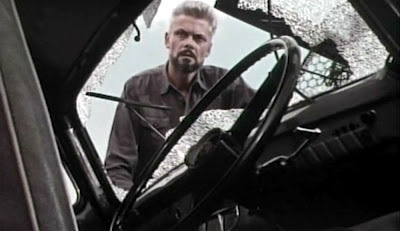 The distinctive-looking Robert Crewdson, again sporting his weird beard and grey hair - a look I thought he'd created for the alien, Medra, in The Night Caller (1965) - but this must be how he looked that year!

Particularly good to see Margaret Johnston again, after her subtle menace in the classic Night of the Eagle (1962), and a youthful John Standing before his creepy turns in Torture Garden (1967) and The Legacy (1978). 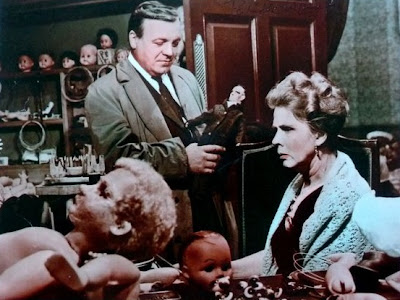 The Amicus atmosphere is evoked by a soundtrack from Elisabeth Lutyens, who did such wonderful work on Dr. Terror's House of Horrors (1965), writer Robert Bloch (The House That Dripped Blood, Torture Garden and of course Psycho) and director Freddie Francis, here given time to take care over the 2.35 compositions, even though he wasn't behind the camera. There's a wonderful scene in the house of dolls that mirrors a moment in Blade Runner, when it's hard to distinguish the mannequins from the real thing.


The vicious opening murder by car pre-empts the very similar start of Terence Young's Hollywood thriller Wait Until Dark (1967). And there's a prominently bare-backed young lady, the year before Vanessa Redgrave caused a fuss by being similarly undressed in Blow Up.

The Psychopath is for fans of the Hammer 'psycho' films, 1960s British horror, German krimis and early giallo. I believe it's shown by Turner Movies in some countries. Sometimes, it appears on YouTube, slightly cropped at the sides. Of course, I'd really love it on blu-ray. Amicus boxset anyone? 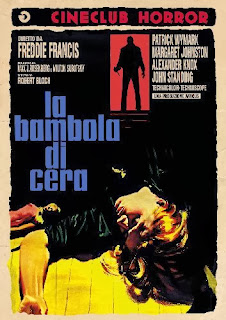 Update, November 2013
A Twitter colleague suggested this Italian DVD of The Psychopath, titled La Bambola Di Cera. It has English audio, but with the same tight framing at the sides (from 2.35 to 16:9?). The picture is also soft and the colours weak. But it's the only known DVD out there. Until a properly framed restoration happens I'll still, cheekily, list this as not-on-DVD.

Email ThisBlogThis!Share to TwitterShare to FacebookShare to Pinterest
Labels: 1960s, Amicus, NOT ON DVD